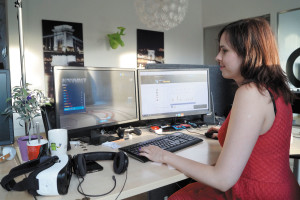 Gamers are boys who live in dark basements eating chips and drinking cola, or so goes the prejudice. Five young women are on a mission to prove that girls can be just as good at video games – or even better.

Usually games are programmed at Nemesys Games near the Semmelweis University like there’s no tomorrow. But in the past few months there has been a fresh wind in the offices of the game manufacturer. Five females who call themselves “Queens of Game” decided to make their head office there.
“We all have different interests but one thing unites us, namely the gaming,” says Zsófia Páll. Since September last year, the small group has been reporting on social media about what’s going on in the video games scene. The young women lead the project part time, as they usually work in school, study or write for magazines. The particular focus is not generally on any games but on e-sport. For many, the term may be new but this particular form of sport is very successful worldwide.
esports can roughly be summarised as all kinds of digital competitions in computer games. It has its origin in Asia. There esports matches are even televised partially. One big organiser for tournaments is the specially created Electronics Sports League.
It is called a sport because the players have to master different motor and mental skills in addition to the mastery of the actual computer game to be successful. Therefore they need good hand-eye co-ordination, reaction speed and stamina. 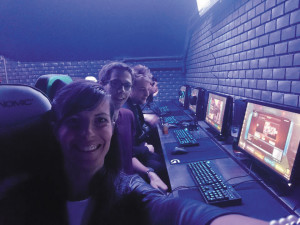 Is e-sport a real sport?

When it comes to e-sport, there are always two opinions: on the one hand there is the latest news such as the establishment of the World Esports Association (WESA), which wants to organise esports as even more professional; the German broadcaster ProSieben, which brings matches to television screens; and the famous German soccer team Schalke 04, which has its own team in an esports league.
Then there is the other opinion, which struggles against the classification of e-sport as a real sport. Critics say esports are not sports, players are not athletes, and the teams and structures are not professional.
“Is chess even recognised as a sport?” says a visibly upset Páll, who is a games journalist. She and her colleagues know these discussions. They do not understand why acceptance is still so low. “It takes a lot of reflexes and sportsmanship for it,” the 27-year-old says.
She experiences this sportsmanship again and again when she produces videos or interviews about local competitions. The reports are then posted on the internet. The “Queens of Game” inspire more than 3000 fans on Facebook and many more on their YouTube channel.
They have a special mission: “We would like to point out that not only men play video games and we want to fight against this prejudice,” Páll says. In particular many male gamers still believe there is no place for women in the video games scene. “For them, it is for example a shame if a woman conquered a man while gaming,” she says – especially when a girl beats a man in the popular game “FIFA”. 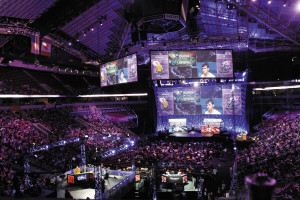 Still the esports scene is dominated by men. Therefore tournaments were introduced to include female players in the scene. Meanwhile women can also win considerable prize money at tournaments. Even Hungary is known for its “pro gamers”, which means professional gamers.
Nikolett Keszeli, who calls herself “nylon”, is successful around the globe, and with a game that polarises society. “Counter-Strike” is a so-called “first person shooter” and is about the battle between terrorist groups and an anti-terrorist unit. It is one of the most successful games for years but critics often call it a “killer game” that could lead to making young people aggressive.
“That’s nonsense,” says Páll, who has done research at university on the topic. “People blow off steam when they play it.”
She says Hungarians love video games and for a small country the scene here is very large. The 25-year-old Hungarian Valentin Váczi is known internationally. But László Bényi has another opinion. He is the chief editor of IGN, a website that focuses on video games. “The scene exists but I would not say that it is large,” the journalist states.
Although more and more people want to make the scene bigger in Hungary, there is still a lack of sponsors and organised events to compete internationally. “In order to make esports really famous in Hungary, it does not necessarily need more money but simply someone who has the motivation to bring it on a higher level,” says Bényi.
Although there are some companies, such as the computer manufacturer Lenovo, that want to organise large events in Hungary, everything is still in its infancy. As editor, Bényi notices how difficult it is to make esports here more popular even when it comes to the reporting. “Really good e-athletes want to read other things than casual players,” he says. 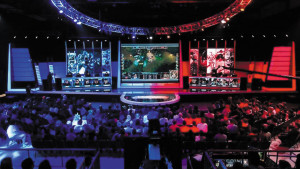 Páll and her team try to address both gamer groups. They produce weekly videos in which they summarise news and comment on their Facebook page. And they get a lot of praise, which really surprised them.
“Recently a girl spoke to me in the metro and said she and her mother are big fans of us.” Of course, there are also (usually male) players who spill out their hatred of female players. “But that´s the internet,” sighs Páll.
The young women are following the trend to successfully use social media as a platform. With a total of more than 52,000 views the “Queens of Game” cannot compete with the world’s most successful YouTube stars, but the numbers are growing and growing. “We want to create more for the community to connect us with them.”
They are convinced their mission will succeed and together they will show how strong female gamers can be. “And that’s what we enjoy,” says a happy Páll.