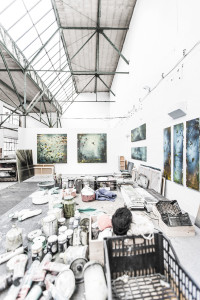 Humanity’s desire to travel and discover can be traced back to ancient times. In addition to explorers and scientists, the figure of the artist has also been paired with the image of the world traveler. Overwhelmed by the innate urge to be on the move and driven by the wish to broaden their intellectual horizon and expand on their social network, artists frequently embark on opportunities that provide them with international exposure. The cherished aspiration of Hungarian professional fine artist Márta Kucsora to collaborate with New York-based artist Hosook Kang evolved as a result of participating in an international mobility program. Let her anecdote stand as an example of fulfilled hopes.

Over the last decades, mapping the global art scene while undertaking sojourns in foreign lands is no longer viewed as a sporadic element in a life of an artist, but embodies a vital role in the regular operation of the creative spirit. Owing to the proliferation of cultural mobility schemes and bursaries, cross-border movement has become a reality for many artists, paving the way to set career goals, create their personal vision and make their dreams come true.
Kucsora was awarded a merit-based scholarship for her academic achievements in 2004 that enabled her to pursue education away from her customary environment. She was admitted to Montclair State University in New Jersey to further her studies and obtain a Master of Fine Arts degree.
Besides completing the curriculum in 2005-2006, she carried out active research and observed the cultural milieu of the region. She had been following the work of Sundaram Tagore Gallery – based in New York, Hong Kong and Singapore – for years, but it was the international experience that allowed her to get acquainted with the agenda and artist roster of the gallery more profoundly.
The works of Hosook Kang, paintress of Korean descent, were of special interest to her due to the mastery of execution and the sense of reverence her pieces evoke.
In 2013 Kucsora, along with her artist colleagues Dóra Juhász and Sándor Szász, co-founded the international artist residency program of Budapest Art Factory, which welcomes eminent representatives from the field of contemporary art – by way of illustration, the list of former residents includes Andy Denzler, Martin Kobe and Peter Peri et al. 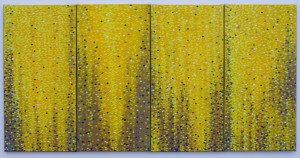 The program is crystallised around the notion of cross-cultural co-operation and is dedicated to publicise the artistic excellence of its guests through exhibitions and artist talks. Since its inception, the non-profit organisation has undergone noteworthy developments that encouraged the founders to invite Hosook Kang in 2016 for a six-week residency, bringing Kucsora’s dream – to host the highly esteemed artist at the studio complex and promote her work in Budapest – to fruition.
In fact, it is possible to highlight some similarities in Kang’s and Kucsora’s oeuvres. The most evident common denominator of their work is the commitment to epitomise the pristine forces of nature by amplifying the qualities of its multifaceted configurations. Both artists depict the substances of the natural world with the visual language of abstract art, which allows the volatile, changeable elements a level of sovereignty from the referred phenomena.
Their artistic output features three-dimensional illusion facilitated by the interplay of bold colours, ranging from bright corals, pacific blues to warm golds. Nonetheless, the organic motifs of the two artists are applied in a distinct manner.
Kucsora’s abstraction manifests itself through dynamic gestures, including versatile application methods such as dripping and spattering paint, the trajectory of which is uncontrolled and accidental. On the other hand, Kang’s celestial visions emerge from careful, structured pigment particles that she consciously adds in a pointillist fashion.
In her new series, Hosook Kang continued along the line of preserving her Korean heritage, in which nature is viewed as the governing principle. Her small-scale canvases attempt to unlock the ciphers of one of the most universal symbols of cosmic energy – light, the source of being.
The works created in Budapest during her residency were inspired by the daytime and nighttime views of the Hungarian capital. Her analogies not solely depict the arteries of nature, rays of light, through which life flows, but also how they interact with matter, and the colours that are generated by their synergy.
The kaleidoscope of repetitive colours mixed with shades of amber coalesces into a harmoniously fluctuating mosaic, offering the beholder alternatives how the phenomenon of optics may be perceived.
Hosook Kang’s solo exhibition titled “in Light” opens on September 14 at 6pm at the Budapest Art Factory. Visitors are welcome to view the studios of Márta Kucsora, Dóra Juhász, Sándor Szász and New York-based photographer Liz Nielsen, invited guest artist, who develops a new body of work within the residency program. Her solo exhibition will take place in February 2017 at the Horizont Gallery, Budapest.
www.budapestartfactory.com