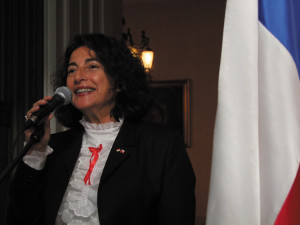 Ambassador to Hungary Verónica Chahin talks about the bilateral relationship.

Only a few South and Central American countries have embassies in Hungary. What brings Chile here?

Chile and Hungary established diplomatic relations as far ago as 1870, though suspended twice from 1943-1963 and 1973-1990. My people are deeply grateful for the warm hospitality granted to Chileans throughout our friendship, including to the Chilean political refugees of the 1970s. This long-standing relationship has been boosted by Hungary’s decision to reopen a resident embassy in Santiago in 2014, then a National Trade House in 2015 and the appointing of a commercial attaché, all in line with the “Opening to the South” policy of Prime Minister Viktor Orban´s government.  Chile and Hungary also share similar roles contributing to our regions; for instance, we are active members of the Pacific Alliance with Colombia, Mexico and Peru, as Hungary is a prominent member of V4. Culturally, both countries have high respect for education and knowledge, reflected among others in Nobel Prizes. In Chile´s case, educator and poetess Ms. Gabriela Mistral received the 1945 Prize for Literature, as did Pablo Neruda in the same field in 1971.

How are Hungary-Chile relations politically?

Excellent, with a continuous thread and expanding prospects that keep us very active daily. The potential is enormous and thus, after my first year in Budapest, my focus is to push forward with further initiatives to facilitate mutual knowledge through participating in seminars, fairs, academic and other exchanges. Youngsters are the future citizens and they have the tools and means to travel the world. They are curious and seek constantly for better life in a global context, going well beyond their country´s borders if compared to their parents.  This is happening as well in Hungary and in Chile. This is where we, the public servants known as diplomats – who I refer to as “social engineers” – have to contribute to build the conditions for a more fluid and fruitful shared knowledge and understanding. For me, it becomes essential to be able to grow and expand stronger bilateral relations, and to answer to the people´s needs having always in mind the future generations.

How does your embassy promote Chile?

Chile is interested in developing further strong relations with Hungary both bilaterally and as a member of the European Union, as well as within the OECD, to which Chile also belongs. Furthermore, the whole of Central Europe has a big potential for establishing solid links, not only in the commercial and economic fields but also in human, academic, social and cultural affairs. As our peoples’ friendship stands on many memories, we believe it is important to build upon and expand that base by showing Hungarians of all walks of life the current Chilean reality. We can see that there are many unknown new opportunities for both countries, and our work in Hungary includes a series of activities and presentations in the academic, commercial, educational and cultural fields. These are also to nurture and invigorate our network of bilateral agreements, which provide frameworks for our joint advancement. I think both nations present many similarities, as it is our shared belief that democracy, peace and stability are preconditions for sustainable development and better standards of living. As middle-income countries, we have been collaborating on issues of mutual interest in the international arena such as climate change, global warming, gender, children, human rights, disarmament and sustainable development goals such as Agenda 2030.

What are the trade links between Hungary and Chile?

Chile has a GDP (PPP) of USD 25,400 per capita with an annual growth of 1.9%; its exports to Hungary include fruits, seeds, wine and spare parts, while Hungary exports to Chile manufactured goods, chemicals and agricultural produce. The European Union is Chile’s third-largest trading partner (after China and United States), with an average 2003-2014 annual trade growth of 9%.  At present, we are negotiating a wider and more ambitious strategic partnership agreement to improve on the current one, in force since 2003. In the case of Hungary, an auspicious trend of note is that trade exchange between us has significantly improved for two years in a row, from USD 60.6 million in 2014 to USD 81.4 in 2015.

Are there any business guidelines that Hungarians should know about in Chile?

Chile is open to the world, with a long history of immigration flows, integrating creativity from many cultures that allowed us to establish as early as the 1840s a stable social and economic environment. Today, clear foreign investment rules include a business environment that grants national treatment to foreigners, with Courts of Law ruling over Chileans and foreigners on equal terms. Individuals with permanent residency are allowed to vote in national elections. Chile ranks among the world´s most open economies, reaching Free Trade and Economic Complementation Agreements with 64 countries in the American continent, Asia-Pacific and Europe, as well as with sub-regions and economies. These are complemented with Double-Taxation Avoidance agreements, Agreements for Promotion and Protection of Investments, on Social Security and on human resources development through scholarship programs to study abroad, along with arrangements for cultural, Work and Holidays and visitor´s visa exemption. Last month, the World Economic Forum rated Chile as the most competitive country in Latin America. Within its region, Chile has established itself as a bridge between Latin America and the Asia-Pacific region, based on our extensive agreements network, actively involved with our other leading trading partners such as China, Japan, Korea, United States and MERCOSUR [Argentina, Brazil, Paraguay, Uruguay and Venezuela]. Further, we are members of a new generation regional integration mechanism, namely the Pacific Alliance, together with Colombia, Mexico and Peru. As an Observer of the Pacific Alliance, Hungary is looking for a strong participation role, welcoming the Alianza del Pacífico Chilean Pro Tempore Presidency call for an active engagement with the Observers.

Are there any trade agreements, visits, trade fairs, delegations?

From the several visits of authorities of both countries, I would highlight the VII Meeting of the Political Consultations Mechanism, during which Vice-ministers Riveros and Szabó reviewed our bilateral affairs and signed a Work and Holiday Arrangement. The latter will allow youngsters from both countries to increase direct mutual knowledge, by granting a one-year resident visa to travel, study and work in the other´s country. In March this year an agreement promoting academic and student exchanges was signed between the General Secretary of the Hungarian Rectors’ Conference, Zóltan Dubeczy, and his Chilean counterpart. These instruments of youth engagement support the growing interest of young Hungarians to participate with their innovative initiatives in the Chilean Start-Up Program. We are also working for Chilean students to be included in the Stipendium Hungaricum Programme. In the past three years, two presidents of the Chamber of Deputies of Chile paid working visits to Hungary. Chile also was visited by the President of the Hungarian National Assembly, and by its two last Foreign Ministers.

Are there business opportunities in Chile for Hungarians, or vice-versa?

Chile offers attractive investment openings in sectors that include mining, software, services, food industry, infrastructure, tourism and energy, particularly unconventional and sustainable power generation solutions. Stability, competitiveness, transparency and an excellent business outlook are just some of the factors that investors have taken into account in deciding to do business in Chile. As an example, the country’s projected economic growth implies increased demand for electricity, forecast to rise by around 5% a year through to 2020, creating opportunities for investment in generation, transmission and distribution systems and equipment. Over 8000 megawatts in new projects will be required by 2020. My country offers advantageous conditions for the development of alternative renewable energies, where Hungarian companies and entrepreneurs with good expertise are already participating.

Do you get many Hungarian tourists in Chile?

Hungarian passport holders do not need a visa to visit for up to 90 days. On average, around 200 Hungarians visit per month. Since 2011 the number has been permanently on the rise. The best way from Europe is with a stop in Madrid, Paris or Rome, which have direct flights to Santiago de Chile, taking around 14 hours. The eclectic mix of Chilean culture – a fusion of mostly European and Middle East immigrations and indigenous people – is very attractive to Hungarians. This and the superb natural setting, comprising deserts, glaciers, islands, Mediterranean plains and the massive Andes mountains are a magnet for eco and adventure tourism.

What else should they know?

The relative distance between both countries is fast being solved through modern technology and a broader scope of means of communications and transport. It is easier nowadays to obtain reliable information about each other, moreover when being encouraged by initiatives such as the Hungarian Government´s South Opening Policy. It is not only good wines that Chile can offer, of which my country is currently the fourth-largest global exporter, reaching 150 countries. We are also considered as one of the most dynamic, creative and stable economies, especially our wine and agro-industry exports, along with mining, fisheries and forestry. I recommend these web pages: www.thisischile.cl, www.startupchile.org and www.investchile.gob.cl

What about cultural links?

While Hungarians scientists are exploring our Atacama desert and Antarctica, your youngsters  are interested in Robinson Crusoe Island, Easter Island or other of the myriad of Chilean nature´s  beautiful scenery. Wine is very well known here, as Tokaj is gaining lots of friends there.  However, more than wine, Hungarians know about Carlos Caszely, one of Chile´s most famous historical soccer stars, who is of Hungarian descent. We also know Hungary mainly for Sándor Márai, Béla Bartók, Zoltán Kodály, Puskás Ferenc and the beauty of Budapest, with its amazing architecture, hospitable people and wonderful food; no wonder Pablo Neruda wrote a book praising Hungarian food and wine together with the beauty of this city. Increasing interest is also shown in Chile for the high quality of education and of personal safety in Hungary, which adds attraction with its affordable living and visiting costs; this, if compared with other European universities in which most of the Chilean students currently attend post- graduate studies.

How does Hungary rate as a posting for Chile’s ambassadors?

Hungary is an A or top destination: very friendly people, safe country, nice standard of living, with special attention to adjust to constant and abrupt changes in the weather, and the Hungarian language. Believe me, it is quite a challenge for a Chilean used to stable and mild weather, from the closeness of the sea. Quite a challenge, the language! I have been studying for months and only managed to read and write. When I speak some phrases, people immediately and happily answer me in Hungarian, but so eagerly fast that I have to come back to English to be understood. But I always felt welcomed and was helped by the Hungarian people.