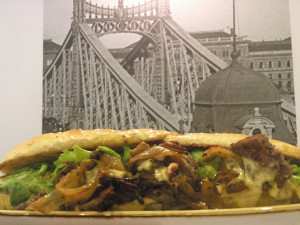 As I sat across the table from Péter Kutas in Bridges Food Bar last week, I gave some thought to the creative energy in Budapest that catalyses people and motivates them to make things happen. A paper wholesaler by profession, Kutas is one of a string of people I have met lately who have chosen to reinvent themselves, to do something different. And the transition from paper to food isn’t an obvious one.

Acouple of years ago, Kutas had the opportunity to purchase a number of flats in a building on Üllői út in the city’s District VIII. The flats, duly converted, now form one of the many apart-hotels/hostels in the neighbourhood. Part of the package included a ground-floor shop, once home to a computer services business that had long since left the building.
A daily visitor to the worksite as the renovation was being done, Kutas noticed that he was hard pressed to find somewhere decent to eat. His needs were simple – tasty, affordable food, served quickly and with a smile. Not much to ask for.
As the idea of opening his own restaurant took hold, the pendulum swung from sandwich bar to food bar and then back to the middle – the entrées are served either with vegetables or in a sandwich. For someone like me, who’d eat just about anything if it was between two slices of bread, this approach verges on genius.
Bridges opened for business in June. The renovations took six months. As it’s on my walk home, I watched the progress with interest. I like my food. I was curious. So I popped in for lunch one day, me and half the neighbourhood it seemed. The place was jammed with office workers all dealing with the constraints of a lunch hour.
If you opt for the daily menu, you order, you pay and you collect – and the process takes just 5-8 minutes at the busiest time. If you choose from the set menu, it’s delivered to your table. I was impressed. My roasted garlic soup was a meal in itself. My chicken and broccoli looked great and tasted even better. My friend’s Philly cheese steak sandwich gave me a brief moment of envy.
Kutas loves his food. He dines out often and knows what he likes and doesn’t like. Chief among his pet peeves is leaving a restaurant smelling of food. He designed Bridges with this in mind. His wife, he says, can never tell if he’s been at the office or in the restaurant.
A gallery of black-and-white tones, the only colour to be found is in the coloured-pencil centrepieces sitting atop paper tablecloths festooned with pictures you can colour in. Doodler heaven.
When I asked about the name, Kutas pointed to the obvious – the bridges of Budapest – but he also explained the idea of bridging the necessity of eating for sustenance with the experience of eating for enjoyment. And he himself has bridged his hobby with a profitable business.
I had a sneak preview of the new menu, which runs the gamut from paella and mackerel to duck leg and ribs. It has hotdogs, hamburgers and sandwiches, salads, pasta, and desserts. The chef, György Doczi, who honed his skills at the Gerlóczy and SonkaArcok, fuses creativity with taste. The staff themselves are part of the overall bridge, each recommended by or somehow connected to another. And it shows.
With the lunchtime trade mastered, Kutas and restaurant manager Attila Veégh, founder of the Mangalica festival, are now concentrating on building up the evening clientele. It’s an ideal venue for small parties with separate rooms that can be reserved. Even after one visit, I can see it being a regular fixture on my culinary calendar. It ticks all the boxes. Open Monday to Saturday from 11.30am to 10pm, you can find it at Üllői út 52b. See you there.

Mary Murphy is a freelance writer and public speaker who is fond of her food. Read more at www.unpackingmybottomdrawer.com