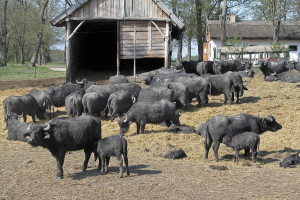 One of the many joys of living in Budapest is the huge amount of activity. There’s always something going on. Places to visit. Exhibitions to see. Concerts to attend. So much so that there is a danger that life in Hungary revolves around the capital and we don’t take or make the time to venture further afield.

The Hungarian countryside is just as active. Quirkiness reigns. The road to the Balaton is well travelled, with the lakeside villages and towns offering plenty by way of distraction. But off the M7 between here and there are other delights just waiting to be discovered, ones that you stumble across when you take a wrong turn or are travelling between one place and the next.
I’d passed the sign for a buffalo reservation on my way to Balatonmagyaród a number of times but only recently took the time to stop and explore. When I think of Hungary, I think of grey cattle and mangalica pigs. I think of birds of prey and wild boar. Buffalo don’t usually come to mind.
And when I think of buffalo, I think of the bison of North America. The wood bison, the largest animal on the continent, can weigh up to 900 kilogrammes. It differs from the plains bison (seen in Alaska) in that its tallest point is in front of its front legs, giving it that distinctive leaning-forward look. It’s woollier, too.
I also think of the African buffalo, with its fabulous curly horns. But the buffalo in Hungary look more like short-legged, hump-backed cows. So much so that when we saw them, we had to look not twice but three or four times to be sure they were buffalo.
These relations of the Asian water buffalo roam the reserve at Kápolnapuszta, part of the Balaton-felvidéki National Park. Not quite as big as their North American counterparts, they can weigh up to 700 kilogrammes and have more angular faces and straighter horns.
The 1.5-kilometre interactive walking trail is very educational, teaching everything about their eating habits and how they breed as well as how they behave in general.
They’re very fond of water and, given the choice between working and playing in the water, there’s no contest. They can amuse themselves for hours wallowing in the mud, so much so that you’d wonder what is going on in their heads.
A small museum has an exhibition of the flora and fauna in the area. It includes the history of the buffalo in Hungary. Picnic tables abound and there are telescopes and a lookout tower from which to view the animals if they’re not co-operating and hanging out close to the trails.
I had no idea that buffalos were once popular domestic animals in this country, raised for their meat, their milk and their might. Many were put to work pulling carts. And while I’m quite fond of a good piece of buffalo mozzarella, I had thought it got its name from its shape rather than from its origins. But yes, it’s made from the milk of the buffalo cow.
Domestic buffalo in Hungary almost disappeared in the 1950s but they were saved from extinction, and today some 300 animals roam freely on the reserve in Zala county. We had the good fortune to see them on the march, one following the other as they made their way across the plain.
The old folk song of the American West came to mind: “Oh, give me a home where the buffalo roam / Where the deer and the antelope play / Where seldom is heard a discouraging word / And the skies are not cloudy all day.” And that just about sums up what I’ve learned of Zala county.
The reserve is open daily in October from 9am to 5pm and from November 1 to March 31 it closes at 4pm. All are welcome.

Mary Murphy is a freelance writer and public speaker who likes to get off the beaten track. Read more at www.unpackingmybottomdrawer.com