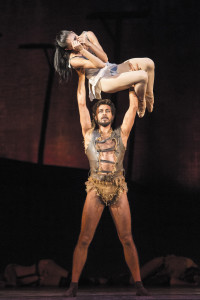 “Spartacus” set out to reach the heights of greatness; everything associated with this ballet suggests soaring ambition, a rich tapestry of Roman history with majestic settings and an epic storyline.

It contains some truly stunning visual effects, an ever-shifting flux of lighting, movement and colour. It is a wondrous sea change of beautiful balletic motion consisting of a sensational variety of spectacular solos, duets and battles, and at times the dancers move as though one living being, completely in synchronisation. Gábor Forray’s awe-inspiring set designs are one of the real highlights of this epic ballet.
Set in the Roman Empire around 74 BC,”Spartacus” was choreographed in 1968 by László Seregi for the Hungarian National Ballet. It is a story that resonates even now with all the fights for freedom and oppression which exist globally, perhaps especially more poignant as we approach the 60th remembrance of the horrors of Hungary 1956.
The ballet contains all the major themes of life; it speaks of torment, passion, love, death, betrayal and freedom. It is stark and brutal from the opening scenes, as the paths lining the Appian Way in Roma are littered with crucified slaves, and among them the title figure of Spartacus.
As the dying Spartacus hangs on his crucifix, his wife Flavia begs Crassus, the suppressor of the slaves, to spare her husband.
Under the blood-red sky Spartacus deliriously experiences visions of the events that led up to his death, as they are played across the stage. Maybe because there is too much of a dreamlike quality about the story, which is viewed in retrospect, it leads to the sensation that something about this ballet just isn’t sparkling.
At times it literally drags. The opening promises so much and the ending is magnificent but its skeleton sags in the middle. It offers the dizzy heights of perfection and yet somehow never quite reaches the mark.
It is difficult to articulate, as “Spartacus” contains everything that should captivate an audience; the composition of the set and the fluidity of the dancers are flawless, the lighting design is dramatic, the costumes beautiful, yet it simply falls short.
The orchestral score was warmly received by a full house on the opening night and will continue to be a huge selling point, but it is flawed; repetitive and seemingly without variation. 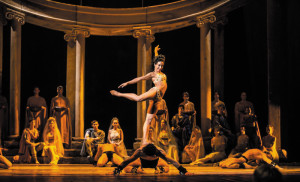 The production has a running time of three hours including two intervals, and yet it seemed more like six hours.
The battle scenes are also endless; here are the slaves in their uprising and yet it goes on for eternity. There will always be lovers and loathers of any production, but for me it just didn’t hit it.
As it moves full circle there is a feeling of being witness to something truly awe-inspiring yet empty, as though it stretched itself too far to reach the sublime and fell flat on its way up.
And we end where we began, with Spartacus on his crucifix, Flavia mourning beneath him everything that could have been: the struggle of life and death. Freedom is just a distant glimmer and as the light and Spartacus are both dying, so too does hope.