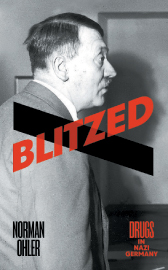 Adolf Hitler was almost constantly accompanied by his personal physician, who kept the Fuhrer topped up with regular injections of steroids and opioids, as well as a stream of untested new drugs that the doctor devised specifically for him.

Dr. Theodor Morrell’s notes about “Patient A” are kept in federal archives in Germany and national archives in the US, and Ohler has sourced much of his material directly from them. Between 1936 and 1941, Hitler favoured high intravenous doses of vitamins and glucose.
By 1941, when many labeled him as insane for invading Russia, he had turned to steroids and hormone products such as liver extracts of pigs. All the organs from every animal slaughtered in the occupied Ukraine would be sent to Morell’s factory, where he would concoct hormonal doping agents to inject into Hitler.
Mild doses of cocaine were a common remedy for the time, including being an original ingredient of Coca-Cola. But Morell administered unusually potent cocaine-laced eyedrops to Hitler from 1944. After some months of this, Hitler threw Germany’s dwindling forces into a completely irrational drive against US troops in the Ardennes.
Hitler rejected all talk of retreat or surrender. He had undying faith in questionable secret weapons to win the war, and deluded himself about a victorious post-war Reich, with legalised polygamy to repopulate as quickly as possible.
Ohler writes that the German leader was in a drug-induced sleep as troops landed on D-Day. Tanks that could be dispatched only on his direct orders were critically prevented from mounting an immediate counter-offensive. As the Allied invasion gained ground, a euphoric Hitler maintained for days that it was only a feint.
As Soviet troops constricted around Hitler’s Berlin bunker, the addicted dictator allowed Morell to send out men on motorcycles to cruise the battered city and raid pharmacies.
By Ohler’s account, by the end of the war Nazi Germany was at the beck and call of a junkie. Hitler wasn’t the only one: while the Nazis presented themselves as warriors against moral degeneracy, and Hitler as a clean-cut abstainer, the entire Third Reich was riddled with drugs including cocaine, heroin and morphine, used by everyone from factory workers to housewives.
Pervitin, a popular over-the-counter drug in Nazi Germany, was a close cousin of modern-day crystal meth and was called an “alertness aid”. Methamphetamines originated in Germany in the late 1800s, and the Pervitin brand first hit the market as a “wakefulness pill”.
German generals used it to keep their soldiers awake for the 72 hours needed to strike a mortal blow against French defences in May 1940. Ohler estimates that up to 35 million dosages were given out to soldiers who popped several at a time just before the attack.
Aside from handing out Pervitin, military doctors dosed chocolate with methamphetamine too, giving Fliegerschokolade or “flyer’s chocolate” to pilots. The speed sweet was given to tank crews and dubbed Panzerschokolade or “tanker’s chocolate”.