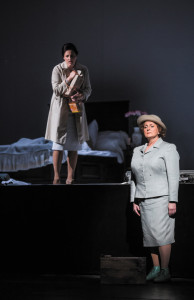 The Mine and Love are two one-act operas paired together and which opened as part of the 60th anniversary of the 1956 Uprising, the first by a Finnish composer and the other by Hungarian composer Judit Varga.

The Mine is tense, claustrophobic, the sharp shapes rising from the orchestra pit cutting and discordant, but herein lies its dramatic power. It is not easy listening or viewing but it is not supposed to be.
The community who are trapped underground by a mine collapse are rising up against a dictatorship; the opera is influenced by the events of 1956. The full extent of their pain and claustrophobia is expressed in the darkness of the lyrics, the sparse set with its minimal yet so effective lighting and the chorus of voices that at times seems to screech out in pain.
Conductor Tibor Barányi said of composer Rautavaara that there are influences of Stravinsky and Bartók in the orchestral score, and the sharp aggressive notes certainly do reflect this.
Finnish, a Finno-Ugric language in the same family as Hungarian and Estonian, fits well in this opera. Here it speaks of darkness and fear, strength and solidarity against the horrors that lie just above the surface of the mine.
Underground is safe but the air will run out. Above the ground they will meet certain death.
There were magnificent performances from Péter Fried, Adrienn Miksch, Attila B. Kiss and Tommi Hakala.
The second one-act opera, Love by contemporary composer Judit Varga, was less engaging.
Varga takes inspiration from the movie Love by Tibor Déry, Károly Makk and Peter Bacsó. It is told from the perspective of women and based again on events around 1956, although it is essentially a modern opera, in design and approach.
The ideas were there, the finale with the composition of performers on stage was dramatic and effective. Performances were strong, especially Gabriella Fodor as Luca who was extremely powerful and expressive in her acting, but in places the action seemed to meander, as if somewhere it lost its plot.
The barren unchanging cube of the set did not help: a pity, as Love promised so much.
Looking across at the empty seats of the stalls in the Opera House and the spaces in the circle boxes, there is evidence of a worrying trend at work.
At the recent première of The Spinning Room the top price bracket was HUF 25,000, or EUR 80. The seats were so undersold that customers were moved from the gallery to the stalls to fill the house. There were 10 shows of The Spinning Room and despite it being Kodály the Hungarians were just not buying it. Literally.
For the première of The Mine and Love the top-price seats were HUF 18,000, or EUR 58. Half the stalls were empty.
The second rows of the dress circle and upper circle boxes are typically around HUF 11,000, or EUR 35; not so pricey until you consider that many of these due to the horseshoe shape of the auditorium are not actually so-called “restricted view” seats but “no view” seats (you have to stand to see the stage, which is obscured by the closed boxes).
For opera to progress, or theatre in general, experimental and new productions are vital; they challenge and inject fresh life into what is essentially a traditional art seen by many as elitist. But what a theatre should be concerned with is the burning question faced by opera houses across the globe: does it fill the house?
And in Hungary we are faced with another question: have price rises put productions out of reach of many Hungarians?
True, there is the Erkel Theatre, which sells tickets around HUF 3000 in the top price range, but La Traviata managed to fill the Opera House over a long run despite the prices being on the same level as The Spinning Room, The Mine and Love.
Opera goers in general are traditionalists at heart. They want Verdi, Puccini and Wagner. Yes, it is a problem as art is not progressing but to charge EUR 80 equivalent in Hungary is unreasonable.
The king of opera houses, La Scala in Milan, admittedly charges EUR 250 for top price stalls seats but there exists more of a range of prices. It is possible to pay EUR 30 and still have a reasonable seat. It is also the West and the most expensive city in Italy.
All this is not to denigrate the huge achievements of operas such as The Spinning Room, The Mine and Love, especially those performers and everyone involved in each performance who clearly gave 100 percent.
There are those opera goers who do appreciate straying from the mainstream and will attend cutting-edge productions, but given the choice between the known and the unknown at EUR 80 a ticket and your salary allows just one, what would you choose?