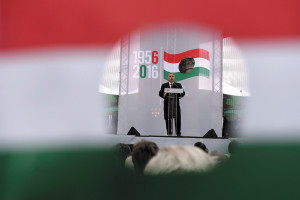 As usual, the anniversary of the 1956 Uprising saw practically all political parties hold commemorative rallies in the capital on Sunday. Prime Minister Viktor Orbán spoke outside Parliament with a few hundred anti-government protesters blowing whistles in the background, Jobbik head Gábor Vona was at Corvin Cinema, and MSZP and the Democratic Coalition held a joint event in Blaha Lujza tér.

October 23 is a day on which Hungarians should be proud, Prime Minister Viktor Orbán said at the state commemoration of the anti-Soviet Uprising. Even after 60 years it remains a day that “lifts up and cleanses us”, he said, calling the national holiday a “shared heritage” of the Hungarian people.
Orbán said Hungarians can be thankful to the heroes of 1956 that there is much to be proud of even in “the darkest years of Hungary’s history”. 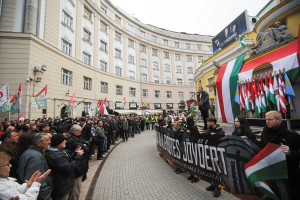 At the beginning of his speech, he greeted Polish President Andrzej Duda, the guest of honour at this year’s celebrations. Orbán described Hungarian-Polish relations as a 1000-year-old friendship of two “courageous” nations.
Hungarians will always fight for freedom and will achieve it “even in the most hopeless of situations”, the prime minister insisted. “We, Hungarians, have a talent for freedom. We have always known how to use it.” He warned that freedom is “not a final state but a way of existence; just like swimming: you stop doing it and you will sink”. The question is always this simple: whether we decide on our own fate or other people, he added.
Concerning the European Union, Orbán said “freedom-loving peoples of Europe must save Brussels from Sovietisation”. He argued that the EU must not be turned into a “modern-age empire”; the community must not be replaced by a “United States of Europe”.
“We, Hungarians, want to remain a European nation, rather than become an ethnic minority in Europe. It is only our national independence that can save us from being devoured by an empire.” He argued that it was this very “national idea” that had saved Hungary from being integrated into the Soviet Union.
As descendants of 1956, Hungarians “cannot let Europe cut the roots that had once made it great and also helped us survive communist oppression”. Europe could not be “free, strong and respectable without the revitalising power of nations and 2000 years of Christian wisdom”.
Orbán said history puts Hungary in the mainstream of disputes on the future of Europe every 30 years. He argued that in 1956 Hungary attempted to “shift the Iron Curtain east of our borders”, then in 1989 the country opened its western borders “so that Germans could find a way to Germans”, while recently Hungary “had to close its borders to stop the influx of migrants from the south”. 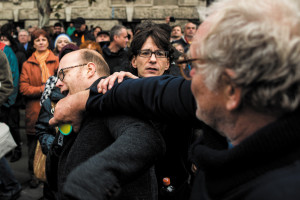 Hungary would not falter “even if those whom we are trying to protect attack us from behind”; we have “the courage to face injustice… and Europe can always rely on us. We cannot allow terrorists, profit hunters that dispatch hundreds of thousands in the hopes of a better life to Europe, or the naive who have no idea what fatal jeopardy they will toss Europe and themselves into to gain ground.”
Orbán said Hungary chose “the hard way” when it “preferred children of its own to immigrants, work to speculation, earning a living to becoming a slave of indebtedness, and protecting borders to surrendering”.
Concluding his speech, he urged a “spiritual awakening” and argued that despite “political power, parliamentary majority or a new constitution”, victory was not possible without “elevating the hearts” of the people. “For major things we need unity, for other things we need freedom, and love for all things,” he said.

A few hundred anti-government demonstrators gathered near Kossuth tér outside Parliament to try to disturb the state celebrations by using referee whistles, horns and rattlers to express their disapproval of the government.  The protesters mainly consisted of supporters of the opposition Együtt party and members of the Civil Opposition Roundtable and the Democratic Resistance civil groups.
They got louder when Orbán went on stage to deliver his speech, and several scuffles broke out between demonstrators and those who were there for the celebrations.

‘No bargaining’ over freedom 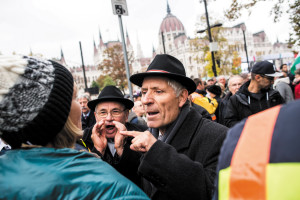 The country’s independence and the freedom of its people are “not for sale”, Gábor Vona, head of the radical nationalist Jobbik party, said at a commemoration of the 1956 anti-Soviet Uprising at Budapest’s Corvin Cinema, a shrine of the revolution.
In his address, Vona paid tribute to the revolutionaries and urged that the list of communist-era informers should be made public. He urged that perpetrators of violent acts during anti-government demonstrations on the same day in 2006 should be punished.
Vona said all his party’s deputies had signed a declaration that they would not support the government’s constitutional amendment bill unless the residency bond scheme is dropped.

Leftist opposition parties urged cross-party co-operation to oust the government and achieve a “new change of regime” at a demonstration.
Referring to the ruling parties, Socialist Party leader Gyula Molnár said those claiming to be the heirs of the 1956 revolutionaries “desecrate” the ideals of the revolution. “They are not the heirs of [1956 prime minister] Imre Nagy but more like those of [former communist dictator] Mátyás Rákosi,” Molnár said.
He said the words of martyred Nagy, that a dictatorship must be destroyed and not reformed, still ring true today. Molnar said his party had “never thought a time would come” when the demands of 1956 “would once again sound exactly as they did 60 years ago”. These demands included bringing an end to oppression, the establishment of a free media and a call for Russia not to “interfere” in Hungarian politics.
Molnár said it was possible to oust the Orbán government, adding that such a feat would “simply” require winning a majority in 106 constituencies and among the votes cast for national party lists.
Democratic Coalition leader Ferenc Gyurcsány said it was not simply the governance of the ruling parties that was “bad” in Hungary today but rather the “system” altogether, and he voiced agreement with those calling for a new change of regime.
He said that although the leftist parties deserved criticism for their failed joint election campaign of 2014, without them joining forces at the time the situation in Hungary would be “even worse” today. The leftist opposition must now draw the necessary conclusions from that campaign and enter into talks with opposition players who, although they may not have many supporters, are honest and “want the same thing” as the bigger parties.
“There is no middle ground,” Gyurcsány insisted. “Those who are not against Orbán are with him. I am against Orbán and we will defeat him and create a new Hungary.”
Gergely Karácsony, co-leader of the Dialogue Party, also called for a change of regime and said that a new republic should be established. But to achieve this, the opposition parties would have to reach a compromise on how to work together. The parties would start talks as early as next week on a potential co-operation in the 2018 general election.
Karácsony said October 23 should be a day of celebrating the heroes of 1956 but the opposition had to “come out and protest”, because the freedom that the Hungarian heroes had risked their lives for 60 years ago was “waning” once again.
He said the republic was “dead”. The country’s leaders only cared about using their power to get rich and their money to amass “even more power”. He described the prime minister as “the first tyrant” in the history of Hungary to be kept in power not by the soldiers of a foreign power but by the apathy of his own people.
Referring to the revolution’s 50th anniversary in 2006, whose commemorations had been held amid violent anti-government protests and police actions, Karácsony said similar incidents, namely that “half the country feels that the police can’t tell the difference between the street mobs and citizens exercising their right of assembly”, could not happen in the future “new” Hungarian republic. He said he was “sorry” for the events of 2006.
Lajos Bokros, head of the conservative MoMa party, said that once a “democratic power” is elected, they should “request a 500-day mandate” to “restore the constitutional rule of law” and democracy.

The people of Hungary have now had “enough of the government’s curbing freedom, restricting the press, intimidating civil groups and anti-EU policies”, Gábor Fodor, head of the Liberal Party, said.
Speaking at a commemoration marking the anniversary of the 1956 revolution in Budapest’s Rákoskeresztúr public cemetery, Fodor said many people had thought the communist regime to be solid and unshakeable, and “many see no hope today and think that the illiberal state cannot be changed”.
“But I believe in freedom and our history shows that those regimes could collapse overnight,” he said.” That will happen to the current one.” Though the events of 1956 are getting further and further away in time, the quest for freedom, which led people to protest against communist rule at that time, “now feels more familiar each day”. 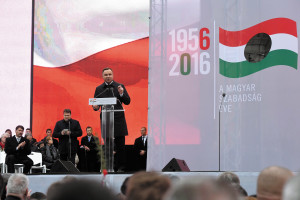 Poland is proud and grateful

Hungarians “have always been friends” and they can always rely on Poland, “even in difficult moments of the future”, Polish President Andrzej Duda said in his address in front of Parliament. Referring to the Poznan uprising, which preceded developments in Budapest, Duda said Polish revolutionaries wanted the same things as Hungarians: “a decent living and freedom, all that communism had taken away”. Hungarians, however, had gone even further: they demanded the withdrawal of Soviet troops, independence for the country, self-determination and a multi-party system. Poland is “proud and grateful” that it was able to provide aid to the Hungarian revolution, Duda said, and noted that his people had sent 44 tonnes of medicine and medical equipment as well as 800 litres of blood to Hungary shortly after the Uprising broke out. “Poles are proud that the grandchildren of 1956 heroes have, symbolically, Polish blood in their veins,” the president said.