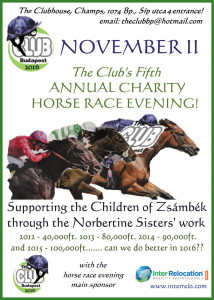 I grew up in Kildare, an Irish county known for its thoroughbreds. With its stud farms and racecourses, it’s a mecca for anyone interested in National Hunt or flat racing. The local schools close for the three-day Punchestown Festival. Ladies Day at the Derby in the Curragh is up there as one of the fashion highlights of the year. And while racing here in Budapest in Kincsem Park isn’t quite of the same calibre, it’s still a great day out. Unless it’s heading in to winter and too cold to hold a pen to mark your race card. Which is why race nights were invented.

For those not familiar with the format, it goes like this. You get a bunch of people together in a pub. You show videos of eight real horse races, with the names changed, of course. People bet on them, as if they were at a real racecourse. Races are sponsored, just as they are in real life. There’s a bookie to take your money and pay out your winnings. There’s a bartender to take your drinks order. But best of all, the proceeds go to charity.
So, who goes to all this bother, eh? The Club.
Back in the day, the British Embassy ran the Britannia Club, a regular meeting place for expats in Budapest. Since its demise, The Club has dedicated itself to continuing the camaraderie and ambiance it fostered amongst visitors and locals in Budapest. This private members’ club is also open to guests and friends, and meets from 18:30 each Friday in The Clubhouse, at the rear of Champs Sport Pub, Dohany utca 20. (You can also enter from Sip utca 4, direct into The Clubroom – but just on Fridays.)
The Clubhouse is a home from home for travelling souls and kindred spirits from all over the world who enjoy meeting new people, catching up with old friends and generally having a good time. Special monthly events vary in theme and regular charity events get members and guests involved in the community, having fun while doing good. The annual race night is just one example.
This year will mark the fifth annual Charity Horse Race Night, which has gone from strength to strength, raising HUF 40,000 in 2012 and HUF 100,000 last year. This year’s focus is to raise money to help support the Children of Zsámbék through the work of the Norbertine Sisters, who provide a daily routine, food, schooling and vocational training in usable skills such as carpentry, tailoring, IT, metal-working, and restaurant and hospitality, for disadvantaged kids in the area.
I’ve been in town for a couple of them and once dragged along some visiting Irish friends – under duress, I might add. They hadn’t come the whole way to Budapest to spend the night in a British pub at a race night! But it’s infectious. Perhaps it’s the betting blood that courses through us, but it was amazing how excited we got about winning HUF 500. Madness.
My mother always told me that a bookie’s money is only ever on loan; what you win today, you’ll lose tomorrow. But with this event, no matter what you lose, the Children of Zsámbék will come out winning.
The first race will be under starters orders after the event introduction at around 19.30; the Clubhouse will open as usual around 18.30.Chili con carne will be served between races 4 and 5 to help bolster the inner gambler and calm the nerves ahead of the final four races. Suggested donation at the door is HUF 2000 for guests and HUF 1500 for members. Every little helps.
If you’re in town this Friday night in want of something to do, go along. Have some fun. It’s all in a good cause.

Mary Murphy is a freelance writer and public speaker who likes a flutter. Read more at www.unpackingmybottomdrawer.com