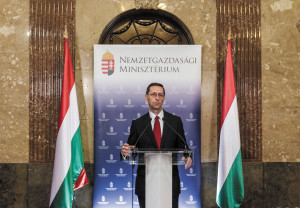 All three big ratings
agencies having Hungary in investment grade could open a new chapter in
efforts to reduce the country’s public debt, Varga says

Moody’s Investors Service has upgraded Hungary’s long-term issuer and senior unsecured government bond ratings by one notch to Baa3 from Ba1 with a stable outlook, putting the country back in investment grade. It was the third bump in six months after Fitch restored Hungary to investment grade in May and Standard and Poor’s followed suit in September.

Explaining the rationale for the improved rating, Moody’s said the country’s debt burden will continue to gradually decline and structural improvements will support positive growth rates, while external vulnerability has been significantly reduced.
Moody’s noted that the government had demonstrated its commitment to reducing its debt burden, and the expectation that the trend will be sustained by running primary surpluses in each of the next four years. It added that the proportion of government debt denominated in foreign currency as well as the share held by non-resident investors had been reduced, increasing resilience.

Moody’s acknowledged government policy measures that produced a consistent improvement in investment and consumption trends, which, paired with economy-wide deleveraging and an improvement in cost competitiveness, will support economic performance in the coming years.
The ratings agency projected annual growth of around 2-2.5pc. The forecast could be exceeded if government measures boost absorption of EU funding and increase home construction, Moody’s said, but added that Hungary’s limited capacity to attract new foreign direct investment “remains a challenge”.
Moody’s pointed to the country’s persistent current account surpluses over the past few years as a reflection of a “robust and sustained improvement in the trade balance and gains in export diversification”. It expects external vulnerability to continue to decline as current account surpluses reduce the country’s large negative net international investment position.
The stable outlook on the rating reflected “balanced risks … We expect the greater predictability in policy making seen in the last couple of years will be sustained, resulting in a more stable, growth-friendly policy environment in Hungary than in the past”.
A continued improvement in Hungary’s economic and fiscal metrics as well as structural reforms that stimulate private investments through improvements in non-cost competitiveness could lift the country’s rating, the report said.
Downward pressure on the rating could arise from a weakened commitment of policymakers to contain the budget deficit or continue to reduce debt, as well as the introduction of any policy measures that would negatively impact the economic growth outlook.

The Ministry of National Economy said all three big ratings agencies now “acknowledge the success of Hungarian economic policy, after international organisations and market investors have already done so. Thanks to a successful economic policy, all of our country’s macroeconomic indicators have improved in the past years and the level of state debt has shown a recognisable declining trend, which could not be ignored by ratings agencies”.
Minister of National Economy Mihály Varga said the upgrade means that all three big ratings agencies have Hungary in investment grade and this could open a new chapter in efforts to reduce the country’s public debt.
“Hungary can now start considering a more ambitious path in its debt reduction,” he said, noting that the costs of debt financing are set to drop by as much as HUF 10 billion a year.
According to Varga, the impact of the upgrade should be neither over-estimated nor the opposite. “Expecting a sudden change in the perception of the economy, for instance, would be over-estimating its impact,” he said.
“Market investors had turned positive about Hungary’s economy before the ratings agencies, having marked Hungary’s risk premium at the same level as investment-grade Poland. But it would also be wrong to underestimate the upgrade because many investors still view the opinions of ratings agencies as key benchmarks. The upgrade was a mere bonus in this respect.”
The minister noted that the debt-to-GDP ratio would maintain its downward trajectory this year. The foreign currency debt ratio is also decreasing, and the government expects it to fall to below 30 percent this year, a “milestone” given that six years ago the proportion of public debt denominated in foreign currency was 50 percent, he added.
Varga welcomed Moody’s upside growth assessment of the government’s home creation programme, noting that the agency forecast an annual growth rate of 2.0-2.5 percent.
Asked if the government was planning to issue foreign currency bonds, Varga said there are no such plans for the foreseeable future, as such a move would be in conflict with the aim of increasing the proportion of forint-denominated debt.

Head of the Fiscal Council Árpád Kovács said Moody’s decision will expand room for financial manoeuvre and bring new capital to Hungary. “Financing will be cheaper, the country’s international reputation will improve and the credit agencies’ decisions will have a positive impact on Hungary’s image and help attract new investment.”
Kovács said markets and investors have considered Hungary for quite some time as recommended for investment, and based on the objective figures the country’s credit rating could have been upgraded three years ago.

Budapest Stock Exchange’s main BUX index was up 1.12pc at 30,353.45 points on Monday, a historic high surpassing the previous record of 30,132 on July 24, 2007. The BUX was above the break-even mark during the entire day. Share prices rose as Moody’s Investors Service upgraded Hungary’s long-term issuer and senior unsecured government bond ratings, and due to the positive investor sentiment on Western European markets.