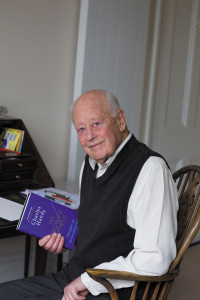 Back in 2008 at a conference in Budapest I discovered Thinkers50, a biannual global ranking of management thinkers billed as “the essential guide to which thinkers and which ideas matter now”. When the list launched in 2001 Charles Handy held the No. 2 spot. He was in Budapest to mark the publication of two of his books in Hungarian. I had the pleasure of introducing one of them – “The Empty Raincoat” (“Üres esőkabát”) – at the launch. We discovered, in conversation, that he was born less than a mile from me at home, in the vicarage on the other side of the crossroads. How small the world.

Even though that was eight years and what seems like a couple of lifetimes ago, I still remember the ease with which Handy interwove management practices and philosophical theory. He’s a born storyteller, blessed with the innate ability to distil complex thinking into simple speak without losing any of the message’s inherent power.
By introducing me to the concept of a portfolio career, he gave me the gift of a ready explanation for what I do, something that had been heretofore impossible to explain to those who wanted a phrasal answer to the question: So, Mary, what do you do for a living?
Handy was back in Budapest again last week, this time to launch the Hungarian translation of “The Second Curve” (“A második görbe”). He began his introduction with a story.
In Ireland, driving through the Dublin mountains on his way to Avoca in County Wicklow, he got lost. He stopped to ask a farmer for directions. The man pointed down the valley and up over the top of the next hill, telling him that when he reached the top and looked down, he’d see a red building in the distance – Davy’s Bar.
But one kilometre before that, he was to turn right for Avoca. He got to the top of the hill and saw the bar in the distance. On he drove. But there was no right turn. Then he realised what the man had meant: he was to take a right turn one kilometre before he got to the top of the hill. The idea of the second curve was born.
As we set out in life, we have what Handy calls an education, investment and preparation stage, the drive down into the valley. As we come up the other side, our lives progress, our careers blossom, we start making money. When we get to the top of our game, we inevitably start on the downward slope to Davy’s bar, home of the “if onlys”.
What we need to do is to take the turn before we get to the top of the hill. We need to start setting up that second phase before the first one reaches its peak, so that when one curve starts the descent, the second curve begins its ascent. That one kilometre represents about two years.
Each of us, he says, has three primary roles in life – to make money to live, to fulfil our duty to others and to follow our passion. Once we have identified our passion, we can start setting up that second curve. And the third curve. And the fourth, depending on how long we live.
But too many of us miss the turn, so busy are we making money and doing our thing. Inside each of us, he believes, is a golden seed, a skill or talent that others might recognise before we do. The trick is to listen for it, to pay attention to it, to nurture it and set up that second curve, so that we’re don’t end up in Davy’s bar wallowing in “if onlys”.
And the second curve applies not only to individuals but to organisations and governments, too. World leaders, take note.

Mary Murphy is a freelance writer and public speaker embracing the curves. Read more at www.unpackingmybottomdrawer.com