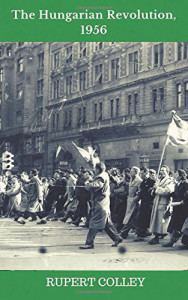 The sixtieth anniversary of the Hungarian Revolution has just been and gone. Here, in the UK, the occasion passed almost without notice. Anyone who blinked would have missed it. Yet the story of one nation’s fight for freedom still has its echoes today. It is a story that is as heroic as it is tragic.

From 1944, during the Second World War, Hungary was little more than a vassal to Hitler’s Germany, ruled by the fascist and fearsome Arrow Cross. Hungary’s Jewish population was decimated by Hitler’s genocide. Then, in April 1945, Hungary was liberated by Stalin’s Red Army.
Post-war, the nation was relieved but not to the point as to want a communist government in charge. Indeed, Mátyás Rákosi’s Hungarian communist party suffered a drubbing in Hungary’s first post-war national elections in 1947, receiving as little as 17 per cent of the vote.
But under Stalin’s guidance Rákosi intimidated his opponents, cutting them up like slices of salami, as he later boasted, and by 1949 had manoeuvred his party into power.
Rákosi was a Stalinist tyrant and Hungarians felt the full force of totalitarian rule – the total lack of freedom and expression, and the constant presence of the much-feared secret police, the AVH.
Stalin died in March 1953 and within four months his successor as first secretary, Nikita Khrushchev, had sacked Rákosi. For a short while Imre Nagy ruled Hungary.
Although a dedicated communist, Nagy, a more compassionate man, genuinely sought to improve people’s lives. Nagy was popular – too popular. Khrushchev stepped in again and, sacking Nagy, replaced him with another Stalinist – Ernő Gerő.
In late October 1956 a group of daring students in Budapest printed a manifesto in which they demanded basic civil liberties. Within a matter of hours the whole capital had risen against Hungary’s communist rulers and their Soviet masters. Within a day or two the entire nation was in revolt.
My book, “The Hungarian Revolution, 1956”, traces the background to the Uprising. I start at the end of the First World War, summarise the Horthy years, the Second World War and the post-war years leading up to 1956.
I describe, day by day, the trajectory of events during the Uprising and its eventual failure.
My book finishes with a quick look at Hungary post-1956, and how Hungary as a communist nation survived the Uprising. There’s also a chapter on a game of water polo.
The sport was huge in Hungary and during the Melbourne Olympics in December 1956 the Hungarian team reached the semi-final only to have to face the Soviet Union. The resulting match was one of the most politically and emotionally-charged spectacles of team sport ever witnessed.
My interest in the Hungarian Revolution extends also to fiction. In 2013 I wrote a novel called “The Torn Flag”. Set during the years of 1949 to 1956, the novel follows the lives of a secret policeman, a footballer (Hungary were arguably the best footballing nation in the world during the mid-1950s), a teacher and a Soviet soldier.
Writing about the policeman was the most interesting part for me, as the author. It’s always fascinating to put yourself in the shoes of the “bad guy”, of someone who actually believed in Hungary’s communist government and what it was trying to achieve, and believed his work in the AVH was a source for good.
It is important that we never forget the lessons of history. Sixty years on, the Hungarian Revolution of 1956 remains one such lesson.