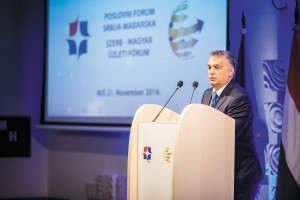 Central Europe and the Visegrád Group will be “great success stories in the years ahead because there are great economic opportunities here”, Orbán said, adding that Serbia can partake in their economic successes.
Hungary-Serbia political relations have never been as good as they are now, and Serbia has notched up successes in financial consolidation in the past two to three years, he said. Serbia’s finances were in order, the economy was stable and there were opportunities for growth.
Orbán said that starting off from a low point in 2010, Hungary has by now accumulated the economic tools with which to bring economic growth close to 5 percent. “You’d be hard-pressed to find a period going back when relations were as well-balanced, strong and friendly as they are now,” he said.
“This is thanks to the hard work of many people, including the Serbian prime minister and his government.”
Serbia had always been seen as an opportunity from Hungary’s perspective, and he encouraged Hungarian businesspeople to “put Serbia back on the map”, not only in Vojvodina and Belgrade but in the country as a whole.
Orbán said Hungary supports Serbia’s aspiration to join the European Union, and it is employing economic development tools to advance co-operation, including a 61 million euro fund and credit line available to companies involved in co-operation. Once this credit line was used up, the resources could be significantly upped.
He told Serbian businesspeople that Serbian capital is welcome in Hungary because it would boost long-term and well-balanced bilateral relations. There was currently no flagship project until construction started on the Budapest-Belgrade railway link.
Serbian Prime Minister Aleksandar Vucic said Serbia planned to close the gap with Hungary and similar countries. He said attracting investment was among Serbia’s most important targets, adding that cheap skilled labour was one of the country’s biggest draws.
Vucic encouraged Serbian businesses to enter the Hungarian market, stating that this would strengthen bilateral relations and trust between the two countries.