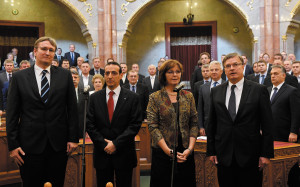 During her committee hearing Marosi Horcher, a former supreme court judge, said the two courts should engage in more intensive dialogue and “conflict in the air” should be defused, which is why better communication would be helpful.
She said the Constitutional Court should not “teach” judges of the general courts about the law, which “they already know”. Rather, they should be given constitutional guidelines but then “allowed to deliberate and rule in the cases assigned to them”.
Schanda (pictured second from left) called for “commonsense” and a human approach to the highest levels of legal practice. Concepts such as environmental protection, the family and language are the unwritten precursors to a democratic state, he said.
Szabó (pictured left), the green ombudsman, argued for the widest possible transparency on projects related to nuclear energy, and noted that the Constitutional Court plays a vital role in setting clear definitions concerning a country’s international legal obligations.
Horváth (pictured right), who is author of a new national declaration to be added to the preamble of Hungary’s basic law, said it is important to apply the timeless, rational principles of Hungary’s “historical constitution”, which are still valid today.
Out of Parliament’s 199 MPs, 138 participated in Tuesday’s secret ballot, supporting the candidates with an overwhelming majority. The opposition Socialists and radical nationalist Jobbik boycotted the vote because they objected to the nomination process.
Jobbik deputy group leader Gábor Staudt said the party found the candidates suitable but Jobbik had been “excluded” from the nomination. The party had first been informed about the upcoming vote last Thursday, and the short notice was “not fair”.
Green LMP also supported the candidates. Co-leader Ákos Hadházy said the four “could add to those who make their decisions independently of the government’s position”. LMP described its intention to vote with the governing parties for the candidates as “damage control”.
The party said the current top court has seven members whose independence is questionable, and the court so far had been reluctant to take on matters that would displease the government. 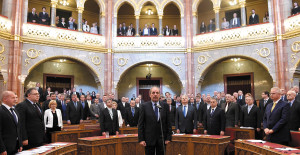 Fidesz group leader Lajos Kósa said the election had been “lawful and legitimate”. Referring to the Socialist Party’s criticism, Kósa said “the Socialists seek to destabilise the country and destroy democratic institutions”.
He noted that the Socialists “would not” name any candidate they could support, and they, Jobbik and the leftist Democratic Coalition are becoming “a group seeking to thwart any initiative”.
The co-ruling Christian Democrats hailed the election, welcoming LMP’s contribution to the nomination process but regretting that the other opposition parties had “failed to put aside selfish interests”, thus “jeopardising the operation of an important institution of the rule of law”.
László Varju, deputy leader of the Democratic Coalition, said the outcome of the vote would further increase the government’s powers, and he criticised LMP for its collaboration. “LMP has quit the opposition”, Varju said, symbolically offering Fidesz memberships to LMP co-leaders Bernadett Szél and Hadházy, who attended his press conference.