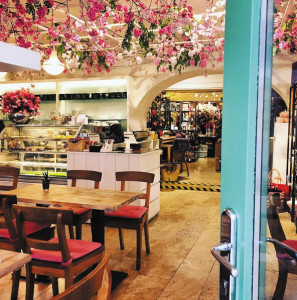 Walking through the city in late October, I spotted my first Christmas tree. I tried to block it out, to pretend it wasn’t there. But the minute November arrived, there were too many to ignore. Even the city’s Christmas Markets seem to be ahead of schedule this year – didn’t they usually
open the first weekend of Advent or am I losing my mind completely? Whatever happened to saving Christmas until December? Why are we in such a rush to make it all happen?

It’s getting increasingly difficult to field the effects of global consumerism. While Americans might save Christmas until they’ve dealt with Thanksgiving, their retail habits have made it across the pond. This year we had Black Friday and Cyber Monday – two traditional mammoth shopping days that I’ve always associated with America.
Perhaps I missed something but it seems that this is the first year I’ve seen such sales in Hungary. I could be mistaken though. Anyway, I shouldn’t be as upset as I am at the tide of consumerism that is sweeping my corner of the world. But it saddens me.
And if fast-forwarding the Christmas spend and adopting US retail sale practices weren’t bad enough, we’re also drowning in a sea of cheap oriental tat. Try finding a decoration or a piece of garland that hasn’t been made in China – there’s a challenge. Consumerism has married sameness and the couple are thriving.
In search for something a little different this Christmas, I revisited Arioso at Király utca 9. What began as a flower shop back in 2002 has expanded to include a café and a gift and home décor range that embodies good taste.
Swiss couple Katja Schläfli and Martin Aeschlimann came to Budapest back in 2000 to visit some friends. They noticed the plethora of florists in the city and rightly understood how much Hungarians love their flowers. Back then, Swiss knowledge of the region stopped short at Vienna so Budapest wasn’t on anyone’s radar.
They liked what they saw and decided to open a Swiss-style florist on Király utca. They chucked in their jobs and moved east, knowing just four people and nothing of the language or what was in store.
Even with both having a background in the business, it took time to find the right suppliers, to build up relationships with them, to develop a client list and to gain people’s trust. They quietly went about the business of producing floral works of art and slowly word-of-mouth endorsements began to pay off.
Today, with more than 25 trained staff on board, they’re responsible for the floral creations in places such as the Four Seasons and the Kempinksi, where they’ve just opened a small gift shop.
When they opened on Király in 2002, the majority of their clients were foreigners. Today, 80 per cent are Hungarian, testament indeed to how much of an inroad they’ve made in the market. Their workshops are in demand and their interior design advice much sought-after.
Back in 2011, they opened a café (and in summer, a lovely courtyard), giving people extra time to enjoy the atmosphere that is exclusively Arioso. They serve their coffee accompanied by a flower. A lovely touch, an attention to detail that you quickly come to expect from the pair whose philosophy is very much entwined with beauty and quality.
They don’t simply sell flowers and home accessories from Holland, Sweden, Iceland and Germany – they sell feelings. And if I had to choose one word to describe their offer, it would be elegant.
A second shop followed in MOM Park to cater for clients on the Buda side and, with a web shop offering the convenience of online shopping, Arioso definitely caters to consumer needs while eschewing the sameness too often found elsewhere. Their Christmas range is just in and worth checking out. www.arioso.hu

Mary Murphy is a freelance writer and public speaker who likes classic line and clean living. Read more at www.unpackingmybottomdrawer.com