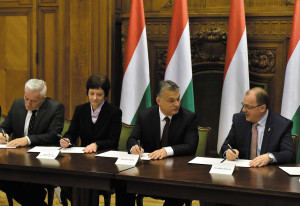 The signing
of the wage agreement

Minimum wages for unskilled workers will be raised by 15 percent and for skilled workers by 25 percent in 2017, according to an agreement the government reached in talks with social partners. In 2018 the minimum wage will be increased by a further 8 and 12 percent, respectively. In 2017 payroll taxes will be cut by 5 percent and by a further 2 percentage points the following year.

Speaking after the meeting, Economy Minister Mihály Varga noted that the government had also committed to cutting the corporate tax rate to 9 percent next year.  The corporate tax rate now stands at 10 percent on a tax base up to 500 million forints and 19 percent above that.
Varga said the government’s measures to improve competitiveness and raise wages provided a foundation to achieve stronger economic growth over the 2-3 percent rate at present. He said all three sides went to maximum lengths in the wage talks to make sure that an agreement was reached, adding that the wage deal was the first important document of a “new time period” in which he said everyone would work to ensure that Hungary “finds its place”.
The minister acknowledged that the measures would require a recalculation of inflation forecasts, but said those, as well as other macroeconomic parameters that need adjusting, would not be changed in next year’s budget. The government can amend the projections next March, if necessary, he added.
The National Bank of Hungary said in its latest quarterly Inflation Report, released in September, that inflationary pressure from rising household consumption resulting from higher wage growth would “remain moderate”, according to the baseline project. However, the NBH also considered an alternative scenario in which pay rises are higher and add to household spending.
In this scenario, achieving the 3 percent medium-term inflation target would be “ensured by a monetary policy that is tighter than projected in the baseline scenario”, the central bank said.
Hungary’s trade unions are “satisfied” with the wage deal reached with the government. National Federation of Workers’ Councils (MOSZ) head Imre Palkovics told public television that it was many years since employee representatives had achieved as great a success as the current deal.
He said unions had fought for 10 years to ensure that the minimum wage for unskilled workers equals the subsistence level, while that of skilled workers should rise above the basic minimum wage.
The agreement will contribute towards a more balanced labour market within the foreseeable future, he said, adding that the deal would also boost the country’s competitiveness.
László Kordás, the head of unions association MaSzSz, said the agreement would raise the minimum wage to the subsistence level by 2018. Unions want to see wage growth for pay categories over the minimum wage in the double digits too, he added.
Péter Futó, chairman of employers’ association MGyOSz, said the minimum wage increases would be a big burden for businesses but they would contribute to improving the country’s competitiveness as well as preserving the pool of skilled labourers.
Péter Lakatos, the deputy chairman of MGyOSz, said the numbers agreed by the three sides assume a “much more efficient” economy, which he said could only be achieved if the government, employers and employees all work together. The agreement is in effect an “obligation” for everybody to “contribute more” to the economy, he said.
Lakatos said the biggest burden from the minimum wage increases would be on businesses that work with fixed prices.
He added, however, that there had not been enough time to precisely model the proposed wage increases and it remained to be seen how they would affect small businesses, Hungarian plants of international companies and suppliers.
Lakatos said it is important to avoid that employers resort to hiring black market labour and that the gap between Hungarian and international companies’ efficiency widens. It was important to ensure that more and more fostered workers find their way back to the primary labour market.
According to Prime Minister Viktor Orbán, the agreement was made possible by the hard work of “millions of Hungarians”. The possibility of raising wages is not the result of favourable global economic trends or luck, nor was it “given to us by the IMF”, Orbán said, noting that the precondition for the deal was a healthy labour market and a “functioning economy”.
He said the matter of raising wages was not one of “goodwill” but rather a matter of the competitiveness of the economy.
Orbán said that although regional inequality is a factor in Hungary’s labour market and employees may not always get to work the jobs they want, “we can say that anyone willing to work in Hungary can find themselves a job”. There would soon be a need for another agreement that deals with technological modernisation, robotisation and digitalisation, and how Hungary’s economy and society adjust to these trends.
Ruling Fidesz group leader Lajos Kósa said that as Hungary is getting stronger, efforts to close the gap between average wages in Hungary and the European Union should start. The unprecedented rise in the minimum wage would promote competitiveness and help keep workers in Hungary. The minimum wage will have increased more in four years than during eight years of Socialist government, he added.
The opposition LMP said “there is no good wage deal without fair taxation”. LMP co-leader Bernadett Szél said the planned wage rises and reduced corporate tax would not help low earners cross the poverty line.
She insisted that the talks should have been aimed at a more equitable tax system rather than focused on compensating employers for the wage rise. Reducing the corporate tax had “nothing to do” with minimum wages and was “another gift in the hundred billion forint range” to foreign companies.
The Socialist Party accused ruling Fidesz of working to the benefit of international companies. It said the government should seek to reduce the burden on small- and medium-size enterprises rather than grant tax cuts to large firms.
“It is the top 10-20 percent only that benefits from the economic policies of the Fidesz elite,” the party said. People living on wages and salaries were “taxed to death” while their tax forints were used to “reduce the taxes of the rich and multinationals”.
The Socialists insisted that “in no other country does the state collect over one third of the minimum wage”.