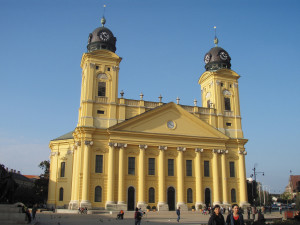 The church with the loud bell

There are some lovely towns to discover around Hungary beyond Budapest, in any season. This week The Budapest Times visited the country’s second-largest city, Debrecen.

If you want to know what a very large church bell sounds like when standing next to it, ask me. It’s loud. Unplanned and unexpected, the bell struck twice while my host and I were about to slide past on the narrow ledge, six floors up – by lift! – in the left tower of Debrecen’s Great Reformation Church.
It’s my first and only church tower lift experience, and already memorable. The tall gent who had caused the bell to ring explained he was just testing the bell. Well it works.
The bell still ringing in our ears, we walked out onto the bridge between the two towers, high above Kossuth square, part of the city’s central pedestrian zone. On the right at street level below us is the elaborately decorated Arany Bika (Golden Bull) hotel, a legacy of the rich Bika family, large enough to accommodate the Bela Bartok concert hall inside.
On the left is the grand old town hall. You couldn’t guess looking down from this great height that in 1802 a huge fire had destroyed much of the city – as well as St. Andrews, the church that had stood on this site since the 13th century.
Display cases inside the Great Reformation Church contain various artefacts, perhaps the most interesting being the oldest Bible in Hungarian, published in 1590. Not surprisingly given this crazy language, it took three years to translate. There are maybe just another four copies, all hand-written of course.
The great bell rang again, this time signalling the actual time, which to me meant lunchtime: time to taste the genuine Debreceni sausage (always in pairs) for which this place is famous. 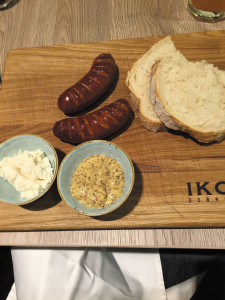 My host took me to Ikon, a smart eatery blending contemporary flair with traditional produce, not far along Piac (Market) street from the Golden Bull. After a thirst-quenching quince syrup with mineral water, the little darling twin sausages arrived, accompanied by wonderful, home-made horseradish and mustard. Made from the unique Hungarian-bred mangalica pork, they are light but big on flavour.
The Great Church is a Reformation landmark and Debreciners boast of the city being called “Calvinist Rome”. But the Roman Catholics have St. Anna church, built 1721-46, where we examined the “authenticated copy” of the Shroud of Turin.
When Pope John Paul II visited Debrecen in 1991 – a huge event for the city – he made a point of visiting the Calvinist Great Church as a sign of reconciliation.
As for the Jewish community, they are mainly served by the 1892 Páasti street synagogue, finally renovated and reopened in 2014 with the help of over half a million euros from the EU.
A long, melancholy memorial wall outside is inscribed with the names of each of the 6000 Jews from Debrecen who perished in the Holocaust, decimating the city’s Jewish population of 12,000. Today there are no more than 800 left.
The synagogue also functions as a stop for tourists who like to marvel at the renovated remains of the ancient mikvah (ritual bathing chamber) with a dozen former baths now filled mostly with earth, topped up with pebbles, under shallow water and covered in glass.
At one end of the room is a wet bar. It stocks a kosher Zion brand dry red from Israel (quite good), for function guests and other visitors. You have to book, already. The mikvah for regular use is in a smaller synagogue nearby.
Away from the churches and synagogues (there are no mosques), Debrecen is abuzz with some 30,000 university students, of whom about 10% are international in origin, mainly from Africa and India.
Needless to say they patronise the bars and cafes, such as the Ruin Pub, a ramshackle bar with several rooms all furnished and decorated, it seems, from the local tip, as is the custom for such venues. We found a small table and sat on mis-matched chairs. 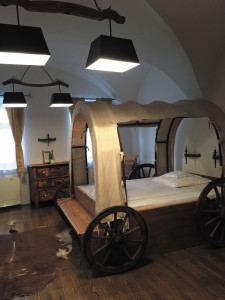 For total contrast, my host took me to DiVino, on Piac street, across the road from the Golden Bull in the main pedestrian mall, where di smart young professionals gather, drinking di vino and listening to di jazz trio.
For a casual morning coffee, we stopped at Cut & Caffe, whose owner Gábor is a coffee fanatic. The coffee arrives with a dedicated card showing the blend (mine was Ethiopia Chelba) and the handwritten date of when it was roasted – just a couple of days before serving, in my case.
These little flourishes and eccentricities continued at the Régi Posta (Old Post Office) hotel where I spent the night – in a replica of a lovely old canvas covered ox-drawn cart. The spacious room (obviously, even without the oxen) also features a matching cartwheel chair, timber flooring and a cowhide mat. (And heated bathroom floor in colder months!)
Debrecen, Hungary’s second-largest city (population 210,000), boasts one of the country’s most interesting museums, once the private, eclectic collection of the wealthy Frigyes Déri. It needs a few hours to fully explore, from the fascinating Debrecen historical to Japanese military (amazing samples of Samurai armour) to Egyptology.
But surely the highlight is the enormous paintings (over 4m x 6m) featuring Christ at the time of his trial, by Hungary’s famed Mihály Munkácsy. Two are exhibited in a dedicated, darkened room that show them off to best advantage.
Various gastro fairs are held in Debrecen from April each year, including the magnificent mangalica pork festival, one of whose “royal houses” is the Family Kövér (means Fat in English … I am not making this up).
But of the many events in the city, perhaps the annual Flower Festival is the best known around the country, which attracts some 100,000 visitors over four days, and is telecast as if it were a rock concert.
They have those, too, in the precinct of the new, state-of-the-art 20,000-seat Nagyerdei (Bigforest) stadium, opened in 2014. It took 15 months to build; pretty quick but that’s because they spent a full year meticulously planning it.
And as its passionate marketing manager Tibor Krecz explains, it’s not just a stadium but a service centre, in which the stadium is one of several services. It’s the home of the beloved local soccer team, the LOKI (from its origins as the Locomotive members soccer club), but it also hosts the flower show.
It has a strikingly designed public bar with three giant screens to show games at home or away (domestic and international) and an ice-skating rink in the winter. 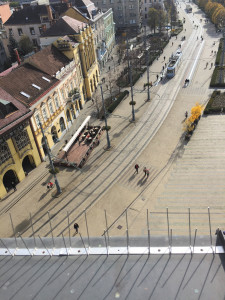 The view from the church

The concerts, as often as twice a week, take place in a dedicated space behind one section of the red and white seats of the stand (club colours), which avoids sharp corners; it bends around the four corners.
Adjacent to the stadium, in the verdant Nagyerdei Park and Forest with its serene Frog Pond, is the newly renovated water tower, with a trendy café downstairs (catered by the Cut & Coffee people), and  Aquaticum, the city’s thermal spa and medicinal centre, with several thermal pools plus a regular swimming pool and a water theme park.
I worked my way up from the 32C pool via 35C and 38C to the 40C, which is adjacent to the icy 20C for those with the willing bodies and minds to go from the hot to cold and vice versa. It is bracing, I can tell you, but apparently good for the heart. My favourite is the 36C outside pool where, in the cold autumn air, steam rises off the water and adds a mystical quality to the forest views.
The water is a light brown thanks to all the minerals, but its therapeutic qualities make up for its downbeat appearance. And no, it doesn’t make your skin brown.
The complex is completed by a “sauna world”, a medical support section and sport medicine centre. Plus a four-star hotel, which hosted us for lunch in its Natura Restaurant.
The menu caters for customers with food allergies, from which I am fortunate not to suffer. That means I can indulge in the rest of the menu, notably a tender pork medallions dish with light paprika sauce, a terrific potato and vegetable rosti, green baby beans bundled in bacon, and a few decorative rings of fried leek. Did I mention the gypsy-cherry schnapps?
In short, I found that there is much more to Debrecen than its sausage, wonderful as that is.

Next in the series: Kecskemét