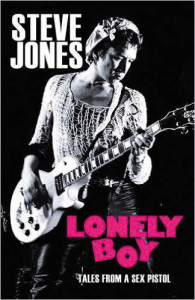 Jones was born in Shepherd’s Bush, west London, in 1955 into a sorry life. An illegitimate only child, he grew up in straitened circumstances with his young mother, a hairdresser, and his grandparents after his father, an amateur boxer, left when he was two years old.
Still, he was happy enough for a few years until the entry of a step-father who sexually abused him, just once but it contributed to Jones’ going off the rails. We see a rather ragamuffin neglected boy who responded to his sadness by learning next to nothing at school and roaming the streets to peep in windows and steal anything not nailed down.
Simply put, Jones was a yob, a low-life one-teenager west London crime wave stealing bikes and shoplifting, then progressing to nicking guitars and cars. It was a dark and depressing time and he has blanked some of it out of his memory – assisted by the drugs.
With 14 criminal convictions he was the subject of a council care-order and spent a year in a remand centre, which he says was more enjoyable than being at home. A life as a full-time crim beckoned but his interest in music, particularly the glam rock of David Bowie and Roxy Music, became a lifeline. Jones started to gravitate around the fashion scene of Malcolm McLaren and Vivienne Westwood in trendy Kings Road, Chelsea,, and this led to him and school friend Paul Cook founding the band in 1972 that would mutate into the infamous Sex Pistols.
When Johnny Rotten came on board in 1975 and Sid Vicious in 1977, the Pistols were ready to scandalise the nation with their alternative national anthem, “God Save the Queen”, handily in time for the Queen’s Silver Jubilee.
This period is the real meat for readers. The Pistols only recorded one album and four singles but they galvanised one and all, particularly the scandalous appearance on Bill Grundy’s “Today” TV show. Grundy, who’d downed a few drinks, treated the band and their entourage with contempt and goaded them into foul language, live on air.
The ensuing public outrage is marked down by Jones as the pivotal moment when the Pistols became public enemy number one. Their career suddenly became no longer about music but about making headlines instead. The Pistols finally imploded in internal animosity in 1978 but their punk influence lives on, for one in the “The Filth and the Fury” documentary of 2000.
As a Pistol, Jones wrote the song “Lonely Boy” with the lyric “I’m all alone, I ain’t got no home” (actually about a lost love), which gave him the title for his book. Post-Pistols, he relocated to Los Angeles and became a junkie who stole from people kind enough to offer him a couch to sleep on. Finally he cleaned up, learned to read and write, and these days hosts a radio show called “Jonesy’s Jukebox” in LA. Sixty-one years old. Respectable.
His book is ghost-written but remains in Jones’ cor-blimey-Jack-the-lad-how’s-yer-favver style. Read it with a slang dictionary at hand, don’t wince too much at the grammatical abominations and accept oodles of naughty words with the same number of letters as the Sex Pistols had members.
Jones knows he’s not going to come out of his book smelling of roses. He says it makes him almost physically sick to think of some of the bad things he got up to, but he’s trying to be a less despicable person nowadays and has been making amends to some of the people he wronged.
The damage has been done but isn’t it a human’s right to learn from mistakes and improve oneself?