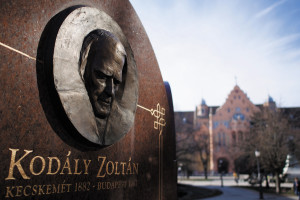 Kecskemét is the birthplace
of legendary Zoltán Kodály

There are some lovely towns to discover around Hungary beyond Budapest, in any season. This week The Budapest Times visited Kecskemét, home town of Kodály and the horsemen of the Great Plain.

Not to boast, but I knocked off the empty wine bottle sitting on a beam about three metres away on my second attempt with the fancy long whip – the karikás ostor – the csikós (horsemen) of the Hungarian plains (puszta) use. Earned me a bottle of red wine, and not a little kudos from the other visitors and of course the horsemen.
It was like shooting practice – with a whip not a gun. Unlike the horsemen, I was not wearing the traditional flowing blue costume and black hat. Just a swagger …
Our small group had enjoyed a dazzling display of horsemanship as the csikós boys handled their horses in formation, rode them standing with their feet on the horses’ haunches and made them sit, roll over and make an armchair of their front legs while sitting like dogs – all the time cracking their whips in synchronised rhythm.
Their four-horse carriage teams have won 25 Olympic gold medals since the 1970s; this involves steering the horses through two sets of markers set with barely enough room, without touching them. There are 120 horses at this ranch alone, from the beautiful white Lipizzaners to the giant redhead (what a mane!) we saw in the stables of the Tanya Csárda. They will accept bookings just about any time of the year.
After all the excitement we were ready for lunch at Tanya Csárda’s own restaurant, the oldest and most famous of more than a dozen working ranches around Kecskemét, capital of the Great Plain in the central west of Hungary. 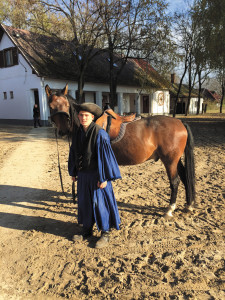 A csikós at
Tanya Csárda

Renowned for its excellent kitchen with a five-page menu, Tanya Csárda is also known (notably by the locals) as a most generous kitchen. That’s why you will see patrons walking out with white plastic bags carrying white plastic containers – of the loved but unfinished remains of their meal.
Our shared lunch for two provided two more meals for me, and I would never call them leftovers. Our host Anika recommended the cauldron gulyás and her boasting is justified; it is a dish every restaurant serves in some form but oh so few do it well. Here, it can be trusted. Actually, it’s addictive; beware.
Then Anika sent out a tasting platter of tasty, tender roasted pork knuckle, full-flavoured grilled goose liver, roasted drumsticks and roast potatoes that fought for attention with the sensational steamed cabbage hiding under it all.
Luckily they have great apricot schnapps (their specialty) to calm the stomach … they also serve it as a welcome to the ranch, with tasty pastry.
Tanya Csárda (they operate two ranches now, the first since the 1970s) is 20 kilometres from Kecskemét, itself just an hour by car on the M5 from Budapest. This city of parks and gardens – and a wide variety of ancient churches – has a calmly seductive, tree-lined and pedestrian-friendly boulevard (Rákoczy utca) which runs from the train station to the city centre, where cafes and shops mix with grander buildings such as the Leskowsky Musical Instruments Museum, offering visitors a chance to not only marvel at the range of thousands of music-making tools from around the world but even play them.
Opposite is what used to be the Art Cafe, a small and atmospheric cafe with a cute mezzanine that until recently would display artworks by emerging artists. It’s now the Bodza Bar; no paintings but still loads of atmos. (Bodza is elderberry …) 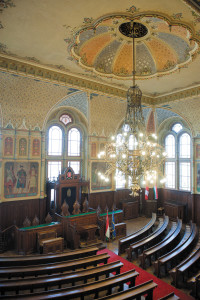 At the end of Rákoczy utca is the shiny and relatively new shopping centre, Malom (mill), on the site of the ancient flour mill. On the fourth-floor terrace (away from the designer shops) there is an extensive view over much of the city – I counted no fewer than nine church spires.
Kecskemét is the birthplace of legendary Zoltán Kodály, who established the much-admired Kodály music-teaching method and founded the elementary music school here in 1950.
The Kodály Institute is a faculty of the Academy of Music in Budapest, and even if you can’t make one of the many concerts given by the students with the Kecskemét Symphony Orchestra, you can’t avoid hearing some Kodály every day, since the magnificent town hall boasts the three-octave carillon bells that chime his music – along with the music of Mozart, Erkel, Beethoven – at five minutes past the hour … so as to avoid the plethora of church bells going off. But at noon every day, this gentle musical monster asserts itself with a seven-minute concert.
The other favourite son of the city is József Katona, the poet, actor, playwright and author of the legendary historical drama Bánk Bán, who died of an unexpected heart attack on April 16, 1830, aged just 39. It happened right on the street outside the town hall.
The spot is marked – poetically enough – with a stone split asunder. The theatre named in his honour attracted almost 100,000 visitors in 2015/16.
Speaking of the town hall, you could mistake it for the nation’s parliament – unless you knew the real one. This magnificent building houses the 300 municipal workers in stately fashion, with tiled corridors, decorated ceilings, columns and arches everywhere you look.
The great hall, painted by the acclaimed artist Bertalan Székely (1835-1910), seats about 230 and hosts council meetings, concerts and weddings. In summer, there can be three weddings taking place simultaneously. Visitors are welcome (to the town hall, not the weddings).
In 2017/18 the town hall will be refurbished, as will the city’s public transport, as part of the national new cities program. 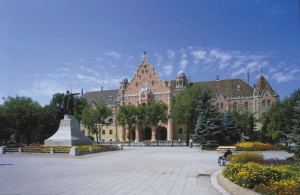 Other buildings of note and worthy of posing for a few selfies are the 15th-century Barátok (Friends) church next to the town hall, the beautiful József Katona theatre just 50 metres from there – and the building they call the Cifra Palota, a wonderful example of secessionist architecture, built in 1902, now a gallery/museum, boasting a permanent collection of early 20th-century Hungarian painters, and a changing program throughout the year.
The many summer festivities are mirrored in winter with indoor attractions ranging from 24-hour movie marathons at the Malom and swimming pool nights in the extremely popular thermal spa complex (over 360,000 admissions in 2015, almost a third for medicinal purposes), to gastronomical events, such as the fish feast.
The Advent festivities begin in late November, as do the Christmas markets, the main one outside the town hall on its ample square.
Our hosts say – and they claim to speak for all locals as well as the thousands of German workers at the big Mercedes plant – that the main attraction of Kecskemét is quality of life, absence of stress and the abundance of cultural and social amenities, ranging from the horse ranches to Kodály concerts.