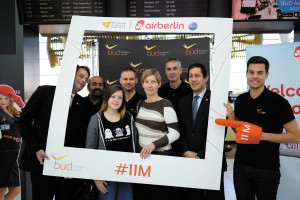 It was becoming apparent around early autumn that Budapest Airport would once again break the record of annual passenger traffic for the third year in a row. The final numbers for 2016 are not available yet but the increase is estimated to be around 10 percent.

Between January and November last year the number of passengers served at Liszt Ferenc International was 10% higher than in the same period of 2015, so there was no doubt the airport would break the record of 10,298,963 in 2016. On 13 December Hajnalka Nagy arrived with her daughter Eszter for an overseas trip with airberlin and she became the 11 millionth passenger of last year. In fact it was to be Nagy’s very first flight.
The 16 new flights launched at Budapest Airport in 2016 contributed to the increased traffic, in addition to a number of other development efforts taken by airlines including increased frequencies or operating larger aircraft on existing routes.
airberlin carrying the lucky eleven millionth passenger started its third daily flight between Budapest and Berlin Tegel last year, offering the added advantage for Hungarian passengers that transfer times are significantly reduced in the case of several overseas connections.
“In 2015 we experienced remarkable passenger traffic, and to watch the robust development continue into 2016 is a rewarding time for us all,” said Kam Jandu, Chief Commercial Officer of Budapest Airport. “We approached the year with a strategy to do all we could to ensure Budapest, and Hungary, remain an attractive and competitive market, and I believe we’ve not only succeeded in this goal but also ensured the demands of our passengers, as well as our business partners, have been met.”