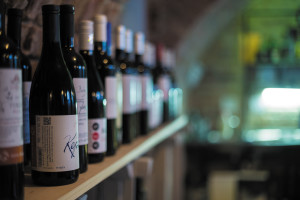 For me, wine falls in to the same category as music and art:  I know what I like and what I don’t like. I have friends who delight in wine, who have made it their business to educate themselves about the various grapes and vintages. They speak knowingly about bouquets and noses using words and phrases that turn their English into a language I neither recognise nor understand. Sometimes I listen. Sometimes I think them quite pretentious. But that says far more about me than it does about them; I’m well versed in my own limitations.

That said, I like my wine. I like discovering new wineries. And I like to know what its story is, what makes it special. But I’d given up on wine tastings. I don’t like being patronised or preached to and when pretentiousness comes with a price and little or no time to really savour the wine, I’m not impressed. I don’t need to know the technicalities and I have no great desire to learn the language. I just want a few good stories accompanied by some interesting wines in comfortable surroundings.
A few weeks ago, in search of a new Siller (that Hungarian lovely that is darker than a rosé but not dark enough to be a red), I ambled into VinoPiano Bor & Tapas Bár, part of the Élesztőház offer at Tűzoltó utca 22 in Budapest’s IXth district. Their sommelier, the very unassuming Kiss Ferenc, had told me that he was expecting some new bottles and I went to sample. Having introduced me to three new wineries, two new Siller, and a very interesting olaszreisling that I’ve been wowing friends with since, I decided that he was a man I could listen to.
We were expecting family for the New Year, most of whom had never been to Hungary before, so I booked a wine tasting for 3pm on the 29th of December. There would be 11 of us. I was promised six wines, tapas, and some good stories. Kiss delivered in spades.
VinoPiano is noted for only stocking natural wines. I was a little disconcerted to hear that 90-95% of wines contain a variety of the 3000 or so legal chemicals used in modern-day viniculture. I’m an avid label reader but apparently these legal chemicals don’t have to be disclosed. Mmmmm….
With the general introduction to winemaking in Hungary over, Kiss took us on a tour of the country. He’d taken my request to heart and produced only what I would call “interesting” wines. He peppered his educational talk with anecdotes and trivia from the country’s wine history, going with the flow and taking his cue from the volume of talk around the table.

The first wine on the card was a 2008 white from Lenkey Pincészet in Mád. That year, they managed to produce 3216 bottles instead of around 15,000 because of a very aggressive mildew. This white, aptly named Túlélő (survivor) was one of them; a dry furmint-hárslevelű-muskotály blend that we liked.
Next, we visited Somló, the smallest of Hungary’s 22 wine regions, comprising just 560 hectares. We went to Sághegy, to sample the notable 2011 Sághegyi Olaszrizling from Dénes Tibor whose 2.5-hectare vineyard uses minimum technology to deliver the ultimate in craft wine-making. For a reason I can’t quite remember, we all came away calling this wine “rock juice”. And we loved it. So much so that I bought some to take with us. A little gem.
From the volcanic hills, we moved to the Mátra, to Gyöngyöspata and the Kékhegy Pince, another small vineyard producing some 600 bottles annually that walks the minimal-interference walk by making the most of opportunities provided by nature.  I’m a Siller fan and had made a special request to include one in the tasting. The 2015 Piroska is now a firm fixture on my list of recommendations. And even though the company I was in might have preferred the reds, they were suitably impressed with their formal introduction to Siller.
And so to the reds, where I generally lose interest. I had a bad accident with a bottle of port back in my Alaska days, the memory of which is still very vivid. So vivid that even sitting within sniffing distance of an open packet of wine gums is enough to bring them flooding back. My challenge to Kiss was to introduce me to a red that I could drink.
His first choice, a 2014 Turán from Nyolcas és Fia in Eger, didn’t do anything for me, but I was alone in my lack of appreciation. The others were drooling over the dark purple, late-harvest offering.
Determined to convert me, Kiss opened a 2013 Kadarka from Szekszárd’s Halmosi Pincészet. Hungary’s most popular grape in the nineteenth century, the kadarka is enjoying a revival of late. The thin skin means less colour and less tannin, both of which suited me fine, thank you very much. I was suitably impressed – as was everyone else. Kiss took his well-deserved bow; his job was done. And again, Halmosi József, like the other viticulturalists featured, believes in working with nature. Tradition for him is not a trend to be followed, but a core belief that influences everything he does. Another to take home.
Staying in Szekszárd, our final wine of the afternoon was a 2009 Kékfrankos from former electrical-engineer-turned-award-winning viticulturalist Dániel Zsolt from Dániel Pince. The others raved. I went back to my Siller.
It was a convivial, relaxed, afternoon in a very unpretentious setting. The tapas – breads, cheeses, olives, meats – were plentiful. The wines were excellent. But more remarkable was the man himself, Kiss Ferenc. Young, enthusiastic, and passionate about his profession, Kiss left us with an appreciation for natural wines and a taste for small vineyards devoted to their craft.
If, as US President Benjamin Franklin supposedly said, wine is constant proof that God loves us and loves to see us happy, Kiss made believers of us all.

Mary Murphy is a freelance writer and public speaker who likes a good wine. Read more at www.unpackingmybottomdrawer.com