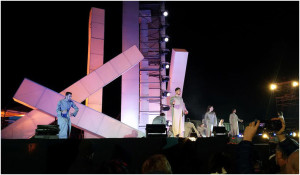 PEOPLE turned out in their thousands to watch the official Pafos2017 capital of culture inauguration ceremony held at the town hall square on January 28.

The show following a series of speeches by officials and was impressive with stunning sets, lighting and music, as residents and visitors to the town, despite the cold, flocked to the free event at the newly revamped October 28 Square outside the town hall.

At the heart of the events was the myth of the birth of Paphos through the union of Pygmalion and Galatea. Performers included dozens of professional dancers and young people, 315 children from elementary schools, who narrated the history of the birth of Paphos holding beautiful lanterns, as well as volunteers from all across the island.

Greek and Turkish Cypriot musicians and singers formed a harmonious ensemble and joined the choir and jazz orchestra from Aarhus, Paphos’ sister European Capital of Europe. Unique compositions and original adaptations of musical works, choreographies and animation, marked a historic day for Paphos and Cyprus.

In attendance were 40 representatives from other European Capitals, dignitaries from several European embassies in Cyprus, as well as100 or so foreign media and journalists from Europe and Asia.

The ceremony was attended by the President of the House of Representatives and Acting President of the Republic, Demetris Syllouris, Archbishop Chrysostomos and leaders of political parties.

Deeply moved and proud, Christos Patsalides, the chairman of the organisation Pafos2017, addressed the crowds first and said: “As Chairman of the organisation Pafos2017, I am deeply honoured, happy and humbled that my city, our city, the district of Paphos, as well as the whole of Cyprus, officially welcomes tonight the historic title of the European Capital of Culture, a title we share with the city of Aarhus in Denmark.“

He said that Paphos’ European Capital of Culture’s programme “Open Air Factory” is a unique opportunity to create events, happenings and art works in open-air spaces.

Mayor of Paphos Phedonas Phedonos who spoke next said: “Paphos was always proud of its history and its culture, but tonight, as host of the major European festival of culture, together with Aarhus in Denmark, justifiably, we feel greater pride.”

“It is the first European city that accepted Christianity by the Apostle Paul, it’s the city that for centuries has been the crossroads and meeting place of religions and cultures and was the capital of Cyprus for 500 years in the Hellenistic and Roman period. “

He mentioned the rich array of archaeological monuments, classical, Roman, Byzantine, the Frankish and Ottoman, and added that the sky is marked with steeples and minarets, in a timeless call of peace, coexistence and brotherhood.

The mayor spoke of Paphos’ ambition as European Capital of Culture, a leading European institution, to be recorded in history as a small town, but a model vehicle where culture brings together the strengths and capabilities to accomplish and regenerate.

“Culture is a source of inspiration and creativity and a conduit for change. At various times in the long history of this city, it has been a lever for growth and progress,” he said.

An address was also made by European Commissioner for Humanitarian Aid and Crisis Management Christos Stylianides.

He said that during a time where Europe is faced with concern and uncertainty Pafos2017 sends a clear message of transparency and openness of beliefs and horizons, acceptance of other cultures and diversity, demonstrating the importance of an open society.

“Unfortunately, intolerance and discrimination have been on the rise throughout Europe. The fundamental European values and ideals are put to the test. Populism has been gaining ground through manifestos and promises about the exclusion of others,” he said.

He said that culture can act as a bridge which promotes understanding and tackles mutual distrust. “Culture can contribute decisively to the strengthening of our communities and guide us to joint solutions,” he said.

Pafos2017 demonstrates precisely that, he added, with the motto “Linking continents, bridging cultures”, the city makes the promise to create constructive exchanges between people and communities.

He said Paphos has always been a gate to the European Mediterranean that different communities have long coexisted and that multiculturalism is simply part of the city’s DNA.

“Paphos may be the smallest city to have ever received the title of the European Capital of Culture, but there is no doubt about the very important message it has to offer to the whole of Europe, during these hard times,” he said.

The address of the President of the Republic, who was abroad, was read out by Costas Kadis, Minister of Education and Culture: “This opening ceremony, which is inspired by the founding myths of the city’s birth, is undoubtedly a historic moment not only for Paphos but for the whole of Cyprus.”

He said that with the motto “Linking Continents, Bridging Cultures”, Paphos sends a strong message of culture and peace.

“At a time when humanity is faced with the scourge of terrorism, neighbouring regions suffer armed conflicts and immigrants face a daily struggle under adverse conditions with the hope for a better tomorrow, the thematic programme of actions of the European Capital of Culture 2017 sends messages of hope, promoting peace through Art and Culture”, he said

“Peace and reunification, which we also seek for our country, through the ongoing process of intensive negotiations and talks. We hope that our efforts will be successful, so that all legal residents of this country can coexist in a secure and prosperous environment, where diversity and human rights are respected. We will never stop working towards this direction and that is why we never stop hoping. “