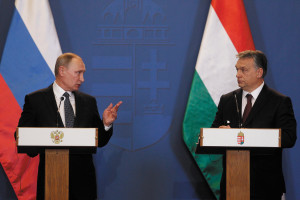 Orbán said the question concerning the stability of energy supplies via Ukraine was unavoidable and “several uncertainties are known”. Whereas Hungary has always been interested in diversification, the EU had prevented the South Stream project from going ahead, he said. The Hungarian and Slovak networks were interconnected and this meant Hungary could receive gas from the north. Russia is not opposed to this, he added.
Regarding the upgrade of Hungary’s sole nuclear power plant in Paks, which is being financed by a loan from Russia, Orbán said most obstacles to the nuclear co-operation between the two countries have been cleared. He insisted that the bilateral agreements on the project were in line with European Union rules. The EU will soon come to a decision on the single remaining open question, on state aid, in connection with the project, he said.
“It is in the air” that the world is undergoing a major transformation, Orbán said, adding that this transformation would create better conditions for European-Russian co-operation, including Hungarian-Russian co-operation, compared with “what has been experienced in recent years”.
Orbán said Hungary and Russia were being forced to work together in a “difficult international environment”, as anti-Russian policies have become popular in Western Europe. On the topic of European Union sanctions against Russia, Orbán said Hungary had suffered USD 6.5 billion in losses because of them.
He said it was “mistaken” to make an economic problem out of a political one because then “everybody loses out … It is difficult to imagine Hungary being successful without developing open, strong and fruitful economic and trade co-operation with the most important players in the global economy”. Co-operation between Hungary and Russia was something to be “cherished”.

Stopping gas is not a political goal

Putin underlined his country’s commitment to supplying gas to Hungary with “100 percent reliability”. He said Moscow had not made it a political goal to stop transmissions of gas through Ukraine. If the route is reliable and it makes economic sense to use it, Russia will supply its gas via Ukraine, he said. Hungary has the technical means to receive gas through the Nord Stream 2 pipeline via Austria or Slovakia, Putin noted.
“It is in our interests to co-operate,” Putin said. “We will find a way to implement gas supplies. I’d like to depoliticise issues that are purely economic. I’d stress that we do not rule out any direction [of gas supplies]”.
Even Bulgaria might come into play after having yielded to European Commission pressure. “If it reconsiders its stance, then we could renegotiate the issue,” Putin said. “But I’d like assurances that Russian companies are not going to make losses due to unconsidered decisions.”
On another subject, Putin said he and Orbán were in agreement about the need to strengthen co-operation in the fight against international terrorism. “We were in agreement that our efforts need to be unified,” he said.
Putin added that he had briefed Orbán about Russia’s position in connection with the situation in eastern and south-eastern Ukraine, and about events in the Middle East. He hoped that resolving the problems in the Middle East would contribute to the easing of Europe’s migration crisis. “We are working together with our Hungarian partners in the aforementioned areas,” Putin said.
The Russian president blamed Kiev for the recent escalation in fighting in eastern Ukraine. He argued that the Ukrainian government was looking to present itself as a victim of the flare-up in order to win financial support from the West.
Putin insisted that Ukraine’s economic and social policies had failed. The Ukrainian government had been trying to use the conflict as a way to silence its opposition. He said another reason for the escalation of the conflict was that Kiev had no intention of adhering to the Minsk ceasefire agree-ment, and was therefore searching for an excuse to pull out of it.

Over 300 demonstrators gathered, called by the opposition Együtt party, to protest against the visit of Putin. The alliance between Orbán and Putin “is a blind alley” and Hungary belongs to the West, party officials said. Meeting half a kilometre from Parliament, the demonstrators booed and hissed when Putin’s convoy passed by in the distance.
Hungary and Russia can be friends, the opposition Socialists said. “We must be able to co-operate but on new foundations,” party leader Gyula Molnár said. “Opening to the East should not go together with shutting off the West.”
Molnar said that if any European state lets Russia too close, it could easily end up like Ukraine. Commenting on Orbán, he said the same man who “chased the Russians away” 28 years ago was now “letting them return straight to the cash till”.
The radical nationalist Jobbik party welcomed Putin’s visit but accused Orbán of dishonesty by insisting that the imposition of European Union sanctions against Russia had been out of Hungary’s hands. Jobbik MP Márton Gyöngyösi argued that in Brussels Orbán had continually voted to extend the sanctions, while Jobbik’s standpoint was they were contrary to Hungary’s national interests.
Opposition Democratic Coalition leader Ferenc Gyurcsány called for Hungary to stand by Europe, “which Russia threatens”, amid the current global political transformation. Political pragmatism should not be confused with abandoning one’s interests and principles, Gyurcsány said. No Russian investment could be large enough for Hungary to ignore Russia’s aggression in Ukraine.