The village of Tarnabod sits 113 kilometres east of Budapest. A shadow of its former self, today success and plenty are but a memory. Like other villages in rural Hungary, things are bad in Tarnabod. Jobs are scarce, resources few. And, for many villagers, by the last Saturday of the month, food and money have run out.

In 2011, Gabriella, a then Budapest-based journalist, visited the village to do a piece on child poverty. It was the beginning of a journey that saw her and her best friend and fellow journalist Kata getting involved in making life a little easier for the locals.
Tarnabod és mi (Tarnabod and us) was born. What started as donations of food, clothes and cleaning materials has grown into solid support. Their relationship with the village is open and trusting, and their help is much appreciated.  When the kids go back to school, Kata and co provide school supplies. When the football team needs new boots, they are there. When the village needs hot food, they’re there, too.
The Saturday I was there, it was -12°C. I watched as chef Daniel, from Revolucíon Budapest, one of the city’s top Tex-Mex restaurants (Akácfa u. 57), and his team tried valiantly to get the barrel fires going. They were there to cook a hot stew for the villagers (all 600 or so of them). They’ve been doing this every month in winter and every second month in summer since 2015.
They worked outside, on open fires, in the freezing cold. When the food was ready, word went around and the people came to collect.
Up the road, in the tanoda (study hall), Zsuzsa and her gang from Caledonia Social Bites prepared hot chocolate. We were lucky. We got to work inside. In the next room visiting singers, musicians, and storytellers entertained the kids. The place rocked.
Two of the local young lads have gotten places in a middle school in Budapest – one is particularly talented and destined for great things. They both come from large families with unemployed parents. This scholarship is their way out of the cycle of poverty in which the village is mired.
And that’s Kata’s aim – to show the kids that they can have a life outside the village, that theirs can be a different world.
As we worked, I met other volunteers from other groups, all there to contribute in their own way; volunteers such as 20-year-old Selina, German born of Turkish descent, who’s spending her gap year working in Tarnabod. An Order of Malta programme funds her food and accommodation, and gives her pocket money in return for the work she does at the preschool, the kindergarten, the primary school and the tanoda.
There are far more glamorous places to spend a gap year, but a 10-day student exchange to Debrecen sealed her fate. Selina fell for Hungary in a big way and wanted to contribute to the greater good.
She’s one of a group of 12 young people on the programme from Spain, Germany and Poland aged 18–29 who are volunteering around the country, giving of their time and energy and getting invaluable life experience in return. The kids love her and she gives every ounce of that love back, and more besides.
A car pulled up. Heni and Szilvia had arrived from Debrecen with bags of clothes. They got involved with Tarnabod és mi after experiencing first-hand how activism and volunteerism work. For nearly 80 days straight they worked their day jobs and then helped man the train station in Debrecen from 6pm until 1am helping refugees figure out where they were going.
With a multinational student cohort at the local university, they had lots of willing translators and interpreters who juggled exam schedules to be available. Since then, the pair have continued to do what they can for those in need. They joined forces with the Bike Mafia in Debrecen to feed the homeless and are in the process of setting up an NGO. 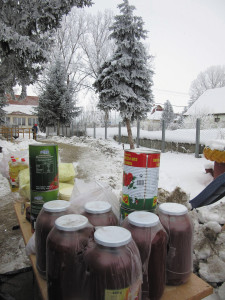 A couple of weeks ago, a Roma family in the village of Sáp heard a knock on the door. Officials came and removed their eight youngest kids and two grandkids to places unknown, saying that the house wasn’t fit for kids to live in (the family had just moved in). For three days, the parents didn’t know where the children had been taken.
The dad’s boss posted a request for help on his Facebook page, a request that was brought to Szilvia’s attention. Thanks to local volunteers and community donations, within six days the house had a new fitted kitchen and new floors. It was fully furnished and carpeted. The cupboards were stocked with food, the wardrobes filled with clothes. The kids are expected home soon.
The hot chocolate went down a treat. It did this jaded heart good to see so many smiling, laughing faces, despite the odds. Because the odds ain’t good. And despite there being people willing to give of themselves and their time for no other reason than to help others, naysayers, politics and egos can thwart the best of intentions.
What’s needed is action. What’s needed are more people like the Tarnabod crew – people who do more than sit around a table and discuss the whys and wherefores of possibilities; people who recognise a need and act on it.
Yes, there will be those who show up for the photo opp. And perhaps the gloved volunteers who went to draw with kids in a refugee camp did more harm than good.  But as long as the Katas in this world make things happen, there is hope.
And today, more than ever, we need to work together, to give of ourselves, to do what we can to re-dress the imbalance and mitigate the fear being fomented by those in charge of our world.
PS: The villagers badly need gloves – all sizes. The collection point is Jurányi Produkciós Ház, II. District, Jurányi u.1. Give what you can. Make a difference.

Mary Murphy is a freelance writer and public speaker who feels blessed to have witnessed selflessness in action. Read more at www.unpackingmybottomdrawer.com