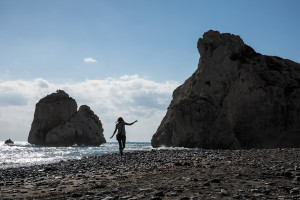 It is early afternoon. The sun is gently shining over the azure sea.  About 15-20 people are spread around this part of the seaside. They are walking about while busily looking for something on the ground. They are of all ages, and they are in the Bay of Aphrodite.

This place got its name because it is supposed to be Aphrodite’s legendary birthplace. She is the Greek goddess of love, beauty, pleasure and procreation.  According to the tourist guides, if one finds – here among the billions of gravels – a pebble that is heart-shaped, then that person will be lucky in love.
Of course, everybody is looking for a heart-shaped stone. Who would not want to be lucky in love? Perhaps the stone heart softens even the hard hearts? And this has been going on for thousands of years.
This is Cyprus, and on this island many things are about love. The names of some flowers are ladies’ names (Helena, Violet) and have exciting mythological love stories. Out of rose leaves, stimulating drinks are produced – they’re to help to guide the lovers into each other’s arms.
But in the history of the island, the relation between men and women had not always been one of a mutual partnership. In order to make the men work harder and bring home more money for the ladies so they would have more to spend, the women set up armies. 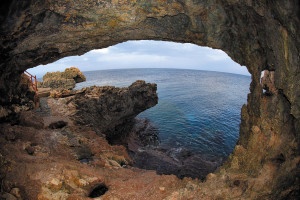 They hunted men down, and if they were found not industrious enough, the women killed them. This happened in the Sixth Century B.C. until there were hardly any men left. Then the remaining men were collected and exhibited in the main squares. Their lives depended on the size and performance of their sexual organ.
An extraordinary story but visitors find it fascinating. Since love is one of the most important matters not only in Cyprus but in other places in the world, Cyprus is doing its best to bring in tourists for its ancient history, as well.
Blue sea, white sand lying in the background, and a little archway standing behind an altar-looking table at an ideal spot; this is where a couple has to stand so that the photographers get the best setting for wedding pictures.
In order to extend seasonal tourism, Cyprus’s tourist industry gives significant importance to organising weddings for people coming from abroad. It costs just over EUR 280 but the couple has to spend 15 days on the island before they can get married, which can be organised at hotels, registry offices or on the beach.
And if someone is not here to get married, but instead for the rich, often turbulent past – there is plenty of scope for that. According to folklore, as a young girl the Virgin Mary also visited the island. The place she lay down to sleep has a church built on it with three nunneries around it. Many painters, composers, and writers came for a visit – mostly for inspiration or love or even to live here like the English poet, Lord Byron. 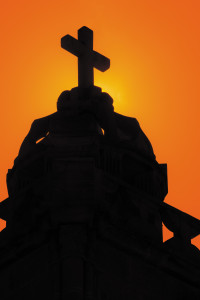 At most locations, the earth of Cyprus is red. Thick forests used to cover the island but the islanders cut down the trees for building boats and for processing copper.  As the Cypriots say, wherever they start digging under 40 centimetres of top soil, they find ruins.
One can discover remains of medieval castles, vast archaeological sites, classical cities or small villages: all indicate the island’s rich historical past.
Many nations and cultures were on the island at various times. Some left their marks while others took parts of the culture they found here. Following the 1974 Turkish invasion of Cyprus, to keep the peace UN soldiers have been stationed between the Greek and the Turkish regions.
Drivers are sitting on the right-hand side of their vehicles. This indicates that until its declaration of independence in 1960, Cyprus was, at first, part of the British Empire, and since Independence it is a British Commonwealth member.
Some hotels focus solely on the attraction of love and they call themselves Honeymoon Hotels. Some hotel proprietors note it does not even matter if this is not the first honeymoon for the couple – just come.