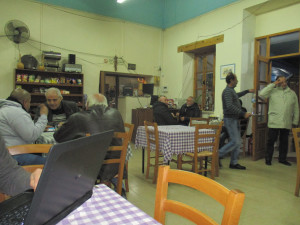 An Englishman, an Irishman and a Scotsman walk into a bar … or, in this case, five Hungarian journalists walk into a taverna in Cyprus … It’s not a joke, but there is some good humour, and there won’t be a big punchline, but it will be an occasion to remember.

The journalists  – three women, two men – have arrived in Cyprus that day to cover the opening of the European Capital of Culture 2017 in the coastal town of Paphos, mythical birthplace of goddess Aphrodite. They are taken by minibus from Larnaka airport to Tochni village to spend a night at Cyprus Villages, where traditional stone-built homes have been converted into guest houses.
A few steps away from the accommodation is the taverna, right on the central square. At first, the journalists reject it as too smoky, and prefer to try to sit outside in the vinyl-walled area where a gas heater is battling a cold and wet January evening.
But it is far too nippy, and the five surrender to the warmth, and smoke, inside the taverna, where a dozen or so local fellows are ignoring the two “No Smoking signs” on the walls. The men-of-the-house are unwinding, presumably after a hard day’s work. Mostly they are playing cards on the chequered tablecloths as they drink and eat. There isn’t a woman customer in sight, just a couple of females in the kitchen.
The taverna is a little timeworn but homespun and welcoming enough. It is a bit of a culture clash though: the wall-mounted TVs are switched off and the locals are enjoying chat and laughter, while the jouros are well loaded with technology: smartphones, laptops, and a Hungarian Television camera and tripod.
After the taverna boss sorts out wifi passwords and security codes for the five visitors, they settle down to checking emails, filing reports, et cetera. Soon they are eating Cyprus-style, which seems to mean that if there are five of you, food for about eight is delivered.
There is the Cypriot cheese halloumi, salad and the inevitable meze, consisting of a selection of dishes from delicious dips and vegetables to a variety of fish and meats. Many plates of food arrive in rapid order, and, soon full, the journalists need plenty of the Cypriot Keo beer and wine to soak it up. 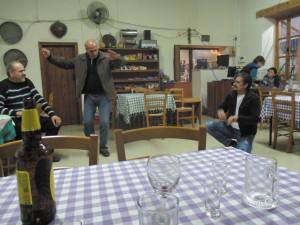 After a while a table of village men send across shots of zivania as a nod of friendship to their foreign visitors. Zivania is a potent distillation of the leftover grape skins and residue from winemaking, and, like pálinka, is downed in one hit, with severe consequences if over-indulged.
Suddenly, some tables are cleared from the centre of the room and a CD of folk music starts playing. A middle-aged Cypriot with a bit of a paunch starts dancing: twirling and kicking up a foot behind his back and slapping his shoe. Balance isn’t so easy, after zivania, but he manages.
Two or three other men join in. The others clap and egg them on. The journalists sit up. This is the real thing. They are in a taverna in a village square in Cyprus and the men are dancing; not for the tourists, for themselves. They are boosted by booze, no doubt, but for the journalists this is A Moment, an authentic travel experience.
The “show” lasts half an hour or so, the Hungarians return the zivania favour and then everyone staggers home not long before midnight. This was an earlyish night: the taverna has no regular closing time. It shuts “whenever”, even if whenever should happen to be 5am.
Next morning the slightly fuzzy-headed Hungarians must be up early to drive to Paphos for the official opening of the Capital of Culture 2017. After the ceremony, a whole restaurant full of dozens of journalists gathers to enjoy the night.
With food and alcohol flowing, they are entertained by two musicians and two male and two female dancers in folk costume. The troupe performs traditional Cypriot folk dances and does tricks such as balancing multiple glasses on the head. A lot of lubricated journalists join in with the dancing. It’s great fun but rather like a Gypsy band in a Budapest restaurant: some professional entertainment to round out the evening.
During their few days in Cyprus, our five journalists will see beautiful iconostases in Orthodox churches, flamingos just offshore in the Med, ancient archaeological ruins and more, and they will fondly remember the night the village men danced in their local taverna.