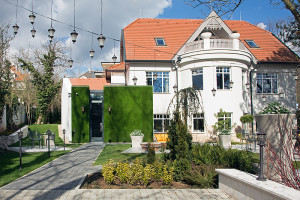 Attractively set up in a stylish villa in affluent District II 18 months ago, Émile restaurant has found itself establishing a reputation that has proved to be a little too upmarket for its own good. Guests from the professional class living around about in the Buda hills have tended to use it for special occasions, rather than for regular visits. A determined effort is under way, then, to bring this rather elite image a little more down to earth, to the benefit of one and all. 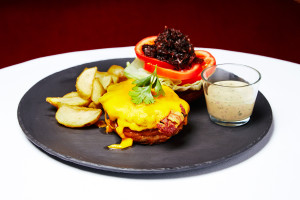 Diners will now find that dishes have been simplified to give them a more popular appeal, with a consequent decrease in prices, and a whole more family-friendly approach is being taken.  The quality of legendary names Gerbeaud and Onyx – part of the gastronomic family that owns Émile – is being maintained, but a burger (with cheddar cheese, mustard dip and baked potatoes) and Székely-cabbage (pork and sauerkraut stew with roasted bacon, sour cream and home-made Hungarian pizza) have appeared on the shortened menu.

As restaurant manager Péter Herr explains, when Émile first opened in mid-2015, he, the chef and some other staff had all worked abroad at Michelin-star restaurants. The consequence, he says, was that Émile became positioned a little higher in the market than it should have been. 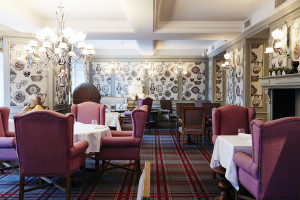 A new team led by executive chef Ági Tóth, who has been with the Gerbeaud group for 16 years, now rules the kitchen, and an entirely new, simpler cooking process has been introduced. The a’la carte menu has been totally changed, with the result that Émile has brought its offering closer to its guests.

Things are not so exclusive, not so complicated, more easy-going. And the loving service remains the same, Herr hastens to add. Fois gras and brioche are still on the menu but the fine dining is now more flexible and hopefully has a more expansive – not expensive – appeal. 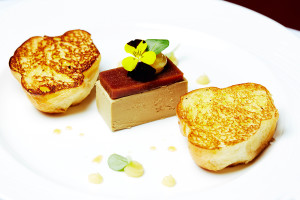 Entry to Émile, on the corner of Gábor Áron utca and Orló utca, takes us through the garden, which will reopen in spring with its cabanas where guests can settle back on the yellow cushions and enjoy the chirruping birds and the frozen mango margarita. A new outdoor area for kids is coming.

The restaurant door opens into the patisserie, where a glass floor section doubles as the ceiling of the wine cellar, giving the feeling of Indiana Jones crossing a ravine on a rope bridge. At the counter are pastries and the famous special handmade Gerbeaud products such as cat tongue, bonbons, cognac cherry and macaron. Sit in or take away.

Alongside, what was once the main dining area itself has now been converted into a colourful and spacious kids’ room, with a kindergarten teacher on hand at weekends to lead the activities while the adults dine upstairs. This is an especial symbol of the shift in emphasis at Émile, where suburban families live around rather than the tourists who are attracted to inner-city Gerbeaud and Onyx. 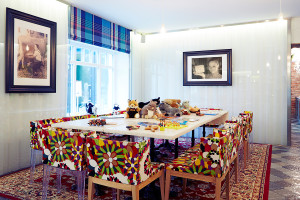 Upstairs now hosts breakfast between 8 and 11.30am, lunch, then the Émile afternoon tea with cakes and pastries between 3 and 6pm, before dinner and closing out the day in the evening with champagne, cocktails and spirits. If guests would like to enjoy lunch after 3pm, from now on they can because Émile is welcoming them with the a’la carte menu between noon and 11.30pm.

Adjoining this large room is the Petit Salon where smaller groups may hold family reunions, perhaps, or simply talk business.

Visiting recently to sample the new approach, The Budapest Times took along an impartial observer, otherwise known as “Wife”, who, supposed to offer intelligent comments, merely uttered things such as “delicious”, “fantastic” and “I must learn to do my vegetables the way they do theirs”, as she scoffed down the grilled salmon slice, cucumber salad with sour cream and Émile Royal Chocolate cake. 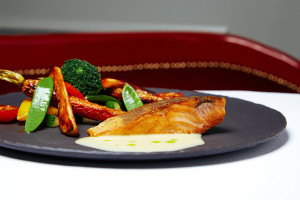