They are the Oscars of Hungarian gastronomy: the prizes awarded each year by the Volkswagen-Dining Guide, primarily the “Golden Frying Pan”
for “Restaurant of the Year”. This year’s winner is Costes, the first Hungarian restaurant to win a Michelin star, in 2010. Other successes at the recent prize-awarding ceremony included “Best Chef”, “Most Innovative Kitchen” and “Most Promising Restaurant”.

The event centre TEREM Budapest was packed for the gala evening, with everyone who is anyone in the Hungarian gastronomy scene there to hang out with the best of the best.

Costes is Restaurant of the Year

Earning 93 of the possible 100 score in the evaluation by Hungarian and international testers, including Italian chef and Michelin tester Fausto Arrighi, Costes improved on its second place last year. The prize, which comprises a framed certificate and a golden frying pan, was received by chef Eszter Palágyi, who has been leading the kitchen of the Michelin star restaurant for almost two years
Several other awards were distributed, sponsored by companies from the gastro industry and the financial sector. MÁK was named most innovative kitchen, sponsored by household appliance manufacturer Neff. Ádám Garai from gourmet restaurant Olimpia won the title “Young Talent of the Year”, from the Gyulai Pálinka distillery.
“Chef of the Year”, sponsored by Nespresso, went to Ákos Sárközi, of Borkonyha. Babel Budapest was selected as “Most Promising Restaurant of the Year”, awarded by Unicum-Riserva.
For the first time this year a one-time gastronomic group performance was awarded. The prize sponsored by financial services provider K&H private banking was handed over to the Hungarian team that made it to the finals at the latest Bocuse d’Or chef competition, comprised of chef Tamás Széll and Szabina Szulló, Zoltán Hamvas, Kevin Szabó and Frigyes Vomberg.
One of the biggest surprises at the gala was the winner of the “Best Streetfood” title, sponsored by Staropramen Brewery. Kemencés Pizza Pizzeria, which has been only known to insiders so far, scored in this category. At first look the restaurant in District XV is not a real eye catcher, but its paper-thin pizzas layered with high-quality ingredients won over the hearts and bellies of the jury. 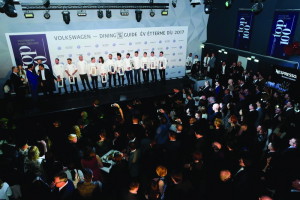 After the distribution of prizes the guests at the Volkswagen-Dining Guide gala had the opportunity to test the culinary arts right there. Catering for the evening was done by MÁK, Olimpia, Costes Downtown, Márga Budapest, Onyx, Platán from Tata, St. Andrea Borbár, Tábla, Laci Konyha! and Fricska Gasztropub, which all presented gourmet bites.
Where there is such a wide selection of high-class restaurants with their own special character as in Hungary, it is especially important to have a clear overview for diners. This is provided by the Volkswagen-Dining Guide TOP100 Restaurant Guide this year again, which was also presented during the gala evening. This is on sale at certain book stores, newspaper stores and service stations for HUF 1690.
The book has more than 300 pages ranking the best 100 restaurants in Hungary plus a wide selection of further restaurant and streetfood recommendations. For every restaurant there is a description in Hungarian and English, with notes on the atmosphere, price level and kitchen.

These are the TOP10 Hungarian restaurants of the year: