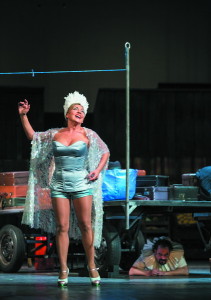 If you were fortunate enough to see the hauntingly beautiful ballet “Manon” during its brief run at the Opera House, you will have a chance once again to experience
the wonderful score of Massenet as the heart-wrenching “Werther” returns to the stage.Additionally, Verdi’s “Nabucco”, a première of “Le Corsaire”, “Cavalleria Rusticana and Pagliacci”, together with an enticing Easter weekend of shows ensure April will be a bewitching theatrical month on the opera and ballet stages.

“Werther” has to be one of the saddest and most intense operas ever created. Massenet based his work on Goethe’s novel, “The Sorrows of Young Werther”, which details the lamentations of a depressed poet.
When “Werther” premièred in the Opera House in October 2015, it had not been performed in Hungary for 30 years. It is risky as a production because “Werther” could all too easily be tediously depressing if the fragile Werther’s torment and lovelorn situation were his alone.
But what makes the opera so compelling and spellbinding is that the four main characters all have a nobility, a sensitivity and they too suffer anguish to varying degrees.
Werther and Charlotte’s downward spiral progresses through the seasons as the opera commences full of summer hope and ends in the harsh chill and despair of a winter blizzard. This isn’t a story of vengeance or brutality, no one is evil or violent and it is for this reason the audience is drawn into an opera that is all too real with genuinely likeable characters.
The opera also touches on sentiments that exist within so many of us. The most salient question “Werther” throws out is why is timing such an enemy when it comes to love?
Even if the outcome is not death, the themes of love whether realised too late or love for a forbidden person are as relevant and painful today as when Massenet composed his masterpiece.
The tragic love duet between the dying Werther and heartbroken Charlotte is sweet and savage combined, whispering hope yet moaning despair. Werther spends his last moments with the person he loved more than life itself. Sensational but so heartbreaking.

“Le Corsaire” ballet premières on the Opera House stage on 21 April and great anticipation surrounds this long-awaited production. Literally translated as ‘The pirate’, “Le Corsaire” is a dramatic sweeping story full of danger, shipwreck and the perils and soaring highs of love with an uplifting finale.
The production is an immense collaborative effort as choreography credits after Marius Petipa and Konstantin Sergeyev are jointly shared between Anna Maria Holmes and Tamás Solymosi, while the composition credits belong to Adolphe Adam, Pyotr Oldenburgskiy, Cesare Pugni, Leo Delibes and Riccardo Drigo.
With a list of such top quality names, you can be assured the première will be something akin to perfection.
There exist many versions of “Le Corsaire”, and Anna-Marie Holmes has great experience to bring to this première. She choreographed her own version for the Boston Ballet, as well as staging a production for The English National Ballet several years ago.
In Budapest, with set designs by István Rózsa,“Le Corsaire” is set to be the glittering tiara of the season’s ballet productions.

“Cavalleria Rusticana” and “Pagliacci” only have three performance dates in April but these two short operas are unmissable. Masagni’s “Cavalleria Rusticana” is a classic tale of Sicilian love, betrayal and vengeance in one act, a concise sharp opera set on an Easter day.
Its power lies in the emotions that still resonate through contemporary society and its haunting musical score. “Cavalleria” is always paired with Leoncavallo’s “Pagliacci” where illusion and reality become horribly distorted.
“Pagliacci” (clowns), set in the deep south of Italy, is a compact drama within a drama with similarly intense emotions as “Cavalleria Rusticana”: love, betrayal, vengeance and tragedy.
There is a darkness, a sinister dimension to clowns; beneath the veneer of comedy flow dark undercurrents that Leoncavallo weaves into his opera.
As the opera unfolds, the troupe leader, Pagliaccio (Canio), is whipped up into a jealous frenzy due to his unfaithful wife Nedda (or Columbina as her stage persona).
Canio’s mournful aria “Vesti la giubba” as he paints on the mask of his Pagliaccio persona sets the mood for the inevitable tragedy. As the action grows ever more dramatic, the village audience is swept away by the circus troupe’s wonderful acting, not realising that a very real darkness is unfurling under the night sky.
The final closing line is a violent shock back to the real world: “La commedia è finita! – The comedy is finished!” 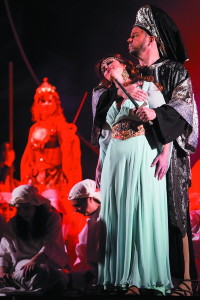 Verdi’s rich and dramatic “Nabucco” is perhaps the opera that ignited the composer’s career. Based on historical events surrounding the troubles of the Jews as they are exiled from their country by King Nabucco, the opera contains wondrous music and an intense romantic storyline.
The audiences of Verdi’s time were so enamoured by this production that at the composer’s funeral, the crowds in the streets sang “Va, pensiero, sull’ali dorate”, echoing the most famous piece of music from “Nabucco” which is “Chorus of the Hebrew Slaves”.
Literally it translates as “Fly, thought, on golden wings”. This encapsulates everything taking place on the opera and ballet stages; flying, soaring ambition and ideas, aiming to reach the chandelier through the immense power and beauty of song or dance.
And at once, we are also a bit closer to heaven itself.

“Cavalleria Rusticana and Pagliacci”
Until 17 April

Tickets and information: www.opera.hu/programme
(There are alternate casts for each production, so check the website for details)