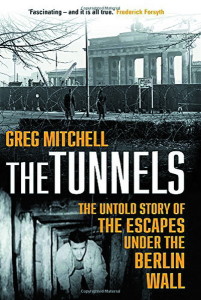 No matter that East German leader Walter Ulbricht dubbed the wall built on August 13, 1961 to divide Berlin as an “anti-Fascist protection barrier”. To the free world it was an affront to human dignity and freedom, and entrapped East Berliners promptly began to attempt to go over it, through it or, eventually, under it.

Early escape attempts involved fake IDs, people smuggled under car seats and dashboards, 200-yard swims under rifle fire across the Spree river, jumps from windows onto mattresses, sprints through the death strip and other brave attempts, sometimes with fatal results.
Oddly, perhaps, many of those who turned to tunnelling after the Wall was strengthened were West Berliners, usually students, who dug into the East, rather than vice-versa. Needless to say, whichever way they went it was dangerous work with rudimentary equipment, an added hazard being the many East German Stasi informers spying on them.
Author Greg Mitchell is described by his publisher as “a critically acclaimed history writer”, He does not speak German so he needed assistance to use long-secret but now-declassified documents from the Stasi archives, the John F. Kennedy Presidential Library and the Library of Congress.
Mitchell also found and interviewed many of those involved in the tunnelling, and he says all his reprinted conversations and information are as-were because he never extrapolated.
A good proportion of his gripping book centres on two tunnels in particular. US television networks NBC and CBS heard about the secret projects, and raced to be first to air a spectacular “inside tunnel” special. The money the networks gave to some of the diggers in return for exclusive rights to film the escapes both helped and hindered.
US President Kennedy and Secretary of State Dean Rusk, wary of anything that might raise Cold War tensions and force a military confrontation with the Soviets, manoeuvred to kill both documentaries. The US administration considered its politically controversial interference with press freedom to be acceptable at a time when the communists were delivering nuclear weapons to Cuba and there was a real threat of nuclear war.
In the event, the “CBS tunnel” was betrayed by a Stasi informer, as identified by Mitchell. NBC’s documentary was delayed but eventually aired to wide interest.
Mitchell reveals the young East Berlin mother who escaped with her baby on hands and knees through the crude underground passage, eventually divorcing her husband and marrying a tunneller.
One tunneller was an engineer who later worked on the English Channel tunnel. Among the diggers and helpers were a legendary German cyclist and an American student from Stanford. Another had already served four years in the East German gulag.
There is plenty more in this rich story.