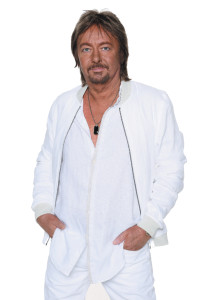 Chris Norman was the man who sang the Smokie hits when the band found fame in the 1970s. Now he has searched out the old Smokie musical scores in his house and sent them to Budapest in preparation for performing them with the Óbuda Danubia orchestra on April 22.
Smokie’s successes include “Living Next Door to Alice”, “If You Think You Know How to Love Me” and “Don’t Play Your Rock ‘n’ Roll to Me”. When Norman performs his hits in Tüskecsarnok, it will be with his own band partly aided by the Óbuda Danubia Symphonic Orchestra.
It will be the first time the songs have been given a public airing with an orchestra as large as the Óbuda Danubia, which shows 40-plus musicians on its website. Norman had a top 10 US hit in 1978 with “Stumblin’ In”, a duet with Suzi Quatro. He left Smokie in the early 1980s to start his solo career, and “Midnight Lady” became a hit throughout Europe in 1986. His popularity has been greatest in Germany, where his hits in the late 1980s included “No Arms Can Ever Hold You”, “Sarah (You Take My Breath Away)” and “Broken Heroes”. In 2015 he released the solo album “Crossover”.
On a personal note, Norman has five children and four grandchildren. His eldest son died in a car accident and he said he would never get over it. But his wife of 47 years and the whole family was brought even closer by the tragedy, which he said made it possible to live with the pain in their hearts.