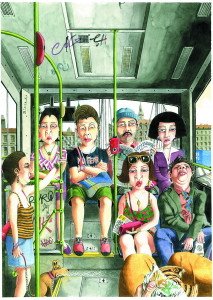 Artist Marcus Goldson’s paintings cover a lot of ground when it comes to Budapest icons and character. Whether it’s the Gellért Baths or Keleti Railway Station, grumpy commuters or chain-smoking old ladies in fur coats, he captures the characters and scenes with flair, humour and a touch of irony.

Goldson has been resident in Budapest for almost 25 years, and his work hints at his familiarity with and affection for the city. Born and raised in Kenya, Goldson later trained in sculpture at Winchester School of Art in England. He moved to Budapest in 1993, close on the heels of his Hungarian wife.
Although the vast majority of his work is now centred on Budapest, he has also spent time in Cairo and Damascus, among others. “My work is like a visual diary, a passage through time, a reflection of where I am,” Goldson says.
But he says he didn’t always paint people and places. In fact before moving to Budapest he was working with an entirely different medium. “If you had asked me in 1990 if I’d be doing this, I would have laughed myself to death. I was doing huge abstract metal sculptures,” he says.
He switched from sculpture to painting, believing that it would be easier to sell painted works. Initially he wasn’t sure where or how to begin, but the streets of Budapest provided plenty of inspiration.
“I walked the streets and thought, wow, this place is kind of exotic, so I drew people or whatever it is in my sketchbooks not knowing what to do with them. Eventually I scanned them and sold a lot and decided to sell them as postcards.” He also started a company in the process.
While his work is sometimes compared with artists such as Beryl Cook, known for her portrayal of nightlife and bar scenes, he doesn’t identify with any specific genre or style. He considers himself a draftsman or illustrator more than a painter, and admires Englishman David Hockney as well as various sculptors. 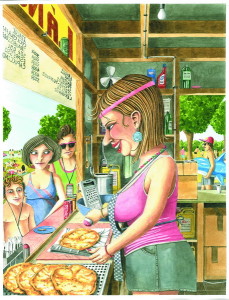 All of his characters and scenarios are drawn from real life, such as the five ladies in “Wolfpack”. It’s hard not to be a bit mesmerised by these old-timers, who while looking somewhat otherworldly, are also familiar to all of us who have spent time in Budapest.
“I draw characters, quirky people like you would have anywhere, but with some traditional values thrown in. For example the five ladies in the metro, I saw them on the metro. They were actually wearing leopard print, for me it was a shock. So I sketched them,” he says.
A key element to his work is humour. “I like humour and I think a lot of art lacks it. I like it in my work, simple as that.”
The small details in the scene are equally important – a certain type of beer or a packet of local cigarettes for example, can contribute to the portrayal of the character and the sense of time and place.
Many of his works contain trademark Hungarian objects, whether it’s Modiano’s familiar smoking man with monocle hanging on the wall of a bar, a lángos being doused in salt, or a copy of Népszabadság being intently read by a worker.
Like any city, Budapest has of course changed over time. Goldson says the capital is a very different place now from how he remembers it in the 1990s, and his work has evolved to reflect that. “At the time (when I first came), Budapest felt like a provincial city. It doesn’t feel that way now. One thing I liked is that families lived in the centre before. It’s changed, especially in the past six years.”
With the exponential rise in tourism to Hungary in the past ten years, tourists have become part of the landscape too, at least in the city centre.
“There are a lot more foreigners and the city is more cosmopolitan now, not so many visible Hungarian stereotypes, they’ve moved out. So I paint foreigners in Budapest as well.” 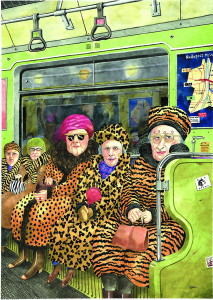 I wondered at the reaction of locals, who can sometimes be sensitive about how their small and globally relatively unknown country is seen by outsiders.
“Generally people either love it or hate it. It’s a grey area. Generally I’ve had positive feedback, although sometimes people will say you make us look like … shrivelled-up cucumbers, but that’s not at all the point. Hungarians have got a big sense of humour, also pretty sophisticated sense of humour,” he says.
In addition to his own work, Goldson works on commissions for magazines such as “Forbes” and “Time Out”.
Budapest provides the perfect surroundings for being an artist, Goldson says, and he has no plans to leave any time soon. “I like it here – the quality of life, it’s much more sedate. You have time to walk or bike around town. I would never live in London again after this.”
Goldson’s work can be seen at http://www.marcusgoldson.co.uk/ and can be purchased in many bookshops and cafes around Budapest.