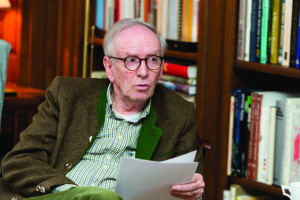 Many US voters are hoping that the election of Donald Trump as President will finally see their opinion being represented in politics. The Hungarian government has also hailed this new era. The fact that there is a new tone in international relations since his arrival can be seen in security policy aspects as well. Many of the disagreements are caused by the term “Political Correctness” – a phrase that threatens diplomatic relations with a rupture test. What does someone who not only taught but also lived in international relations and diplomacy think about these dangerous trends? Prof. Dr. Reinhard Bettzuege talks to The Budapest Times about the phenomenon of “Political Correctness”, the new challenges in diplomacy, multilateralism and why the European Union is more important than ever.

Dr. Bettzuege, during your diplomatic and academic career you have dealt intensively with trans-Atlantic relations. What do you think about Trump’s policy in relation to Europe and the future of NATO?

The early weeks of his office were not very promising for Europe and NATO, to express myself diplomatically. Trump is striving for no less than to shake and delete the world order as we have known it since the end of World War II. The president of the European Council, Donald Tusk, lamented in his letter to the member states why 70 years of American foreign policy and rational foreign policy, I would add, have to be questioned. This is just as regrettable as dangerous. This is the reason why the EU invited the American President to one of the EU summits: to understand his motivations.
Nobody should be fooled into believing that a weakened European Union, or even its fall, would result in more sovereignty for its member states. The consequence would much more be a fatal dependence on the three main actors of world politics: the USA, China and Russia. This cannot be the best interest of the Europeans. In politics it’s always easier to destroy something tried and tested than think about a better new method. This is why all over in Europe we are experiencing with a lot of worry that the values and political structures, which have been successfully defining our politics in Europe and over the Atlantic, are questioned without a plan or perspective.

What do you suggest the Europeans do in this situation?

In this era of emerging mistrust we should keep our cool and rely on our own strength. Isn’t Europe the destination for millions of people, are they not all dreaming about the European dream? Why is that so? Because Europe is a more peaceful and friendlier continent. I am surrounded by young students and I know how perfectly well the young people know what they have in Europe. This is why at the Brexit referendum the majority of young people voted for staying in Europe. They are looking at Europe not only as the place where they are safe but also the place of their values, rules and traditions; they already have a European identity.
Mrs Merkel said that Europeans have their fate in their own hand. This is true. We should make a virtue out of necessity and confront all those, within Europe too, who think that the time has come when they can reject human rights, the division of powers, the rule of law and the freedom of media.  At the meeting of the EU government leaders in Malta in February the call of unity was timely and the realisation that Europe (finally) has to clarify its role in the world for itself. Since it’s still a fact that cannot be replaced by any alternative facts:  Europe will only house 4% of the global population by the middle of our century. At the beginning of the 19th century this ratio was almost 20%.
If someone believes that a looser union of European national states could be successful in mastering the challenges of the 21st century, he will be sourly disappointed and has to take the political responsibility for a depending, dependent Europe. Whoever believes today that multilateralism has served its time and advocates for bilateral national relations instead is behaving in a politically short-sighted way, which is irresponsible as well. Even George W. Bush learned the lesson when during his second term he had to return from the unilateral practices (the war in Iraq, for example) to the multilateral solutions. Trump will learn similar lessons, I am sure about that. In the meantime the US Vice-President, Mike Pence, and the US Secretary of State, Rex Tillerson, both expressed their strong interest in a united Europe, which is a ray of light.

You have been the German representative in NATO for five years. How do you see NATO’s future? Also in relation to Donald Trump, who described NATO as “obsolete” during his campaign.

The introduction of the North Atlantic Treaty laid the foundations of the world order after World War II. It’s clearly said in the treaty that this community is based on the principles of democracy, freedom of the individual and the rule of law. Furthermore, the Transatlantic Pledge was made to unite efforts for the preservation of peace and security. Taking into consideration the threats of Islamic terror, violations of international law in the South China Sea and Putin’s aggressive policy with his neighbours, we can see that the existence of NATO is vital.
However, the point that Trump and many before him criticise is right: Europeans are not doing enough for the strengthening of relations. It’s a scandal that has only been realised, even by Mrs. Merkel that the defence efforts have to be  increased significantly, namely to the agreed target of 2% of gross domestic product. In the meantime Trump agreed to participate at the NATO summit on 26-27 May in Taormina, Italy, and he has not repeated the word “obsolete” about NATO ever since; he rather talked about his “strong support”. Furthermore, he will be joining the G20 meeting in Hamburg in July, where he has to explain what he means by “global governance”.

Many people celebrate Trump because of his promise to put an end to “Political Correctness”. What does the term mean to you, as a diplomat and political scientist? 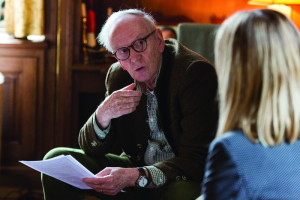 Trump said in his campaign: “I refuse to be politically correct.” Actually the term means to use a non-discriminative language. However, the concept is more than that. Political Correctness is for me first of all: predictability. It’s also trusting that the agreed commitments will be fulfilled, that contracts such as the North American Free Trade Agreement will not be updated as a surprise, that international law will not be questioned or compromised and the global partners will not be discredited or whole countries will not be made subject to general condemnation.
Political Correctness is measured by how we treat people who think differently; this is why American courts turned down Trump’s immigration decree for a reason. I am sure that it’s against the constitution. It proves that healthy democracy rules in the USA that this happened and that thousands went on the streets to protest against it. Even a lot of Republicans were looking at the White House with horror. This is why I would not bet on Trump serving his entire term.

Did you notice any changes in international diplomacy after Trump entered office?

The most important change for me is that most Europeans, except for a few exceptions, have seen Trump’s questioning of the present world order as a wake-up call and know that unity is needed more than ever now. I also see a return to the values that constitute our democracy and a readiness to fight for this more vigorously than before.

You have represented Germany in some European countries as an ambassador. I suppose that the work of diplomats is not really simple in restless times such as today. What would be your biggest challenge if you were the German ambassador in the USA right now?

You should not overestimate the role of ambassadors. They are only representing the policies made at home. This is easier for them when they can base their arguments on European unity in their host countries. What would I do? Inform people, lead discussions, organise discussion events all over the country, present at universities, organise business meetings, engage myself with the public, encourage parliamentary meetings, involve foundations, non-governmental organisations and think-tanks – so I would do everything that diplomacy can do, including using the social media. In diplomacy you have to convince other people. The reference of 70 good transatlantic years should be helpful in that.
As a German ambassador I would not even pay attention to rejecting Trump’s adventurous accusations according to which Germany is just using the EU as a tool for reaching its own interests. Germany, in my opinion, is by far the largest net contributor to the income of this community, on the other hand the country has called back a number of representatives from the European Parliament in order that they are not overrepresented when compared to France or Great Britain. Trump would never think that the reason why we are doing this is that we do not want a German Europe, but we want to become a European Germany.
I would also vehemently oppose Trump’s allegations that Germany is trying to manipulate the currencies. Germany is criticising the expansive policy of the European Central Bank, which is weakening the euro, as strongly as any country. The ECB is supranational and independent anyway. Furthermore, I would contradict his reproaches that we do not buy American cars. Are all the Fords and Opels that you see people driving here not American cars? I would also point out to him that the Germany automotive industry is securing 33,000 jobs in the USA.
As for his mockery of the reception of refugees, this is an act of solidarity with politically persecuted and war refugees. Mrs. Merkel is cleaning the mess that irresponsible US policy with Iraq and Syria caused.
Finally I would quote President of Germany Joachim Gauck, who was forced to live most of his life in a dictatorship and this is why he said: Freedom and democracy are the decisive political values of our times.

Are American diplomats having a hard time right now all around the world?

Yes, it’s bad for them. The fact that more than a thousand ambassadors wrote to the State Department after the regulations about entering the country were published, says a lot. This is a unique event in US history.

From this summer semester you will be teaching the “Diplomatic case studies” seminar at the Central European University (CEU). The university has been a government target in the campaign against the US billionaire and philanthropist with Hungarian origins, George Soros. What do you think about the possible threat by Fidesz to dissolve the CEU?

I can only refer to the open letter written by Michael Ignatieff, the CEU rector, pointing out that the CEU has proven itself with a quarter of a century of academic education.  CEU is a Hungarian institution that is recognised internationally, not only in Central Europe. It accommodates students from 117 countries, 20% of whom are Hungarians. CEU employs around 700 Hungarian citizens and spends almost HUF 10 billion in Hungary each year. It can refer to 14,000 graduates all over the world. The rector pointed out in his open letter that CEU was able to work together with every Hungarian government in a positive way in the past 25 years. I cannot imagine that any Hungarian government would like to change this tradition.