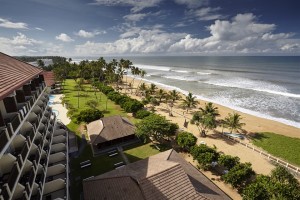 Slowly, deliberately, a Sri Lankan man is climbing the long thin trunk of a palm tree. Ropes have been tied around the trunk to give him hand-holds and foot-holds but it is still a perilous ascent. When he reaches the top, parallel double ropes have been laid across to neighbouring trees so that he can pass from treetop to treetop, one rope for walking on, the other for holding. 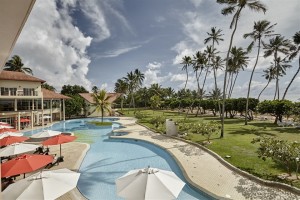 The man is a tapper collecting sap to make toddy, or palm wine. He must be about 30 metres up, and from aloft he looks down on the Indian Ocean, where the small wooden boats of the village fishermen are out to sea catching the seafood that we will eat for lunch and dinner. 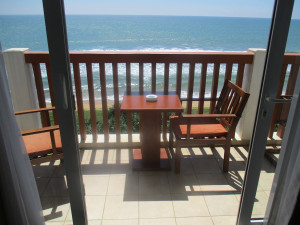 Mingling with the mainly German and Chinese tourists on the beach is a Sri Lankan with a small monkey and what seems to be a mid-size boa constrictor. He is hoping to make some money from snapshots. 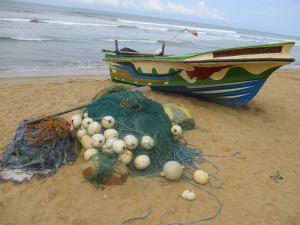 Resorts tend to be mini-worlds of their own, suiting certain tourists who like to be closeted away in comfort, insulated somewhat from the local life of the foreign land they have chosen to visit. And here, at the Turyaa Kalutara resort on the west coast of Sri Lanka, a metal gate and a couple of security guards at the front entrance make sure that the tourists aren’t bothered inside by any entrepreneurial locals. 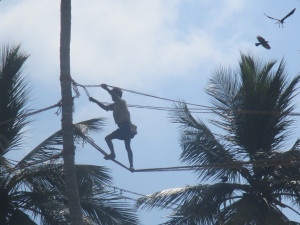 But round the back, where the beach is, with our tree climber, monkey-snake man and fishermen out in the ocean, we don’t feel that we are missing out too much on the local colour. Turyaa Kalutara is right next to the Indian Ocean, and the fence between the sand and the resort is draped with colourful clothing on offer by the local village women.

This is our first visit to Sri Lanka in 43 years – since December 1973! – and one of the never-forgotten memories from that time is of the train ride from Colombo down the coast to Galle. The rails were so close to the ocean that spray sometimes came through the carriage windows. The line cut across palm tree-fringed rivers and lagoons. What an incredible ride it was. 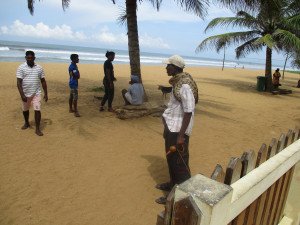 Turyaa Kalutara, 37 kilometres south of Colombo, hadn’t been built then. Now it occupies 2.5 hectares of ocean-front land, a five-star resort with 199 rooms all facing the sea. On entry, the entire reception area is open to the air, giving that fresh-breeze-just-in-from-Africa-feeling. One of the resort’s two pools is right next to the reception, and a poolside bar. 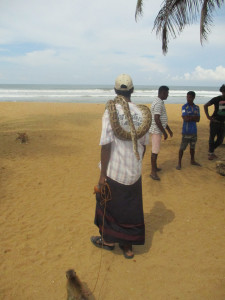 At 4am 70 cooking staff begin the task of feeding the guests throughout the day at the resort’s multiple restaurants. The fresh seafood will turn up in fish salad, cuttlefish salad and prawn salad. Apart from the pools, the beach and the ocean, Turyaa Kalutara has a games room, library, nightclub, gym and croquet lawn to keep everyone busy. Two weeks is an average stay and six weeks is a long stay. An Englishman who has visited 14 times has had a cocktail named in his honour.

Day and night, tide after tide, is the constant rhythmic beat of the waves on the beach, just metres away.  Does the non-stop sound become tiresome, we ask one of the staff? “Of course not,” he laughs. “I couldn’t work without it.”

Next in this Sri Lanka travel series: inland to Kandy