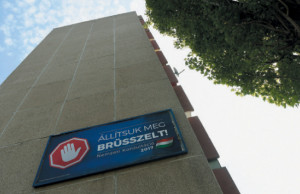 There is a growing discontent in the air in Budapest. Something that goes beyond the normal level of human complaint. What I’m hearing now is more systemic, more worrying.

A friend announced recently that he planned to leave Hungary. To emigrate. I was surprised. I asked why. Why now? He said his friends are polarised, on one side or the other. Lines are being drawn. Sides are being chosen. His career has been stymied. He’s been branded by those in power as being pro-Jewish, one who surrounds himself with liberals. He feels he’s left with no other option. I heard strains of the Hollywood cliché: You’ll never work in this town again.
Another told me of hearing friends of their 14-year-old daughter talk about how bad Brussels is, about how dangerous it is for Hungary to be a member of the EU, about how we need to detach ourselves. When they asked the teens why they thought this, they said they’d read the billboards, they’d seen the advertisements, they’d heard the government speak. They are 14. They are our future. And whatever they are being taught in school apparently doesn’t involve critical thinking.
A third, a lecturer at a higher-level institution, told me of a student walking into the classroom with twenty minutes to go in the tenth of a twelve-lesson series. This was his first time to come to class. He wanted to write the four essay assignments he’d missed because he needed to pass the class. In twenty minutes? No. He expected my friend to stay that afternoon and supervise. To work, for free, to accommodate his schedule.
When the friend said no, the student accused him of being inflexible. He was a sportsman. These lessons were interfering with his play. They needed to be more accommodating. That my friend had already extended the deadlines for each assignment to accommodate the litany of excuses from a body of students who didn’t seem to understand the concept of deadlines was neither here nor there. After a tirade of abuse, the student left, promising to take it further.
Another lecturer-friend told me how their bonus (an extra payment on top of their pittance of a salary) was tied to the students’ appraisal of their teaching. I was gobsmacked. So, if you are lax in your teaching, flexible with your deadlines, kind in your marking, you will make more money but your students will be ill-prepared for the world that awaits them. But if you are rigorous in your teaching, steadfast in your deadlines and critical in your marking, you lose out. The students will gain but you will lose.
Why are teachers in Hungary undervalued so? They are responsible for producing the minds that will govern tomorrow. Education is a crucial part of shaping our future. Why is it being undermined? The new laws affecting CEU are high-profile but the problems appear to run right through the education system.
But the most disturbing conversation I’ve had in recent weeks struck me as encapsulating the palpable frustration of a society that seems to be imploding. There’s a building in Buda where one tenant has been intimidating his neighbours for years. House meetings are no longer attended because of the abuse he hurls at the other tenants. He has sabotaged plans to improve the building so it’s decaying.
It’s a small house. Many of the tenants are retired couples who have lived there since it was first built. They’re good people, another friend told me. They want little more than a safe environment in which to live. One free of harassment. A community that works together for a common cause.
They tried hiring external companies to manage the upkeep of the building and the common cost each of them pays towards its maintenance. In the past seven years, five such firms have quit because of this one man and his bullying behaviour. Now, the word is out. The monthly common cost has spiralled upwards because each new company wants an exorbitant fee to manage this one tenant.
His life is consumed with filing lawsuits against the tenants’ association, petty suits that don’t stand up in court. And while he might lose, it costs the other tenants money to defend themselves. Pleas to the courts to recognise what he is doing have gone unheeded. The courts have seen his record. They know what he’s at. But they keep hearing him out.
Time is being wasted. Reputations are being ruined. General funds are being depleted. And his attacks are not limited to his fellow tenants. When individually they hire someone to work on their flats or to fix, say, lights in the hallways, he harasses these workers, too. Like the management companies, they also require what amounts to “danger money” to work there.
He has physically assaulted one tenant, verbally abused the others. The police were once called to forcibly remove him from the management company’s office. His verbal rants have been documented on video, to little avail. The nightmare continues.
The courts have let them down. The property management companies are reluctant to get involved and charge exorbitant prices to do so.  The legal system isn’t helping. And a group of people who simply want to live peaceably with their neighbours is caught between the proverbial rock and a hard place.
As long as he’s in residence, their flats won’t sell. So, they can’t move. With little option but to stay and persevere, they’re forced to live in the shadow of a blustering bully who picks on the vulnerable, stands in the way of development and is seemingly determined to ruin his own little fiefdom.
These people are at their wits’ end. If you’re a lawyer, and have a suggestion, let me know. If you’re a tenant with experience of handling such a situation, please comment. If you can help at all, get in touch. Doing nothing shouldn’t be the last resort.

Mary Murphy is a freelance writer and public speaker working on Plan B. Just in case. Read more at www.unpackingmybottomdrawer.com