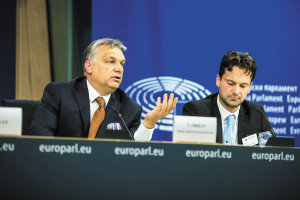 The Hungarian government’s dedication to the European Union is “unquestionable” but in many respects the government is dissatisfied with the operations of the EU; allegations suggesting that recent Hungarian legislation is aimed at closing down Budapest’s Central European University are unfounded; and Hungary will use its own resources and meet “challenges of the European demographic crisis” without immigrants: these were the main focus points of Prime Minister Viktor Orbán’s speech at a plenary session of the European Parliament at the end of April.

The prime minister went to Brussels to partake in a debate focusing on the amendment of Hungary’s higher education law, the planned amendment of the law on civil organisations, the automatic detention of asylum-seekers, media-pluralism and the independence of the judiciary.
Orbán argued that the law on higher education was designed to introduce uniform laws for all universities in the country. He insisted that the new rules eliminate an opportunity for “speculation or abuse”, and instead ensure transparency and remove “privileges enjoyed so far”.
Orbán said that as the leader of an EU member state, he was obliged to ensure that “European and Hungarian universities suffer no drawbacks compared to their competitors”.
Manfred Weber, group leader of the European People’s Party – of which Orbán’s Fidesz is a member –, asked the premier to consider changes as recommended by the European Commission concerning the contested legislation. He argued that Hungarian students have enjoyed the benefits of the CEU’s dual degrees over the past 25 years, and he expressed incomprehension at the Hungarian government’s aiming to remove that advantage.
Academic freedom is a fundamental European value, which should be retained and preserved, Weber said, and added that the CEU was doing nothing other than its job.
In response to attacks about the National Consultation, Orbán told the session that his government is critical of the EU because it wants to correct existing faults and reform the EU.
The only way to restore citizens’ trust is by making every effort to correct mistakes and this also requires clearly identifying them, Orbán said. He called for a “fair, open debate” and asked members of the EP “to give a critical approach to prejudices against Hungary”, and apply “equal standards” in matters concerning the country.
The Hungarian government is fully aware that EU membership goes not only with rights but with responsibilities, Orbán said, adding that the level of support towards the EU is high in Hungary.
He said Hungary complies with the Dublin agreement, the EU rule that a migrant’s claim must be processed in the country they first arrive in, for which he said the country deserved recognition rather than criticism. In his rebuttal to remarks by MEPs, Orbán said that by fulfilling its international obligations, Hungary was protecting Germany, Austria and Sweden, arguing that migrants crossing Hungary’s border only wanted to pass through and move on towards western Europe.
He said Hungary’s stance on migration was clear: illegal migration needs to be stopped and refugees need to be separated from economic migrants outside the EU’s borders. The EU should help those in need by providing help at the point where it is needed, the prime minister argued.
He said the plan to redistribute migrants across Europe on the basis of mandatory quotas had failed, adding that such a rule had not been implemented by countries that do not go against the EU’s policies, either. The quota plan was a bad idea that needed to be ditched and a new solution must be found.
He insisted that “some MEPs” advocate migration “as the right answer” to current challenges, ensuring benefits to the bloc. Hungary’s government and Hungarian society, however, thought that labour and demographic problems could be resolved using the country’s own resources. The government used “a considerable share of its GDP” to support families to meet those challenges “without immigration”.
The prime minister said those who allowed the entry of migrants into Europe needed to consider the likelihood that their children and grandchildren would “grow up in a different world”. He said migration brought two different cultures face to face with one another: one which believes in the separation of religion and politics and another that views the two as inseparable. Contrary to what most in Europe believe, these two cultures would not mix.
Hungary asks that Europe should not press for such a world, Orbán added. He said migration was one of the most important questions in the EU, one which he said strained the bloc, stressing, however, that the community needed to be kept together.
Speaking about EU funding given to Hungary, Orbán said all European Union member countries benefit from the bloc’s cohesion policy, arguing that the money Hungary receives is not a donation. Therefore, the EU must not expect Hungary “to keep our mouth shut”. Even the net contributors are benefactors of cohesion policy, Orbán insisted.
“We have abolished duties and opened our markets, giving way to the free flow of capital,” despite still suffering from a lack of capital after the communist era. He told MEPs that they must not treat Hungarians as if “you were giving us presents and we were indebted to you”.
EU First Vice-President Frans Timmermans said in the debate that the Hungarian government’s campaign dubbed “Let’s Stop Brussels” included false and misleading facts. The European Commission wants to clarify these issues “on the basis of hard facts”, he added.
Gianni Pittella, head of the European Socialists and Democrats, rejected Orbán’s remarks suggesting that “the EP represents a financial speculator” and insisted that the body is to promote the expectations of Hungarian students who do not wish to be stripped of an excellent university.
On another subject, Pittella said Hungary, through rejecting plans to resettle migrants, behaved as if it were outside the EU. He warned that shared benefits should be accompanied by shared burdens and shared obligations of coexistence.
Liberal leader Guy Verhofstadt said the Hungarian government goes against fundamental principles of the EU through its measures concerning civil groups, the critical press or building a wall along the border. He suggested that Orbán saw an enemy everywhere, whether it is the energy sector, civil society or the academic community.
Verhofstadt suggested the Hungarian prime minister evoked economic protectionism, extreme patriotism or building an illiberal state, which he said had all characterised Hungary’s communist past.

Orbán described Hungarian-born US financier George Soros as an „outstanding international speculator“ at a press conference following the plenary session.Soros is a „speculator“ who „destroyed the lives of tens of millions of people“ when he „broke“ the British pound and attacked other currencies, Orbán said. „He made a profit from millions of people becoming poor.“ Not long ago, Soros had been fined several hundred million forints because he speculated against the largest Hungarian financial institution and „he was within an ace of succeeding“. Orbán said it was unfortunate that the top leaders of the European Union hold talks with a speculator as if it was the most natural thing.

The European Commission has launched an infringement procedure against Hungary over the recent amendments to its higher education law tightening rules governing the operations of foreign universities in the country. Critics of the law have said it puts the operations of Budapest‘s Central European University under threat.The spokesperson said the EC has sent Hungary a letter of formal notice on the matter, which officially launches the procedure. The EC said in a statement released on Wednesday that it considered the national consultation questionaire to be based on „several factually incorrect or highly misleading claims and allegations“.

CEU said in a statement that Orbán had claimed, referring to a letter written by CEU President-Rector Michael Ignatieff to the students and teachers, that Ignatieff is not worried that CEU, operating in Budapest, may be closed down. “This is false. Ignatieff assured the CEU community in that letter that the university will continue operating under any circumstances,” the statement said. “This does not mean, however, that the survival of the university in Hungary is not under threat. “The CEU said it was also false that the new law abolishes privileges and loopholes and distributes rights across universities in an equal fashion. “For weeks now, we have been asking the government to name the specific privileges possessed in the past by CEU and the rights given now to all Hungarian universities.“ Unfortunately, Orbán had failed to answer these questions again. CEU has worked hard to gain accreditation and issuing diplomas is not a privilege, the statement showed. “The measures claimed to benefit the Hungarian universities met with robust protest across the entire Hungarian education sector. This is because the new law and the way it was adopted shows disrespect to Hungarian higher education and to academic freedom.“