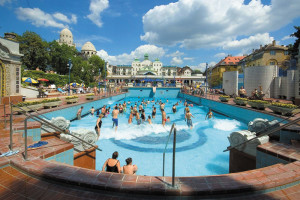 In Budapest, getting into hot water is a good thing – and there are plenty of great, beautiful, historic baths at which to do it, notably the grand dame of them all, the Gellért Hotel and Spa, and the Rudas, the latter originating from a 16th-century Turkish bath. The waters are not just hot but a cocktail of natural minerals that promote wellness and healing. Andrew L. Urban reports.

A boy and a girl with webbed feet are hugging and looking down at the fountain below them where three dragon heads are dispensing 40-degree water into the spa pool. The dragons have massive moustaches of calcium, accumulated over nearly a century (since 1918) of performing their task.
This is my last soak before a light lunch (excellent Greek salad) at table 30, a table set in its own balcony overlooking the Gellért’s indoor swimming pool – a cool 27 degrees – the blue water a stark contrast to the sandy colours of the subtly carved columns and beige patterned tiles of the surrounding walkway, where swimmers rest in easy chairs, just watching other people. It’s included in the entry fee.
Above us is the full-length skylight and the daylight streams in – especially when the sun shines. I see a man swimming with his wife (I trust) piggybacking lazily on his back in the sparkling water. The skylights are a feature throughout, bringing in daylight and connecting the elaborate, secession-style interior to the outside world.
Looking the other way from my table, huge windows look out on the summer terrace and its surrounds, where the wave pool thrills kids from May to October, as it did me many years ago.
This area around the swimming pool is my favourite part of the Gellért spa complex, at least in winter, when it’s at its most spectacular. Surely it’s the grandest indoor pool in Budapest.
It would be enough to warrant a visit even without the thermal pools that help improve joints, circulation and a few other ailments including neuralgia and discus hernia.
Of those pools, my favourite is the 36C bath, with two permanent water-gushing fountains that massage your back, at just the right pressure. There are dozens of hands-on massages available in the curtained cubicles nearby, ranging from relaxing to rehabilitating.
Once you leave the thermal pool area for the steam and dry sauna rooms, it’s strictly functional, with little or no decor.
The steam room is anonymous: no faces can be seen, only body shapes. But with eyes closed in bliss, I see nothing.
Finding my way around was made easier by the helpful and courteous staff; I got lost twice.
The dry saunas – there are four in all – offer ever hotter rooms. There is a door near the hottest ones that says “no entry” – I guess it’s hell in there.
But after a swim and a sauna or two, up on the balcony above the pool, surrounded by ferns and the ambiance of relaxation, it’s almost heavenly. 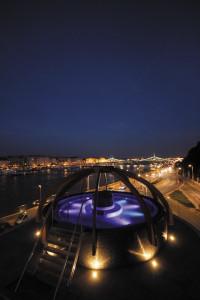 The lighting is dim. Steam fills the large room under the domed ceiling, which is punctured by glowing lights, plain or red or blue. It is supported by large arches. The water is a steady 36C, as it has been for centuries. Men soak in small groups or alone, as they have done for centuries (not the same men), most of them wearing clinical white loin cloths – or nothing. Sitting on the underwater ledge near me, three men converse in hushed tones, solving the world’s problems. This is the thermal pool on the site of the original Turkish bath built in the 16th century, with four smaller pools around it, one in each corner, each a different temperature, from 32C to 42C.
Openings from this room lead to saunas and steam rooms. Men are constantly coming and going, but slowly. The air of calm is enhanced by the cloister-like columns around the central bathing pool. The warmth of the water encourages relaxation.
It’s a men-only Wednesday at the Rudas, as it is every other weekday except Tuesdays, which are women only, but on weekends it’s mixed bathing. In the other section of the building towards the wellness centre, I come across men and women in the precinct of the swimming pool, which is set at 29C and contains a 50-50 mix of ordinary tap water and thermal water from the hot spring.
Here as at the Gellért, you’ll need a good sense of direction. The route from the timber-lined changing cabins to the facilities can be confusing, but staff are on hand to help. I pass several massage cubicles, and have to double back to put swimwear on before crossing the lobby towards the swimming pool. There is none of the splashing and boisterousness of a general public swimming pool here, this is serious. Men and women swim quietly to and fro. A staff member sits at a poolside table to keep an eye on things, ensure safety.
On the mezzanine above, lounge chairs welcome swimmers to rest, with views on both sides: on one side is the Danube and Pest view, on the other, the rocky face of the Gellért Hill, almost within touching distance. (The Rudas is one tram stop from the Gellért.) From the outside, the Rudas doesn’t look like a thermal pool complex; it could be a low-key learning institution, unlike the Gellért, whose grand hotel facade is an icon of Budapest.
But there is a novel new addition at the Rudas, up on the second floor roof: a round, open-air thermal pool at 36C, which is the best place to be on a sunny winter’s day, with the air temperature a cool 2C. This is when you get the best experience of it, with the wonderful views across the Danube.
I climb up the steps from the freezing roof terrace (called a sun terrace in summer) to the edge of the steaming pool and step inside, lowering myself into a spot with a view. A young couple are in silent meditation, foreheads touching, eyes closed. Across from them a small group of couples are debating where to go for lunch: the rather fancy Rudas restaurant just below the pool, or the less fancy ground floor buffet … or …
But I have to concentrate: where am I going next? There are so many options, but I settle for the 36C pool on the ground floor just under the roof pool, with bubbling jets. Then I remember the sauna world, and it beckons. The first one I see is the aroma sauna with plain glass walls. Nobody inside, so I take a seat on the wooden bench, the faint aroma of herbs pleasing to the senses, the temperature a comfortable 45C. There are hotter ones if you want to cook. My other favourite dry sauna (also 45C) is small, with just three timber armchairs facing an exposed rock wall that is battered with age, a piece of raw nature in the midst of a tiled world.
Next time I go to a Budapest spa bath, I’ll take a friend so we can solve the world’s problems while soaking ourselves to health.