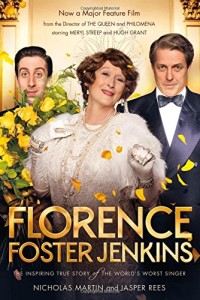 “If she loves music, why does she do this,” a sufferer asked after hearing one of Florence Foster Jenkins’ catastrophic singing performances.  Jenkins herself put it another way: “People may say that I couldn’t sing. But no one can say that I didn’t sing.”

Nicholas Martin’s fascinating book about her life (1868-1944) is subtitled “The Inspiring True Story of the World’s Worst Singer”. Last year a film about Jenkins, starring Meryl Streep and Hugh Grant, brought the singer to wider attention. Jasper Rees’ screenplay of the film forms the latter part of the book.

Before Streep’s film, Jenkins’ “fame” rested mostly on a mere nine audio recordings, produced at her own expense and not released until 1954, a decade after her death. These became played later by people in the know for a joke at parties, and the Jenkins legend slowly began to spread.

Born in Pennsylvania to wealthy parents, Florence was a talented young pianist who discovered a passion for public performance when she was just seven years old.

Her life was thrown into turmoil when she eloped in 1885 with Frank Jenkins, a man twice her age. The marriage proved a disaster, not least due to his syphilis. To survive their separation, Florence gave piano lessons.

Many young singers owed their start to her but she too yearned to perform and began giving regular recitals that quickly attracted a cult following. These performances mostly took place at her apartment and in small clubs, and were not open to the general public, or critics.

This leads to the big question: how aware was she of her shortcomings? Martin’s detailed digging can only speculate that her singing never rose above the mediocre and steadily deteriorated with age.

Things reached a stupendous climax when, by public demand, she performed at age 76 in America’s most hallowed performance venue, Carnegie Hall, in 1944. Raucous laughter and wretched reviews followed, and she died a month later.

Jenkins may have lacked pitch, rhythm or tone but, perversely, it was this that eventually elevated her as America’s best-known and least-talented soprano. If she could have actually sung with a modicum of musicality, she probably would have been forgotten by now.