Budapest to Catania, Sicily, is a quick one hour and 45 minutes flying, taking us from the landlocked city to the shore of the Mediterranean. It is a long enough flight to be Somewhere Different and short enough to survive the budget airline knees-under-the-chin experience. 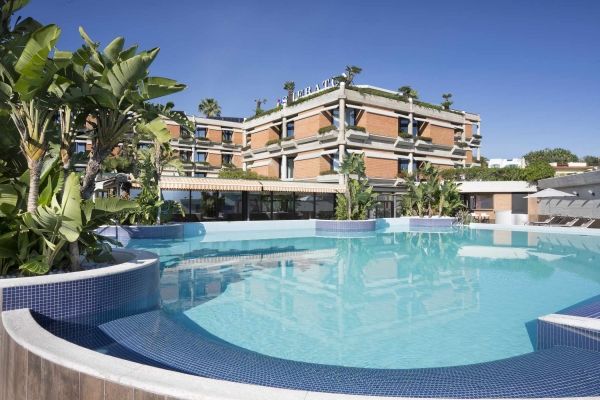 Outside Catania Airport, Mount Etna is a dominant presence. Europe’s tallest active volcano is in an almost constant state of threat and today it is emitting a fair amount of smoke. Fortunately we have booked accommodation (something we often leave to chance), so we won’t find that everywhere is full and we have to sleep in a field with Etna bubbling away in the background.

The hotel, Four Points by Sheraton Catania Hotel and Conference Centre, will send a car to the airport if required and then it is a 45-minute drive through the centro of Catania and about six kilometres up the coast to an area called Aci Castello, home to a Norman castle. Here we find the hotel amidst a touristy resort strip of pizzerias, ristorantes, caffés, solariums and holiday apartments.

The air is clear and sunny and the environment feels like that of a relaxed seaside holiday centre. Four Points by Sheraton is right across the road from the coast of the Ionian Sea. From our fourth-floor, top-floor room we look down on the hotel pool, from where there is a short tunnel under the road to the hotel’s private beach area. 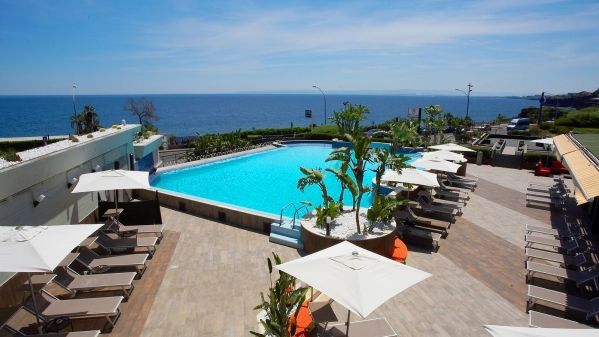 Here, at the latter, sun worshippers can choose between stretching out on the wooden deck built on scaffolding over the water, on the grassed area or on the black rocks. Canoeists, yachts, speedboats and bigger ferries or cruise ships sail past the loungers.

But first comes checking in, and the otherwise-standard hotel reception is nicely adorned by a magnificently ornate Sicilian carretto, the horse- or donkey-drawn carts beautifully carved and painted all over; primary-colour works of art on wheels. 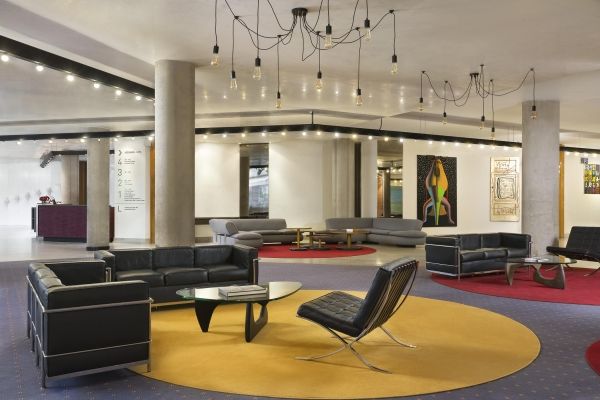 These were introduced to the island by the ancient Greeks and reached the height of their popularity in the 1920s, when many thousand were on the island. Nowadays they have to be admired mostly in museums and during folklore events, or perhaps in hotel receptions.

At the back of the lobby is the Il Melograno bar, which is the place for a quickish snack of Sicilian fish and chips, which comes with squid and shrimps, or a Bellini Burger with deep-fried aubergine, a salad or perhaps a grilled ham and cheese sandwich with French fries. Plus a local brew or three.

By the bar are two glass lifts to the rooms and these look into an indoor “jungly” area with hanging plants trailing down all four floors to a ground-floor pool and rocks. If Tarzan were in residence and the lift was a bit slow and he wanted his breakfast fast, all that dangling greenery could come in handy…

Our Deluxe room is one of the hotel’s 169 rooms and suites. It has a feature we have not seen anywhere before, with one wall covered in Ecocarat, described as a revolutionary Japanese natural and eco-friendly ceramic that keeps the air clean and promotes good health. 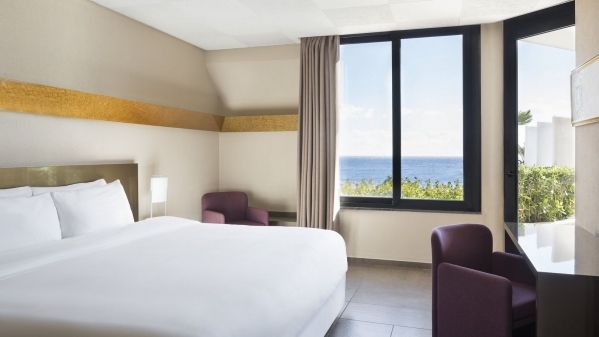 A few square metres of this apparently inhibit the spread of molds and mites, and the causes of allergies, as well as reducing unpleasant odours. It is said to relieve the day’s fatigue.

As, like half the other guests, we have a private balcony with a captivating view of the pool and sea, and the door is continually open to the bracing air, it is difficult to say if we receive extra benefit from our health-conscious room. It certainly isn’t cramped though, at about 30 square metres and with one of the biggest beds we have seen; a king-size-plus cosy cocoon.

Almost directly below us, the salt-water outdoor pool has its own Fucsia Pool Bar, which is open from June to September, and sunbathers can stay well supplied with cocktails, refreshing drinks such as Sicilian granitas or a freshly squeezed orange juice, ice-cream, sandwiches, light summer dishes and salads. 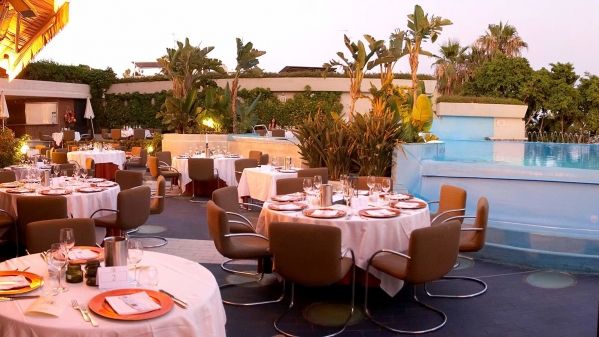 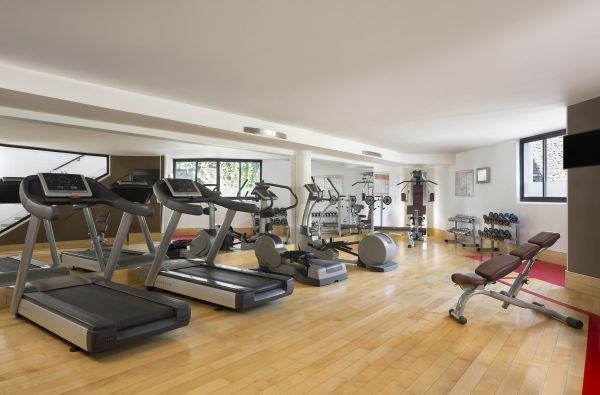 The beauty area has four cosy cabins where ancient techniques and essential oils of almond are designed to dissolve all tensions. Guests can have a massage or experience tailor-made beauty with Maria Galland body- and skin-care treatments. There is also a hair salon.

The fitness centre was designed by Core Performance and is equipped with Technogym machines. Outside, the hotel has its own tennis court.

As the hotel name implies, it is an innovative combination of business and leisure and the fully-equipped business centre includes 15 flexible meeting rooms and a 400-square-metre outdoor space, for all kinds of events. As we pass through, a bunch of Allianz bods have got their heads down plotting strategies, and another room has hair all over the floor, looking like a massacre has just taken place. Turns out it was a hair-cutting course. 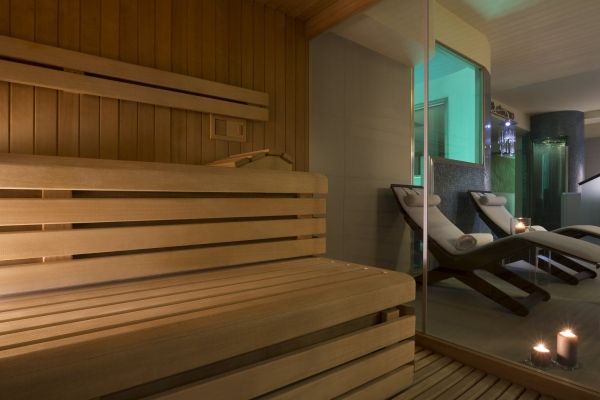 In the evening, a room with a huge screen shows the European Championship final between Real Madrid and the Turin team, Juventus. The Italian viewers are chagrined to see their team capitulate 4-1, all except one traitorous local, who supports Inter Milan and is thus well satisfied to see Juventus humbled.

Finally, we indulge in Il Timo restaurant, where chef Saverio Piazza fortuitously takes a personal interest in us and shows us around the Four Points by Sheraton vegetable garden behind the hotel, the starting point for some of the creative Mediterranean dishes cooked up by him and his team.

Piazzo started out as a dishwasher at 11 years of age and now has been a chef for decades, following his father and grandfather. The long hours don’t worry him because “My job is fantastic”. He prepares us a wonderful salad with fresh-that-day anchovies followed by some exquisite strawberries.

For wine lovers, the hotel has an array of Italian wines with a special focus on local Sicilian tipples from the three valleys of the island, in addition to international labels selected by Starwood Wines of the World.

Another fabulous concoction from the Il Timo kitchen involves squid, prawn, rice and tuna breast, after which we can only say, “Our congratulations to the chef”.