Trump, Merkel, Trudeau, May, Macron, Abe and Gentiloni have just left town and the excitement is over In Taormina, Sicily. Life may be returning to normal after the two-day G7 conference but the buzz is still palpable among the staff in the NH Collection hotel. Their entire 63 rooms were filled by Prime Minister of Japan Shinzo Abe and his summit team.

The NH Collection hotel was one of the select few in Taormina to host one of the seven world leaders. Abe and the First Lady naturally occupied the Presidential Suite with its private hot tub, separate living room and extra-large bathroom.

The PM apparently was an eager consumer of the hotel’s signature lemon granita, an icy concoction with a tangy revitalising taste. Sicily is famous for its lemons, which are described as an integral part of the island’s landscape and culture.

We arrive on the first day of the reopening of the hotel after the leaders and limos have returned home. An extra-large Japanese “Rising Sun” flag stills hangs over the revolving doorway from the narrow street and a security X-ray machine has done its job and is waiting to be removed from the lobby.

We are greeted at reception not with a lemon granita but with a complimentary grapefruit juice. Interestingly, as we sip away in the lobby, the hotel swimming pool is immediately overhead, and the six windows in the bottom of the pool mean that guests enjoying a cocktail or liqueur from the lobby bar below can watch the swimmers overhead.

Even if there are no swimmers for the moment, the sun shines through the open centre of the hotel and into the pool water, creating a pleasant effect of rippling shadows around the large lobby and reception area.

Abe and his team also took over the NH Collection hotel’s entire conference facilities. When not G7-ing, the Japanese were able to enjoy a convivial time in the open-air restaurant and bar on the seventh-floor roof, named the Rosso Collection Terrace.

This is apparently the highest point of all Taormina, a small but fascinating tourist town on Sicily’s east coast, and many of the NH hotel rooms have terraces and balconies with views over the typical terracotta rooftops and coastline.

Each morning, early-bird guests have an uninterrupted view of the actual rising sun appearing over the Italian mainland, just kilometres away across the Ionian Sea.

When we take to the roof-top in the evening, the weather is pleasant enough at the tail-end of May (the month, not the British Prime Minister) to sit outside and take in the sight of the grand, sweeping bays below. It is a fine Mediterranean evening to top off a pleasantly sunny Sicilian day, though not hot enough yet to convince Trump about global warming.

Taormina is spectacularly perched on the side of a mountain, and since the opening of its first hotel in 1874 the town has become a prime resort for some Sicilian dolce vita, with a charming atmosphere to be enjoyed on relaxing walks through the central pedestrian areas. 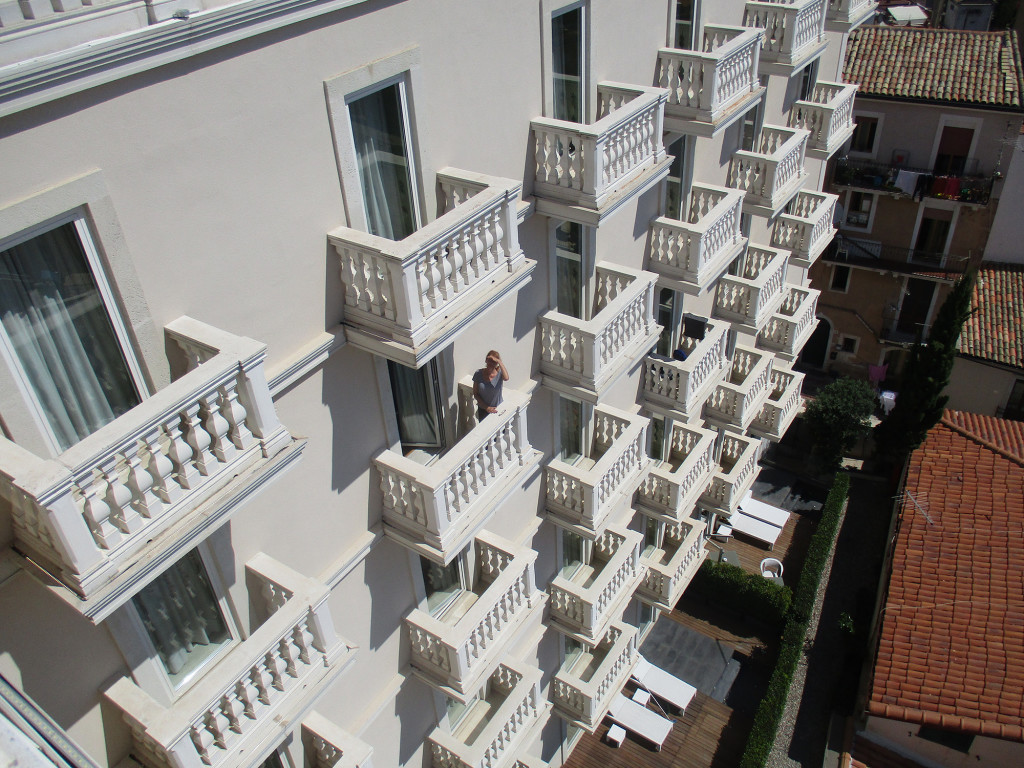 Hungarians visiting the National Gallery in Budapest may already have an idea what to expect from the 1905 painting “Ruins of Greek Theatre at Taormina” by Tivadar Csontváry Kosztka (1853-1919), whose journeys around Europe took in Sicily.

“Ruins of Greek Theatre at Taormina” (1905) by Tivadar Csontváry Kosztka

Many other artistic types have found the town a fine place to refresh their creative juices. After Northern Europeans discovered its delights, it became a must-visit place on the Grand Tour, the traditional trip of Europe undertaken by mainly upper-class European young men of sufficient means and rank.

NH Collection hotel Taormina is a little bit uphill from the bustle of the main corso but only five minutes walk away. Guests can relax in the sauna or Hammam and work out in the fitness room.

Breakfast is prepared fresh each morning, with an emphasis on gluten-free and healthy fare for a balanced, start to the day. The buffet has a wide variety of fresh fruit juices, pastries, cold cuts, cheeses, fruit, yogurt and breads, and hot dishes can be made to order. The restaurant serves Sicilian specialties and Italian cuisine.

NH Hotel Group is now one of the 25 largest chains in the world and operates hundreds of hotels across Europe, America, Africa, and Asia. Within the Premium hotels segment, NH Collection has hotels in the main capital cities of Europe and Latin America, in 13 countries.

On their way from Catania Airport to Taormina and back again, the G7 leaders pass Mount Etna, one of the most active volcanoes in the world. Perhaps it is a reminder of Mount Fuji and of home for Abe, Mrs Abe, the Japanese First, Second and Third Ministers, and their whole G7 entourage. 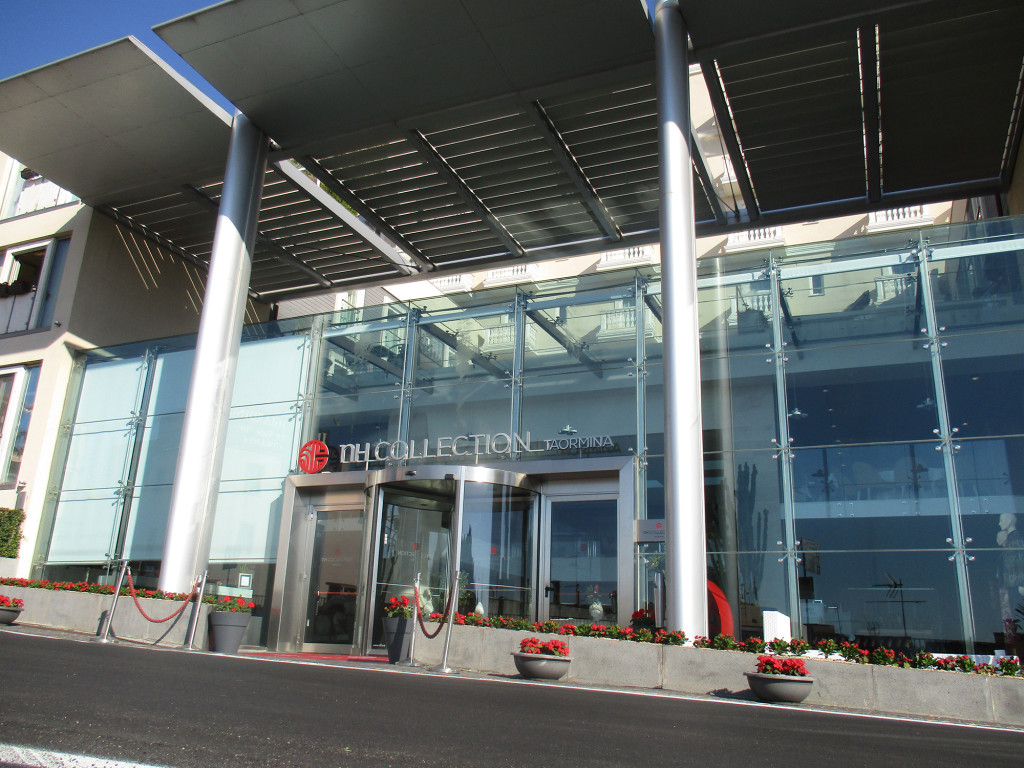 “Ruins of Greek Theatre at Taormina” (1905) by Tivadar Csontváry Kosztka