“Location, location, location” is the mantra of the real estate agent, their number one rulewhen listing the three things to remember while choosing a property. At Hotel Bristol Wien, we discover, they have this in spades, as the saying goes. 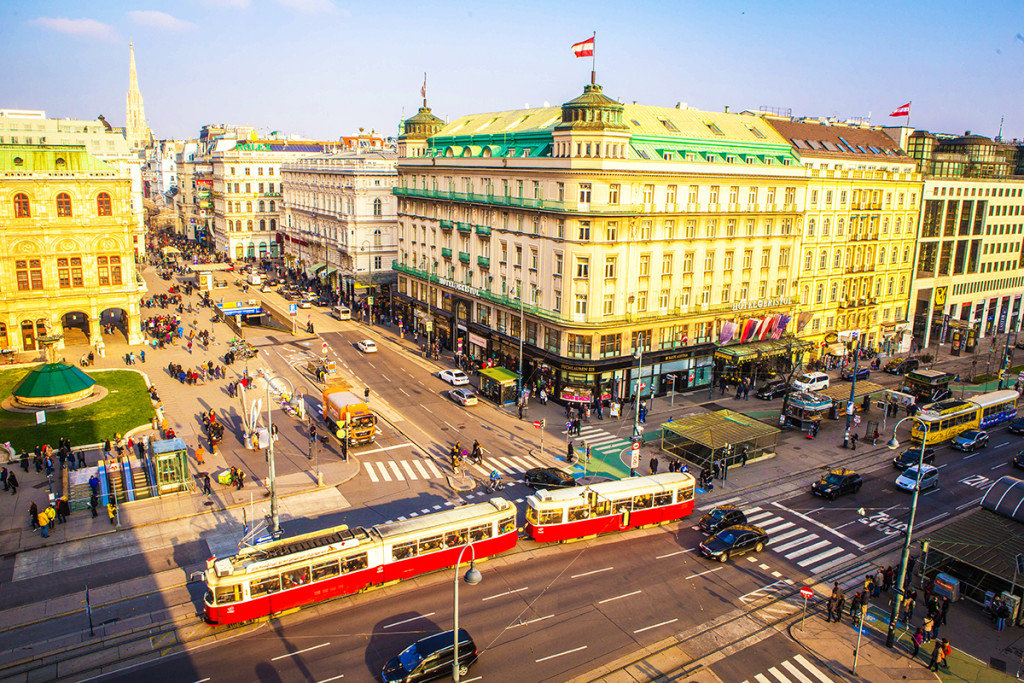 Location number one:Hotel Bristol is on Vienna’s Ringstrasse, one of the world’s outstanding boulevards and home to many of Austria’s most important buildings, such as the Parliament, Neue Burg (Imperial Palace), Rathaus (City Hall), Burgtheatre (National Theatre) and more, including …

Location number two: the hotel is the immediate neighbour of another of these Ringstrasse buildings, the Neo-Renaissance-style Wiener Staatsoper (Vienna State Opera), easily one of the most-visited sights in the entire city.

Location number three: Hotel Bristol is on the corner of Ringstrasse and Kaerntner Strasse, which is considered to be the most famous shopping street in central Vienna. Home to many stylish flagship stores of international companies, it is a popular pedestrian zone and directly connects the Ringstrasse with Stephansdom (St. Stephen’s Cathedral), another of the city’s most recognisable symbols.

Hotel Bristol Wien opened on June 26, 1892, and is named after the west England city. Bristol’s population of 66,000 in 1801 quintupled during the 19th century thanks to new industry and growing commerce. Bristol has been an important English seaport for more than a thousand years and was the town from where many expeditions put out to sea. 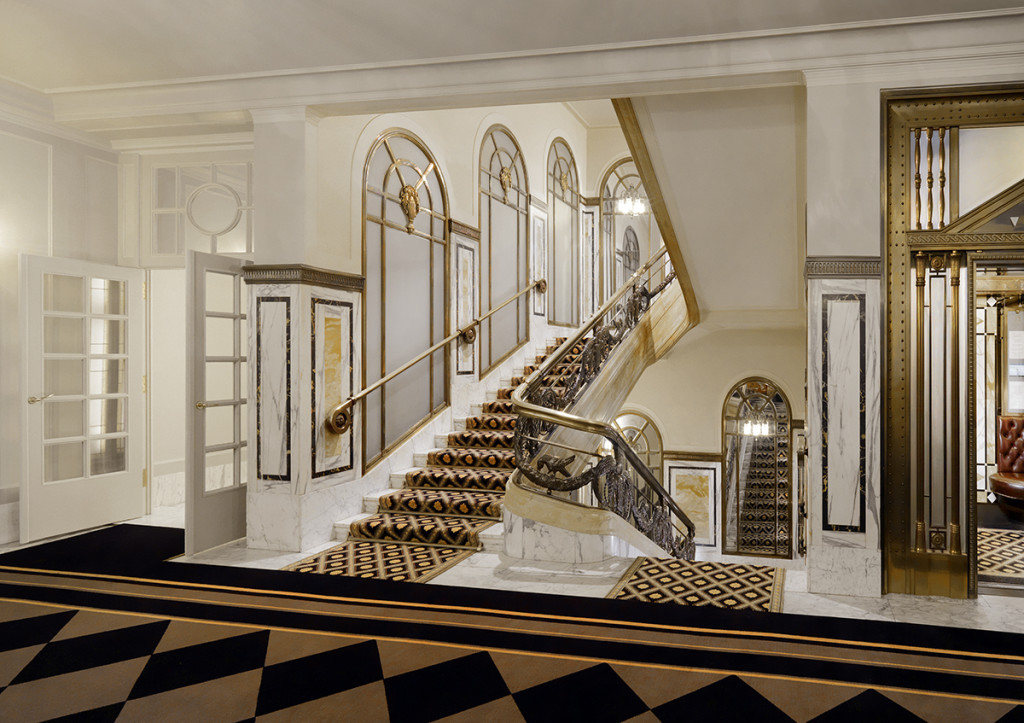 It was a go-ahead place, though perhaps most of its citizens were unaware of the use of the name for a luxury hotel hundreds of miles away in the Austrian capital. The motto Virtute et Industria (Virtue and industriousness) can be read above the hotel’s revolving entrance door; and is the same motto that decorates the emblem of England’s Bristol.

And luxury it truly was. Agard’s “Guide to Austria” described the hotel as “the residence for European and American society, all rooms with modern comfort and latest technology”. It boasted the first elevator in a hotel in Vienna. This was a time when electricity and telephones were setting new standards in hotels. Fresh drinking water had been piped into the city since the 1870s and now motor taxis were starting to appear outside on the Ringstrasse.

As a leading and glorious fin de siècle establishment, the Bristol quickly became a popular meeting point for Viennese society and business people. The Opera House across the street and other concert halls in the vicinity made it a favourite residence of internationally famous composers, musicians and artists. 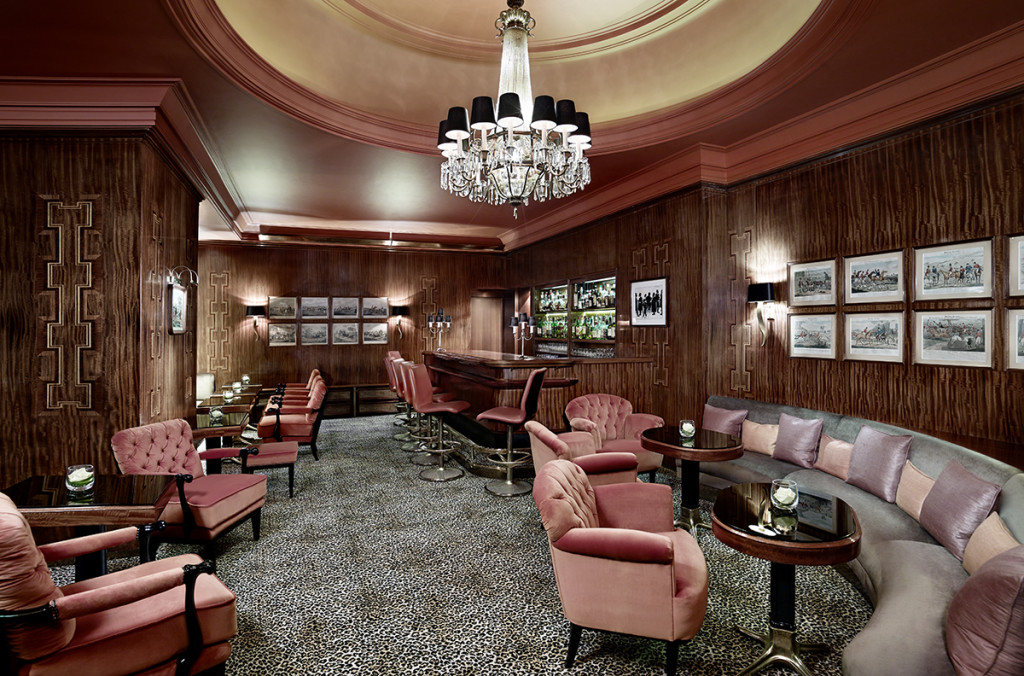 The hotel’s guestbook is a “Who’s Who” of international royalty and nobility, politics and the arts. In 1894, Russian composer and pianist Anton Rubinstein opened the guestbook (he died in November that same year; no connection, we are sure). Among the some 500 entries in the first guestbook are illustrious names such as US President Theodore Roosevelt (1858-1919), crowned heads such as Spanish and English kings, singing stars including Australian operatic soprano Dame Nellie Melba (1861-1931) and Italian operatic tenor Enrico Caruso(1873-1921), and composers such as Italy’s Pietro Mascagni (1863-1945) and America’s George Gershwin (1898-1937). 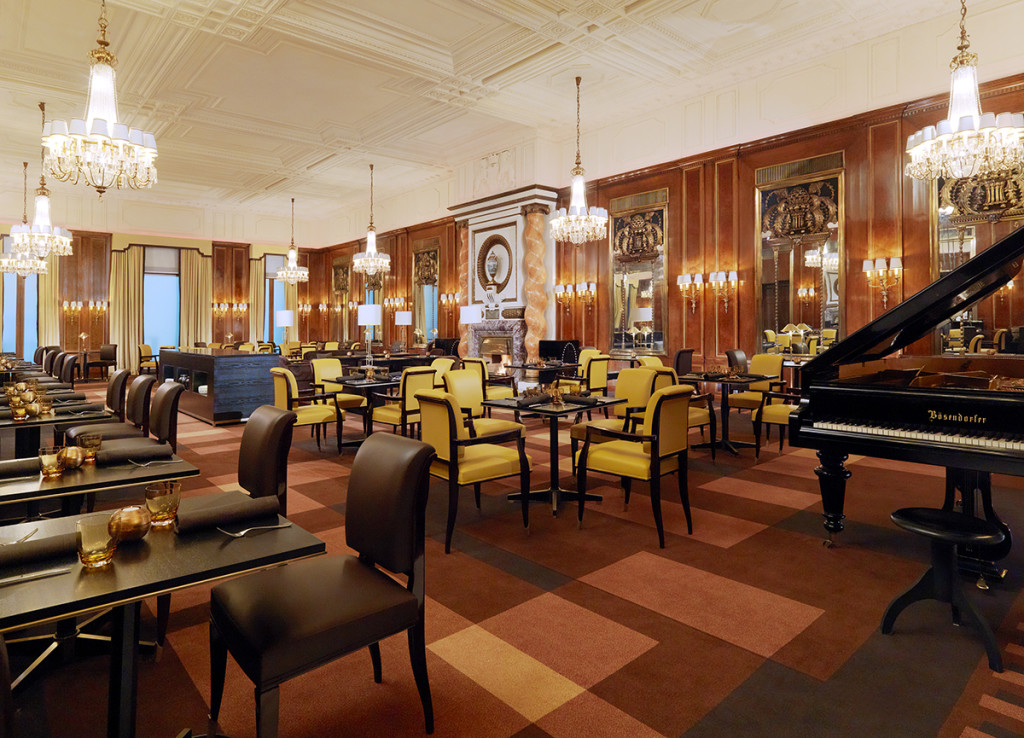 Caruso had a suite of four rooms in 1907 but the story goes that although he was world-renowned, critics judged his performance at the Vienna State Opera as rather disappointing. True Viennese patriots, they apparently favoured Austrian tenor Leo Slezak.

It was at the Bristol that writer Felix Salten negotiated the contract that made his novel “Bambi, a Life in the Woods” (1923) a world bestseller, and later a Walt Disney animated film.

A quick glance at the guest list, then, reveals various kings, crown princes, dukes, counts and maharajas on the aristocratic side. Politically, presidents and prime ministers have descended on the art deco jewel.

From the artistic world have come Leonard Cohen, Leonard Bernstein, Woody Allen, Brigitte Bardot, Joan Baez, Maurice Chevalier and Richard Burton – and those are just among the As, Bs and Cs. 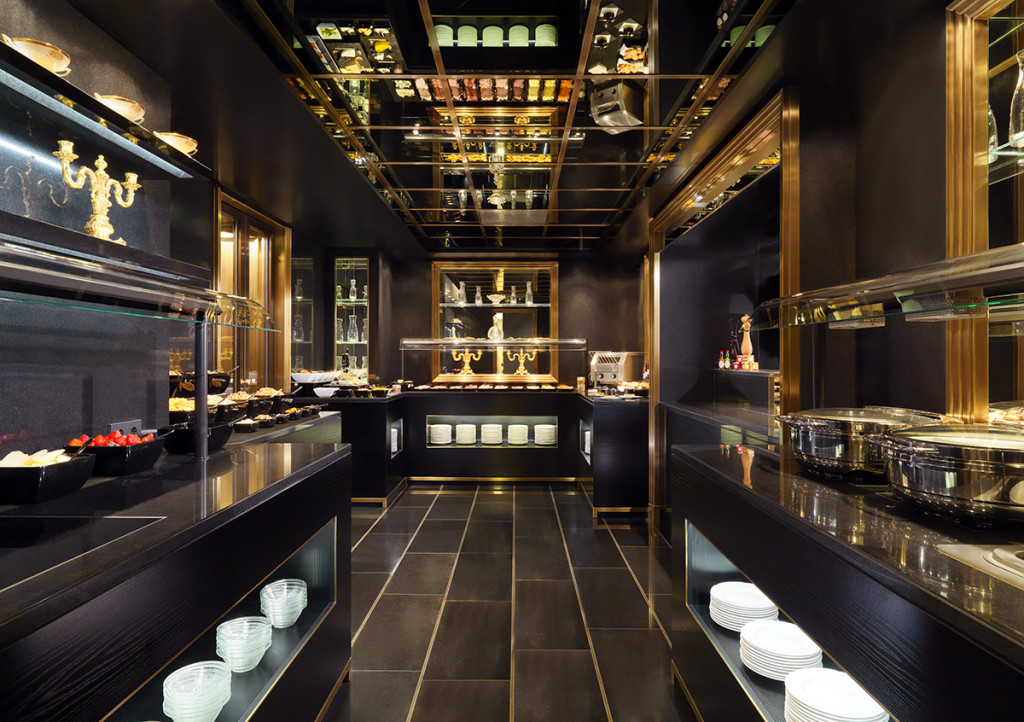 The Bristol’s vicinity to the Opera House sees rooms facing it named after famous composers and Opera House directors, thus guests reside in the “Gustav Mahler”, “Herbert von Karajan” and other rooms. Ours, number 270, is dedicated to Austrian conductor, composer and pianist Felix von Weingartner (1863-1942).

Roosevelt, US President from 1901-09, resided at the Hotel Bristol in 1910, from where he was driven to an audience with Emperor Francis Joseph I. At the Bristol he met the first woman awarded the Nobel Peace Prize (1905), Austrian-Bohemian pacifist and novelist Bertha von Suttner. 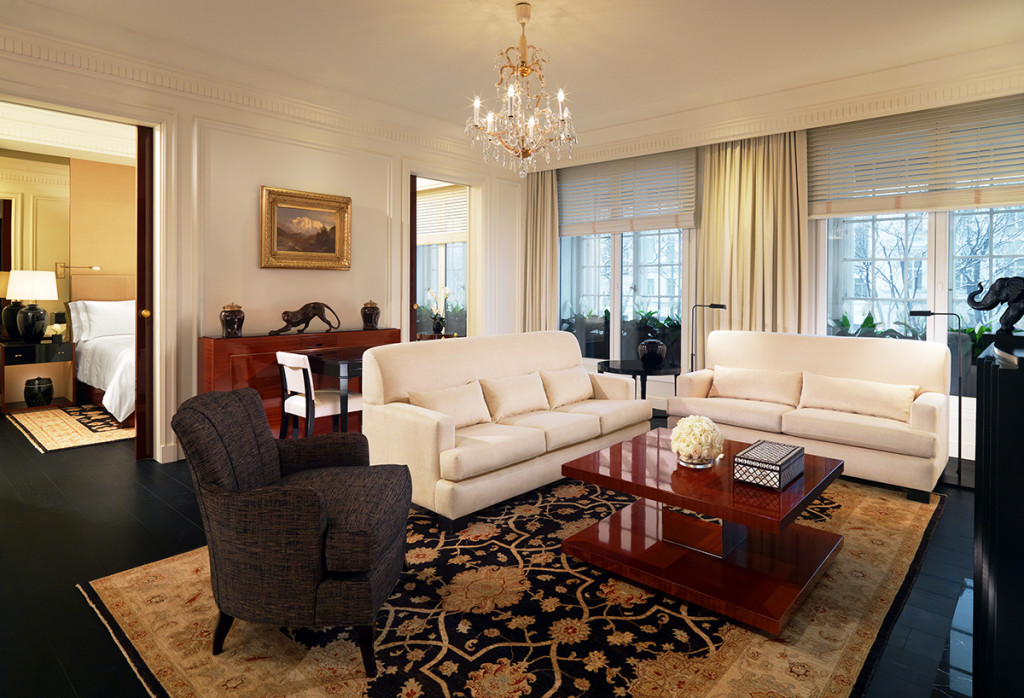 Russian virtuoso pianist, composer, and conductor Sergei Rachmaninoff (1873-1943) fled the Russian Revolution in 1918 to settle down in the United States. In 1926 he came to Vienna and lived at the Hotel Bristol. As ten years later he visited the hotel again, it is presumed he must have been satisfied.

President Sukarno (1901-1970) was the first President of Indonesia, serving in office from 1945 to 1967, and he celebrated his birthday at the Hotel Bristol in 1963 while visiting Vienna to consult famous physician Professor Fellinger.

King Ibn Saud (1876–1953) of Saudi Arabia was an earlier patient of Professor Fellinger, and was so impressed with the Hotel Bristol’s interiors that he had the clinic decorated with pieces of furniture from the hotel to brighten up the bleak hospital environment. Presumably they do things like that for kings. 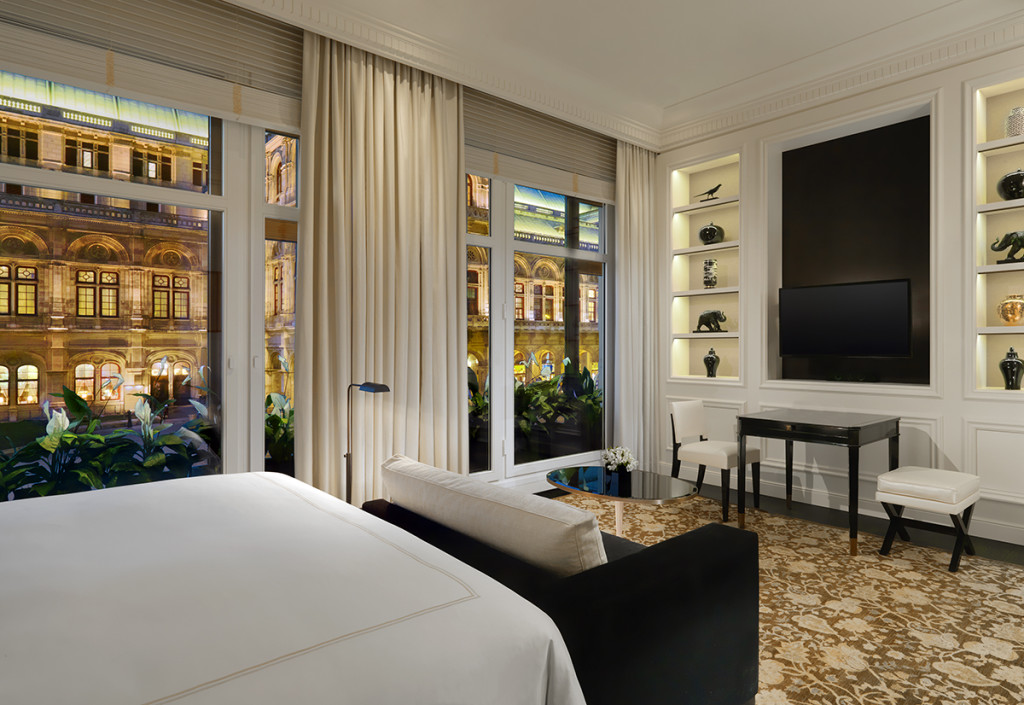 Probably these furnishings did not include the mid-18th century mahogany grandfather clock next to the reception, one of several antique pieces of furniture and paintings in the public areas of the hotel. Three metres high, the clock boasts moon phases, a calendar and a circle of planets. It displays Dutch inscriptions. The winged statue bearing an old man’s beard lifts an hour glass up into the air – an allegory of time.

Of the Bristol’s 150 rooms and suites – 140 in traditional style and 10 new – a standout is the Prince of Wales Suite. Its 260 square metres can be connected to two Deluxe Rooms to form a three-bedroom, 350-square-metre accommodation, one of Austria’s largest. Two separate entrances guarantee plenty of privacy, the main one boasting Calcutta and Nero Maquinia marble.

This entryway leading to the refined living room is still embellished with the golden ostrich featured in Prince Edward’s insignia. Antiques are found throughout and there is an eight-person dining table, office-salon, library and fitness studio with sauna and bathroom.

In 1935, Edward, Prince of Wales visited Vienna for the first time and lived at the Hotel Bristol. Every morning a bellboy was instructed to bring him a carnation for his buttonhole.

In 1936 he returned as King of England and, following his abdication and infamous marriage to divorced American Wallis Simpson in 1937, as Duke of Windsor. An ad in the “Neue Freie Presse” daily paper urged the Viennese to leave the couple alone, writing: “It is an absolute imperative to leave the Prince unmolested, to only treat him as distinctive foreigner, to absolutely refrain from staring at him or pursuing him!”

But it could not be avoided that throngs of people queued up at a phone booth in front of the Hotel Bristol exactly when the Duke’s arrival was expected. 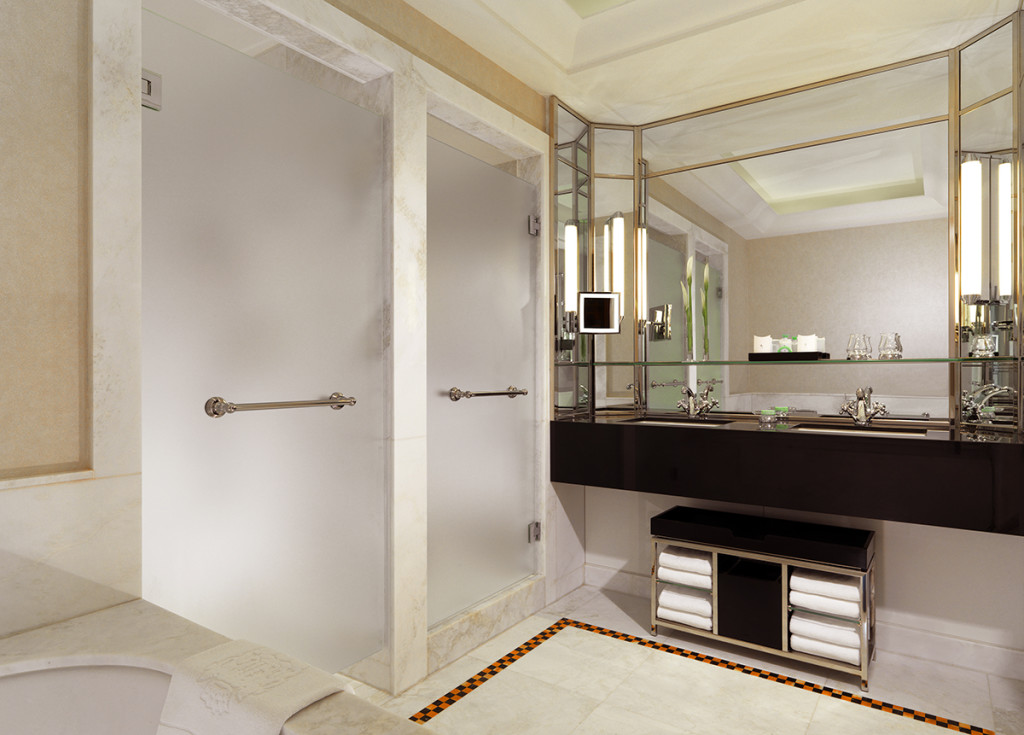 Enough of name-dropping, though it is undeniably fun. When The Budapest Times arrived at Hotel Bristol on June 26, 2017, it was the 125thbirthday of that opening on June 26, 1892. From The Bristol Lounge, serving Austrian delicacies and international cuisine, to Vienna’s first American Bar, the Bristol Bar with its musically themed cocktails, we find an overwhelmingly grand hotel doesn’t need to try to impress: it just comes naturally.

Everything is ship-shape and Bristol fashion, to use the English phrase meaning that is all in good and seamanlike order. Now a catchall expression, it originated when Bristol was the major west coast port of Britain and all its shipping was maintained in good order.

Our “Felix von Weingartner” room is on the side of the hotel facing the Opera House and its adjoining Herbert-von-Karajan-Platz. A large screen has been set up for free open-air, live opera broadcasts throughout summer, which not only the general public but also guests at the Bristol can enjoy from their rooms, champagne in hand (actual Opera House audiences must wait until intermission for their bubbly at the bar).

Noisy neighbours who play their music too loud will be first against the wall when the revolution comes, but, hey, this is the Vienna State Opera and they’re playing their favourite son, Mozart, so everything is absolutely fine. Pop another cork.