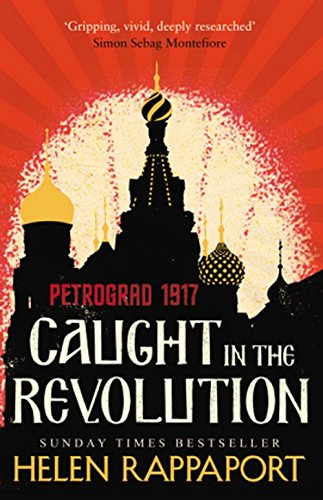 The centenary of the Russian Revolution in 1917 is an apposite time for a fresh book on this momentous event. Helen Rappaport, a British historian whose specialities include revolutionary Russia, gains a different perspective on this well-chronicled upheaval by using accounts of the foreign residents who saw history unfold on the volcanic and bloody streets.

To offer alternative insights from previously unknown sources, Rappaport searched extensively in forgotten books, through newspaper, library and radio archives, and among newly discovered diaries, letters home and other eyewitness material. Diplomats, businessmen, industrialists, nurses, doctors, aid workers, journalists, governesses and nannies were all among the expatriates who suffered and feared as they tried to stay safe in riotous Petrograd in 1917.

The Russian capital, now back to its original name of St. Petersburg, was a hungry, snowbound city of ice-locked canals in the arctic winter of 1916-17. Long silent queues of downcast women in raggedy clothing waited interminably outside almost empty shops for bread, milk, meat, potatoes or whatever might turn up.

Many of the men were on the front at war with Germany, and basic foodstuffs had quadrupled – or worse – in price since the start of the fighting. As winter bit harder, the queues grew longer and more resentful, with more and more talk of inefficiency and corruption in high places. Women were standing so long in the freezing temperatures that hypothermia set in. The unending privations fed a growing atmosphere of social disaffection.

The large and diverse foreign community was privileged and doing better, relatively speaking. Although Tsar Nicholas II had banned vodka sales in 1914 to control the legendary drunkenness of Russia’s largely peasant conscript army, the expatriate social whirl continued. If you had the right money you could still be served fine wines, champagne, whisky and other hard liquor in the cabinets privés of the best restaurants and hotels.

Entrepreneurial foreigners had established cotton and paper mills, shipyards, timber yards, sawmills and steelworks in Petrograd, and American journalist Negley Farson observed that these expats lived like feudal lords. They suffered too but they could send a maid to shiver in the food queues.

Rappaport and her rich trove of material bring us characters such as British ambassador and old Etonian Sir George Buchanan, an archetypal gentleman-diplomat, austere and monocled whose tall, slim and urbane figure cut a familiar and respected presence on the streets. In true British bulldog fashion, Sir George stuck steadfastly to his daily walk, even as increasing danger and anarchy saw the city dissolve into chaos around him.

His formidable wife, Lady Georgina, like her husband was tainted by the social snobbery and racial prejudice of their generation and class, and she presided over genteel tea and cocktail parties of the British Embassy. Lady Georgina was the self-appointed grande dame of the colony’s war work, and she commandeered the embassy ballroom for twice-weekly sewing classes where the women of the British colony rolled bandages and made clothing for the wounded from the front who filled her modest British Colony Hospital.

In contrast to the buttoned-up Sir George, the US ambassador, David Rowland Francis, a self-made millionaire, was a genial Democrat from Kentucky with nil diplomatic experience. The kind-hearted but ingenuous American was minded by his devoted black valet-cum-chauffeur Philip Jordan, far from his native Deep South, and together they muddled through the difficulties of becoming acquainted with all things Russian.

Francis wasn’t a great one for the round of Petrograd society and the incestuous chit-chat of the continental diplomat corps. His flamboyant French counterpart Maurice Paléologue was the most accomplished socialite in the expat scene, and “held the best dinner parties for the smartest and most frivolous set”.

Among those who appear are British suffragette leader Emmeline Pankhurst, who went to Petrograd to inspect the indomitable Women’s Death Battalion led by Maria Bochkareva. This semi-literate peasant girl from the Volga was wounded four times in battle at the head of her fighting Russian women who wanted to set an example to less fanatical Russian men. Many of them were killed, and Bochkareva’s story is a highlight of the book.

British author William Somerset Maugham and American John Reed, writer of “Ten Days that Shook the World”, are also caught up in the social cataclysm as people and horses were shot dead and lynched in the bloody streets. So is an English nurse who had already survived the sinking of the Titanic.

And so, with the first revolution in February 1917, the tumultuous months that followed and then Lenin’s Bolshevik coup in October that year, the flame of revolution duly broke out. Rappaport takes us through chaotic waves of strikes, political agitation, savage vengeance on the police, mobs without a leader or clear objective, rebellious Cossacks and mutinous army units, militias and sacked prisons.

Moscow plays little part in this book, neither does Rasputin or, come to that, even the Tsar.  This is the well-told and detailed story of the disparate group of foreign residents and visitors who saw, felt and heard the bloody ferment that broke out on the doorsteps of their homes, hotels, clubs, offices and embassies.